They hadn't been traveling overly long, only a few hours really. But that they had finally arrived at the village of Kumogakure. The shining beacon within the Land of Lightning. Moving quickly past the gate sign in point he would flash a sign for emergency before passing through. The guards, recognizing him and his chakra signature, let him pass without incident and ensured the path was clear of people waiting for entrance. He had to get to Ryuko immediately, judging by the time of day she would be in the audience chamber, holding court. So that was where the Chunin was heading. He would actually have to put in effort to keep himself slowed down so that his partner, Yenn, could keep up. In the end the few minutes it would have saved for him to run at his full speed wouldn't have mattered. Besides, he wanted to make sure she was near him so that he could keep her safe. So with great effort, the lightning prodigy made his way toward the Audience Chamber where Ryuko Shizu Von Rose, Raikage of Kumogakure and Queen of The Kingdom of Thunder, would be.

Yenn could tell that Tamwyn was trying to keep pace with her as they made their way through the gates of Kumogakure. She knew she would have to train harder in order to keep up with him, as she didn’t want to hold him back, no matter how much she appreciated him by her side. Tamwyn was easily recognized by the guards and the two of them were able to pass without issue. She hurried along, anxious to have the upcoming meeting over with. She had known that they would have to deliver their accounts of the events that had just occurred, but she wasn’t looking forward to entering the Audience Chamber with the news they were carrying. She’d seen the place on television, but she had always imagined that if she ever got to see it in person it would be under happier circumstances.

Shin’s eyes scoured the path ahead of him, ready to make the trek that he had been thinking about for ages – and it truly was ages for nine years had passed since he had last seen home. He wasn’t sure what he would be expecting upon his return, nor if it would truly feel like the home of his childhood. For one, he didn’t know what had happened to his parents all those years ago, the only thing he knew was that he was on his own, now and likely for the foreseeable future. The Raikage had given him leave and the opportunity for him to return to his home in the Land of Stone. Shin was grateful for the hospitality he had during his stay here in Kumogakure no Sato, but it had to come to an end someday.

Taking a step forward, Shin would begin his extensive journey to the Land of Earth.

Kara had a long time to think of what she was going to say when she arrived in Kumogakure. And it had felt like an eternity as she worried about the safety of Damien. In a way this was like a homecoming for her, her family was originally from Kumogakure and she had travelled to and from the great city as a child before her parents eventually decided that slumming it in the desert was the best use of their time. She barely remembered what the metropolis was like, at least any significant details. She had memories to be sure, but they were a bit hazy as worry overtook her. At least her arm didn’t hurt any longer, although she did find that if she wasn’t looking at it she could still feel that it was there. Once she had approached the gate she would fill out the required form, mildly annoyed that the process was written as her current state made the task all the more difficult.

She had also thought long and hard about what name to use when entering. She had used two others before now and it wasn’t a stretch for her to want to identify as something other than what she had been known as in the desert. What she was looking for, hoping for, was a new and bright future. And in that future she saw Damien, still stubbornly holding on to a hope that she was usually pragmatic enough to avoid. Assuming she was allowed to pass she would make her way into the village, hopefully with her companion still at her side, and into a future that would be less painful than the past she had just left behind. 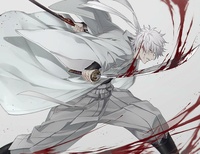 Seigi would approach the gates, nodding to the guards, just to the right of Kara. Their journey had been long and tedious, but finally, he was home. With a heavy sigh, he would hail the guards.

"She's with me. She's good to pass." He would say, escorting her through, helping her carry anything she had needed him to or brought with her that she couldn't carry herself. He was sure if the guards had an issue, they would raise alarm, but if not, the two would pass through, heading straight towards The Raikage Building so things could finally get sorted.

Naganori would simply approach the gates of Kumo, masked as she was, and upon meeting one of the guards. hand them a stack of papers. These are for your City's Administration. She couldn't be bothered to go into the city to deliver the paperwork, and worry about dodging  Anbu. Nagi could do that task some other time. For now she simply handed off the documents referenced in the mission description as well as a copy of the mission itself with Nagi's name and information listed on the back so he could pick up the reward later.

Kara needed to secure her position within her territories, and as such she hired a crew and a corvette to take her across the water. It was a simple affair, commissioning the escort and taking with her a few of her supplies. Stepping onto the boat she turned her face to the open water and her mind to the future.

Kara and Doku arrived at the docks of Kumogakure slightly later than expected. Stormy seas had made the trip take longer than Kara would have liked, but it had given her the opportunity to go over paperwork and begin planning her newest project with Kumo. Doku had been pleasant, if dim, company. While he was an excellent combatant, a scholar or academic he was not. He thankfully gave up asking for an explanation for every word longer than three syllables that she used. At least he’s pretty.

Yenn had made haste to the gates once she had sent a message to her children’s nanny. She didn’t think the mission she was on would take long, a few days at most. With her she had nothing but her clothing, a hunting knife and her Gauntlet of Thunder - as usual. Yenn needed very little to survive and in fact would have been just fine without any of those things. With one final look over her shoulder in the general direction of her home and her children, she set out to the area indicated by Shimiko.