Diana sat inside a building she had only ever seen a few times while in Iwa, the Jade Dragon. Apparently it was owned by the previous Kage, and that even now it still served some of the best tea inside Iwa. It had been over a year now, and she was still living inside Iwa. Verneuli Korikane's influence had died down ever since she took up acting clan head of the Korikane Clan, and with Yui Kotōshura being having given her control over managing the funds of the Kotōshura Clan, she was effectively running two clans now. It was new, different. Comforting. Confusing. It was starting to make her want to leave, the responsibilities piling up again and the need to escape it all was starting to bear downonher-

Pause. Diana Moneta did not panic. She took a breath, letting go of the stress as she pulled out her old work sketchbook, the same one she had shown that Yuki girl Sayuri. If she could help a scared and stressed child with problems beyond the scope of her control, Diana of the Korikane could figure out her own problems.

By all accounts she had kept her word with Masaru Tetsudashi, and yet...she didn't feel like she had held up her end of the deal completely yet. It was why she was here, inside the Jade Dragon, contemplating her place within the world once more. In a way, she was looking for guidance, hoping to see if the spirit of the Kage would come to her in some form. It was a little silly, but during her travels she had seen strange sights that were thought to me folklore. Perhaps something like that would be possible, if only for a moment. Because of that she had decided to order Chamomile Tea. Supposedly it helped both physically and spiritually. 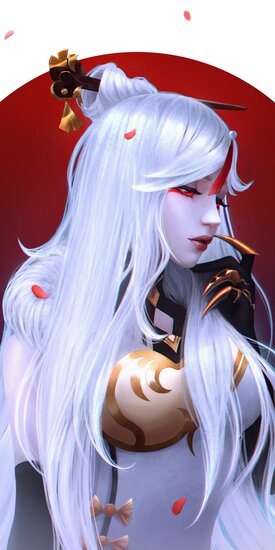 Feeling particularly melancholic, Mitsukira had decided to torture herself by going to Masaru’s tea shop. The torture wasn’t intentional, not even conscious, but something about the place drew her when she felt sad and alone. She nearly always felt sad now and also nearly always felt alone. It wasn’t that she was physically distanced from everyone, even if she wished to be most times now, it was that somehow she felt estranged from the comfort that groups of people had brought her before. Where once she had seen brightness and excitement in a bustling marketplace, now she saw only fear and suspicion. She wished that she could go back to a time where she didn’t know those feelings and be the innocent Mitsu once more. But the Universe had other plans as always, and just like always those plans had nothing to do with the whims of a tiny dancer.

The albino woman walked through the doors of the Jade Dragon, attempting to put a smile on her sleep deprived face when she spied someone sitting at a table. Someone she had never met in person, but she knew from reputation. Diana, she believed her name was, at least based on the paperwork she went through constantly to keep the village running. In charge of the finances of two clans and also the village’s top crafter if she recalled correctly. A good sum of money had been set aside to aid the woman in her strengthening of the infrastructure of Iwagakure. And from reports that money had been put to good use. Seeing as she was miserable anyway, she didn’t see the harm in potentially being turned down if it turned out that the woman wished to be alone. Or perhaps just wished to have nothing to do with Mitsukira, which honestly seemed more likely. If she was shooed away it wouldn’t be as if her day was ruined, Mitsu was already exhausted and anxious and one more rejection wasn’t likely to be the tipping point.

Mitsu walked up to the counter and after a brief exchange with the tea shop manager she learned that the woman had ordered chamomile tea. “Make it two then, and I’ll take it over if you don’t mind.” “Not at all, Tatsudashi-sama” She spoke quietly to the man and waited the few minutes it took for him to gather a second cup and place two cups and a pot of chamomile tea on a tray for her to carry over.

Making her way over to the woman with the tea tray in both hands, she saw Diana flipping through a sketchbook. She was insanely curious of course, but did her best not to peer at things that were none of her business. Instead she would approach the table and gently clear her throat, her melodic voice softly piercing the stillness of the tea shop. “I hope it’s alright but I brought your tea. Do you think I could sit with you for a while? I’m Mitsukira and Masa- you were always so highly spoken of, I would be honoured if you would allow me to spend time with you.” Her words were hopeful but with less confidence than should have been there, her pink eyes searching for something within the woman as she waited for a reply.
_________________

For the second time in as many days Mitsu watched with deepening horror as yet another person fell victim to the plague, right before her eyes. The mercurial ways of the Universe were not hers to understand, she could however take comfort in the idea that somehow everything made sense. Diana was slumped over in her chair, still awaiting her tea that Mitsu carefully placed on a nearby table before rushing to help the woman.

With a few quick orders she had Diana taken to the hospital where she would stay until she was stable enough to be cared for within her own Clan District. It was disappointing and nonsensical as far as Mitsu was concerned, but as she watched Diana’s form disappear into the distance she could only shake her head and turn with a sigh to collect the tea.