Hark! A Challenge! (The prequel)

Hark! A Challenge! (The prequel)

The plucky swordsman Mōtimā Midori-Okō Kurama aka Mort was, at least right now, bored. He'd been cooped up in his room for the past few days after a stint involving his Id, a rake, and a carton of milk. Combining that with the clan leader taking away his sword those couple of days he hadn't been able to practice. For him, it was a perfect storm of events that prevented him from being able to do anything fun. But it was different now. Now, he had access to both his sword and the outdoors again, and he'd spend it in the only way a hyperactive 17 year old with a sword could think of: Dueling people and smacking them senseless.

Having spread a few fliers around Kumo in a desperate hope to get some takers, he had spent a good while trying to find a nice open spot in the 1st ground that would provide just what he needed. And find it he did. Currently he was rolling decently sized logs around the field, making a sort of makeshift dueling arena, with the logs as place markers for the edges of the octagonal ring. Pushing the last log in place he'd wipe his hands and admire his very crude handiwork. It wasn't much, but if one were to take a few seconds looking at the odd arrangement of logs and sticks they'd be able to tell it was an attempt at making an arena. But even so, it was his arena and he was proud of it. 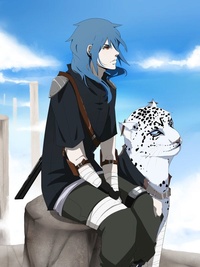 A flyer. Such an old fashioned thing. But a flyer was found by one Shinobi, amber hues reading it over again as the man stepped into the training grounds of Kumogakure--him blinking as he read it again. Someone wanted to duel others for some fun? Arashi, being the confident swordsman he was, decided...why not. Maybe it'd be fun. Maybe he'd learn something from this. So he would come into the training grounds, flyer in hands--him in his normal outfit and his sword held over his back--a simple Chokuto. This would be some good fun before he left Kumogakure in the following days.

The young Inazuma yawned as he stretched, he'd been getting things prepared for his departure, but figured this could kill some time. He'd continue into the training grounds until he spotted someone, blinking. Was this the one asking for challengers? He'd approach, as he did the man could see a makeshift arena of logs and sticks. Fair enough. Probably whom he was looking or as he approached Mort, stopping about 5 meters way.

"You the one who put up the flyers about wanting some challengers for a duel? I'm game." he'd say, his voice confident, him smiling as he stood there, facing the other Kumo nin. He'd hold up the flyer, presenting it with his signature toothy grin--a subtle breeze pushing the man's lengthy azure hair.
_________________

Wiping the last of the silly remnants away, he'd turn around to the sound of what he could only assume to be his rival for the day. Taking a quick moment to compose himself, he'd spin around on 1 heel and look at the newcomer through a hand covering his face, clearly attempting to look 'cool and mysterious.'

"Ah, why yes! I am the one who put up the flyers! I'll admit I didn't expect someone to show up so soon, but that won't deter me from saying no! He'd give a large grin and lower the clearly awesome and not dorky 'cool and mysterious' look for a more casual one. "Yes, I can tell that you are going to be a great challenge for me, and hopefully I'll be able to provide the same for one such as yourself."

Eyes shifting from green to a bright gold, he'd grin and start walking into the makeshift ring "Come, come! We can talk as we fight! Though, I probably should ask before we get right on it what I should call you. I myself prefer Mort, but if you come up with some cool nickname I won't mind either. He'd stand on one side of the ring, motioning his guest to come on in and do the same.
_________________

Arashi was met with Motima spinning on a heel, giving him some pose of bravado and confidence, even if a bit dorky. Arashi's lips at on corner raised into a smirk, him trying to hold back a laugh--not wanting to be rude or rain on the guy's parade. He noticed that the teen was younger then himself, probably a little less experienced, but at the same time he refused to underestimate anyone due to their age. Just the other day he was in a room with a woman around three years younger then himself--who could've ended him before he realized what was going on.

He'd listen to Mort, explaining he was indeed who put up the flyers, before lowering his pose and likely giving the Inazuma clan head a more normal expression, cheery at that. Finally, someone else who could keep up with Arashi's cheeriness, only making the blue haired man smile more. Although this didn't stop him from noticing the shift in the young adolescent's eyes, a flip from green to gold, Arashi blinking in slight confusion as Mort had turned to walk towards his arena.

"Ah...om" he would emote in confusion but Mort basically spoke over it, easily missed. He'd express that they could chat in battle, which drew a light chuckle from Arashi. "Mort huh? I'm Arashi Hayate--Head of the Inazuma clan." he'd reply to the introduction, going ahead and following Mort into the arena. "Mort...Mort....how about Morty? Yeah. There we go, its nice to meet you Morty!" he said with a cheery tone and a toothy grin...the nickname probably making Mort wish he hadn't given the man any permission for a nickname.

"Well...if you're keen to start this, what are our guidelines...sword only...hand to hand....all out battle to the death? Haha only kidding on that last one man." he said with a snicker. Clearly Arashi wasn't one to let much get to him, much happier and easy to make jokes then most overly stoic shinobi. Still, he dripped with confidence, and a sense of honor--all written in how he stood, carried himself, spoke. A rare breed.
_________________

Casually walking into his little home of an arena he'd listen to the challenger, Arashi, as he spoke. Mentally he heard a chuckle from his Id as it apparantly recognized the last name, yet to him it barely registered at all. Barely that is. he knew he had heard the name while he was learning the socio-political structure of Kumo, yet nothing was clicking. Once he'd get to a dirt made 'X' in the ground he'd turn around and take another look at Arahshee., no Arashi when his nickname finally struck.

"Hah! Morty! now that's a nickname I haven't heard in a long time! Sure, let's go with that!" He'd bring his hand up to hide some of the laughter. Sure he wanted to burst out, but he didn't want to seem rude. "And I think I recall hearing about the Inazuma clan. You guys have some sort of...what was it?" He'd tap his head a few times as he struggled. "An...elemental bloodline, right?" He'd wait a bit to let the blue haired boy respond before continuing.

"As for the guidelines...Let's say first to either be knocked out of the ring or unable to continue fighting loses. Melee weapons and hand to hand combat only, but you can use jutsu to stay within the ring as long as you aren't attacking your opponent with it. Other then that no killing and no maiming outside of cool scars."

It'd seem he didn't mind the frankly goofy nickname Arashi had presented upon hearing Mort's name, or if he did--Morty here wasn't showing it. He'd tilt his head some when Mort seemed to loose himself in a bit of thought, trying to remember the Inazuma clan's abilities. Arashi reached up and waved off the thought, giving the younger swordsman a smile. "Don't worry about it." he'd add, dismissing his own bloodline's abilities. Someone more arrogant could've been like 'Oh, you don't know Storm Release, for shaaaame--and you call yourself a Kumo nin'...but luckily for Mort, Arashi wasn't the type for that.

Arashi listened to the guidelines of his 'challenge arena', nodding along at appropriate times. The last bit about scars drew a chuckle from Arashi, though subtle. "What you want? Cheek scar, maybe one across the bridge of your nose...or maybe...one of those cool over the eye scars. I don't mind helpin' ya' out with that, might help attract some ladies. The girls love scars." he joked with Mort, the wink after confirming he was kidding around. He'd go ahead and find the 'X' opposite of the one Mort stood on within the 'arena', and stood there, widening his own stance and smirking as his hand reached up to over his shoulder, gripping his sword's handle.

Ah, how refreshing! Unlike his instructors this guy knew how to relax and have fun! Nodding a bit after his sparring mate winked to signal he got the joke, he'd shiftr his feet to take the red tiger style stance. Unless things got really bad, he wouldn't draw out his Id for this fight. Sure he liked drawing upon his more...primal? feral? Well whatever it was it had something to do with a human's more basic instincts, but just as well he hated the migraine that came with it. Instead he'd draw his sword and join in in counting to 5.

As soon as 5 was said, instead of doing the smart thing and waiting to see how his opponent would react, he'd step forward and charge in, sword in tail guard position as he prepared for his first strike. He just couldn't help himself, he finally was able to fight! If one were to look in his eyes, they had a small glint to them.

"So I'm curious, what pushed you to take up the blade Arashi? Why not another weapon like an axe, lance, or even a bow?"

Once he got close enough to strike, he'd bring his sword straight up as he preemptively tried to block his opponents strike with Slashing Sky by sliding their blade out of the way, then afterwards, he'd reverse his swing with a Red Ruby to try and force Arashi back towards the edge of the ring. He wasn't aiming to seriously hurt his opponent and if he did manage to cause serious harm with this strike Mort would pull the attack. Sure this was for fun, but he learned very early that swords were to be treated with respect and 'just fooling around' was never a good idea.