Similar to the General Store, the Weapon Shop had left its door open to bring in the cool air and the sunlight, as well as the sounds of the crowds moving back and forth throughout the village. This place was a little more busy, however, with several customers checking out the many weapons available and a few putting in orders for more specialized designs. Kazuya had come for a few essentials, and though specialized weapons piqued his interest, he was not looking to purchase one today. The Hokage gathered up the many, many weapons on his mental shopping list and purchased them without even having to wait. Everyone suddenly found something other than waiting for clerk when they saw the village leader walk in. He appreciated the gesture, a sign of respect, and while he enjoyed the benefits of it, he did wish on some level for people to not treat him any better. They were all family, after all.

Kazuya finished his purchases, but declined any bags to help him carry it. Instead, he stepped to the side and pulled out the sealing scroll he'd just bought and opened it up on the counter. It was blank, at the moment, but he was about to fix that. Channeling his training back in the mountains of the Land of Lightning, Kazuya recalled the Enclosing Technique and perfectly copied the pattern on the parchment -as well he should, having performed the technique many, many times. Without any warning, the many weapons he'd just bought were whisked away and sealed into the scroll. The Hokage rolled it up, put it back under his white robes, and left the store to continue on about his day. Now that the paperwork was out of the way, he was free to go and train after assorting the many weapons. That is, until the next string in an endless line of Kage duties beckoned him to return to that dull little office.

Strength: D
Constitution: C
Stamina: A
Speed: B
Coordination: A
Intelligence: B
Perception: A

Entering the weaponry store Gin came with pockets bulging with cash to spend on new gear. As a Chuunin of his village Gin prefers to wear the standard load-out many Shinobi are seen wearing, which is provided by the village's armory. A pair of black combat sandals cover both feet leaving the toes and heel open securing up to his ankles. He wears a pair of common synthetic black pants personally having the bottoms wrapped in white bandage wrap to prevent it dragging or getting snagged. On right his thigh is a blue rectangular holster secured and backed by white tape. Gin wears a black single utility belt tightly secured to his waist. It holds one blue holster on his right side as well as a beige carry pouch around the back side of the belt. His torso is covered by a long sleeve black shirt, the upper sleeves donning the Konoha emblem stitched in red material. Over his shirt is a slate gray colored flak jacket which is zipped up and secure on his body, provided with six scroll holsters across the torso.

His forehead protector is secured across his forehead, the cloth colored blue and with the steel plating facing forwards showing the Konoha emblem in plain view. Gin is a tall, lean male standing at 6'2 and weighing 175 lbs. He has a broad, moderately toned figure with very minor visibility of veins on his forearms. He has a tan skin tone accompanied with rich hazel eyes and medium length brown hair stopping briefly past midway down his neck and shortly past his forehead. Because of this his forehead protector is partially covered by his hair though not greatly inhibiting identification. Gin went to buy a meteor hammer, shuriken and kunai so he's not completely defenseless. 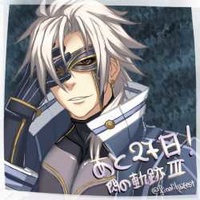 Clad in his unique shinobi attire consisting of a formfitting black shirt and trousers with a classy blue coat over that and a half mask hiding the top half of his face, Ziegfreud stepped into the general weapons store to get some basic weapon supplies. His black shinobi boots made a soft clopping noise as he walked over to the shelves to grab his stuff and as he headed over to the counter, he greeted the clerk.

His black gloves could be seen as he laid his merchandise out on the counter for the clerk to tally up the price, at whichpoint the clerk responded with a "that will be 56,250 ryo, sir."

After having left the General Store, Raname came to the weapons shop. Here, she gathered a few weapons. Among them she picked twenty kunai, twenty shuriken, some steel wire coils, a nice tanto blade, and a hand full of chilli pepper bombs. She took them to the counter and placed them there for the store clerk to ring up, and Raname paid the amount that was given. She had only a little bit of ryo left over after all of today's transactions. She'd have to go and earn her own money now. Gathering her materials, she then left the building.

Michiko was super happy. She was singing a song as she followed after her Father, singing in her cute little girl voice, "Get up sleepy head, rise and shine, today everything's gonna be mine, la la la...."

The sun was bright in Konoha today, and a few clouds passed in front of the sun, giving shade for a brief second before the sun's blistering rays returned to the highland forested country called Hi no Kuni. People busily went to and fro from shops and on towards the offices, etc. Some older folks smiled at little Michiko. They always seemed to enjoy seeing the young ones who were eager to begin their Shinobi Training. Michiko's Father, Tadashi, would bow his head slightly at an elderly woman who greeted them. He was proud of his daughter. She would surely grow to be a fine Uchiha warrior like he was. Only....he hoped that she wouldn't end up on his path of being overworked and not enough time for her family. However, sighing, he had to remember, he must enjoy this little time he did have with her.

"Come, Michiko-Chan.", Tadashi urged the little girl into the shop. The child skipped into the store with a hop and looked about the shelves and walls, exclaiming, "OOOooooo!"

"Yes, there's many ninja tools. We're here to get you the ones you'll need most to get started.". said her Father.

Turning her eyes up to her Dad, Michiko asked with a smile, "Like the kunai and shuriken you let me practice with at home?"

"Woooo!! Daddy, I'm gonna have Sharingan like you soon, I know it!", Michiko giggled.

Tadashi's smile faded, and he replied, "Hai...", but he'd fake a smile again, not wanting to look troubled at his little girl's eagerness to unlock her bloodline trait. She didn't understand really what the Sharingan was. It wasn't pleasant. It was a tool for war and a product of suffering. She'd learn that some day. For now, it was better she enjoy her innocence while it lasted.

The seasoned warrior would show to his offspring which items she would need and that they were buying for her, and she identified them by name and function as he showed them to her. She answered everything correctly, showing she paid attention to their lessons. That was good and a relief. It meant that hopefully, she would do well in the Academy, even in his absences from the home. Besides, his brother Ryudan was just as good as a teacher as he was, and then she'd also have her Academy Sensei, so all should be well, right? Yah...nothing to worry about.

"Ok, all ready!", Michiko giggled, pushing her basket onto the counter and placing also several large objects on the counter. Her little eyes glittered looking over the sleek tanto blade and the huge fuuma shuriken. She really was excited to learn to use those with proficiency as Tadashi had....perhaps one day. He would have to ensure she became such an Uchiha. Michiko's life was about to change.