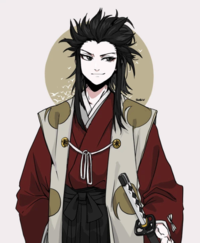 "I've finally become a Genin," Senju, Tokugawa; a now fresh graduate from Konoha's ninja academy, speaks gleefully. Beneath his dangling feet, a view of the village like no other can be observed and above him, the suns rays kiss his exposed skin with warmth. A gentle wind passes and carries a scent of pine in its breeze. I'm not dreaming anymore, thought Tokugawa. This feeling...it's really real!

Today, Tokugawa dressed for comfort. His black hakama bottoms were of the finest quality and his sand colored Geta  had been polished in preparation for a later graduation ceremony. Tokugawa's mother had even gone to great lengths, making sure that the red Nagagami was ironed, pressed and fresh for the day's event; though, most impressive was the hand-crafted sleeveless Haori which had both the Senju clan insignia emblazoned on its back for all to see and a smaller golden pin on Tokugawa's right chest of Konoha's village symbol. Once an instructor from the academy had tied his headband signifying successful completion, Tokugawa rushed to embrace his family and then after some time, separated in order to visit a place that he'd found only a few short weeks ago with an amazing view of Konoha.


This place wasn't actually a place in the sense of buildings but stood high above most as a water tower. To those looking up from below, Tokugawa would appear as a small spec on a large navy blue hunk of steel - not exactly the most ideal place for a young boy but Tokugawa didn't seem to mind. He'd been too focused on how beautiful the view was and marveled mostly at how the light hitting the trees and buildings made for a serene and tranquil atmosphere. "This is...it's amazing!" He'd say, smiling openly.  Aside from the view, there was one other thing that Tokugawa loved about this place and that was it gave him a quiet space to think.

He wondered about how much his life now would change with him becoming a Shinobi and more importantly, he hoped that he'd be able to make lasting impressions with his peers. Some, he thought, might even become good friends but he'd have to really work hard for that to happen. Naturally, he considered how his father felt when he'd become a Shinobi and while there wasn't an urge to compare experiences, Tokugawa did wonder about how his Father handled the pressure of rising through the ranks. Having been taught some things about the Senju clan history, Tokugawa was no stranger to expectation but he never quite developed a hard desire for competition. Even now, he saw himself acting more as a support role in any assigned squad but wasn't indifferent to leadership, either. In truth, he didn't know what to expect and perhaps it were this lack of knowledge about his future that gave root to concern.

"I'll just have to wait and see, for now." Leaning back, his feet still dangling over the edge, Tokugawa rested on his arms and looked up at several passing clouds. What the future held for him was a mystery; though, he was certain that it'd be a new beginning.