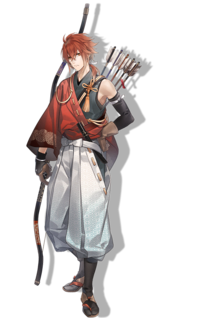 It had been a while since the large man had made his way into Sunagakure, at least a month or so, but that was to be expected. The last time he was in town he had gotten new tools and didn't really need anything from the people. But, of course, he had decided to fight a beast that was too strong for the weapons that he had bought. While he was fine after the conflict, they had been broken into bits and because of that, it was time for him to head back to the village. He would have finally arrived within the village around the mid-afternoon, strolling down the streets of the more rural areas and browsing the smaller shops that existed around the area.

As he walked through the area, he was getting waves and small acknowledgment from the people that he's met over the years. It was hard to miss Athos in a crowd seeing as he stood a towering six feet and seven inches tall with a mess of red hair resting on his head, his longer hairs tied in a ponytail behind his neck. He wasn't expecting any troubles in the village, so he was dressed a bit more casually than normally. He wore a red Hakama with golden decals along the sleeves, with a pair of white gi pants, and black sandals/socks to complete the outfit. His soft amber eyes browsed the area while an aloof expression rested on his face, his mouth rolling the piece of sweetgrass in his mouth from one side to the other. Currently, he approached a fountain with his arms in front of him, hidden by his large sleeves.
_________________

It was a fine day to be out and spending time amongst the people. Meandering here and there and checking on his shops. Okane the grand merchant. A man who came from money but had built himself one of the greatest financial outfits known to man to date. The Stag emporium sold absolutely everything. Well everything one could legally sell anyway. It did not busy itself in the medical or skin trade much. No sex workers or slave drivers. If anything it seemed to be a fairly morally upright company. No one seemed to have anything poor to say of the grand merchant and many spoke of his flying wonder. The heavenly Emporium itself. Yes Okane prided himself in being generally loved or at least liked by almost everyone. But what was most important to him was being known. If one was known by all he was remembered by all. All this effort and showmanship was to establish Okane in history as near deity level. To be spoken of for generations. He had even managed to gain a royal princehood status in Iron for his efforts. The land of Samurai even respected him. So he was rather enjoying life and wished to be recognized.

Despite the heat of the desert Okane walked alone in a long black fur coat that seemed to be keeping him cool rather than overheated somehow. His dark hair hung about his shoulders and down his chest with gems and jewelry imbedded into it. Under his fur coat he was wearing a fine black set of robes with silver and gold trimming. With no weapons on his person to speak of save for a cane with a green jewel at the top and a golden dragon coiling halfway down to meet with a rising silver tiger. He used it as a decorative walking tool he clearly had no need for. If one observed him they would watch as Okane would seem to almost glide along instead of walk. He appeared so graceful with porcelain like skin that whenever he moved golden petals would seem to form from him and fall to the ground before fading like dust. He seemed almost mystical in nature despite being an impressive man of science. Still his glowing jade eyes would shift to see one man stranger than the rest. Tall and built like he might strangle a gorilla this red headed fellow seemed to stand like a boulder in the crowd. Clearly interested in some weapons at one of Okanes shops.

Okane would glide closer to him as he shifted. A great many in the crowd would nod to him and some would even bow but mostly everyone around the two seemed to carry on about their business. It was common for Okane to approach a client and it was considered rude to approach him first in most cases. Still when Okane spoke his voice was like a lullaby on the ears. Soft as silk and smooth as milk. Almost mesmerizing to listen to.

Athos had been deep in thought while standing outside of the window belonging to a decently sized weapon shop. The man's brows would furrow together, with a head tilt to increase the confusion that he had. How long had it been since he was in town? He thought it was only a few months but... Was it years? No, no. That was impossible... Unless... And that was when a voice would break that train of thought and bring the man back to reality. The large male would blink a few times before his gaze would fall onto the figure that stood next to him. His hands stayed hidden in his sleeves in front of him, holding onto the other's forearm gently. His soft gaze would rest on the man's features a few times before he'd speak, "So you own this shop now, huh. What happened to the old place?" He had come to the old shop that was here a few times when he was younger but the shop owner had been old...What happened?

Regardless, he had shrugged off the part about being a warrior and decided not to address it. With a casual shrug of his shoulder, after waiting for Okane's answer about previous owner, he'd answer his question, "I'm looking for more tools to help me out in the desert, get some new weapons. See if anyone needs help." At that moment there was a loud grumbling noise that would come from his stomach, like a beast preparing to pounce, "Oh, and definitely, some kickass grub before I leave. Is there anything in this shop worth using?"
_________________

Okane would smile as he asked about the old man before his eyes would shift to the shop and look at their own reflection in the window. He was fond of this shop and it showed in his soft smile. He would speak up once more in reply. "The old man if well. He was struggling financially so I stepped in. He runs this shop with an apprentice now as an employee of mine." Of course Okane wasn't interested in displacing people. Especially not ones with talent and an existing clientele. It was simply more profitable to put his brand on it and ensure it was quality work. The old man of course wasn't Okanes equal but he made superior gear all the same. A valuable man. Of course Okane liked that in people. Value of skill over value of character. Still the man would mention needing new tools and a good meal. Of course Okane would chuckle as he resisted laughing at the question. This one had lived under a rock somewhere not to recognize Okane on these streets. It was almost odd not having someone sing his praises but instead question his work. Amusing enough that it reflected humor in his voice.

"My dear giant I assure you anything the Stag emporium provides is of the highest quality. I do apologize if my amusement comes across as rude but it is so rare these days for me to come across someone who doesn't immediately recognize me. I should introduce myself of course. My name is Tomi Okane and I am often referred to as the grand merchant. Almost every non shinobi in Suna is employed by me in some form or another if they seek employment. You say you are looking for work my good man? Well then perhaps we should share a meal and discuss business. I am sure someone of your stature is highly capable. Do come along with me won't you? To Stag tower of course."

With that Okane would pat him on the arm. Barely enough to be felt as he wasn't by any means particularly strong. Yet when he turned to lead the way it was with such grace, he may as well have been floating. Golden flower petals seeming to shower off of him and fade away before touching the ground. If one didn't know he was but a man they might assume he was a being straight from some myth. Of course Stag tower wasn't hard to spot even from where they were. A huge tower touching the skies in the center of Sunagakure. With the symbol of the Stag on top of it all for all to see. A magnificent skyscraper and the center of industry for the entire village.
_________________
Character Name: Tomi, Okane
Spendable Experience: 290
Total Experience: 5440
Renown: 4600
Ryo: 2,064,100
Stats: