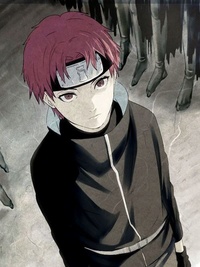 By some sort of miracle Shiro had managed to come across the one shop that still held goods that hadn't been robbed either by gangsters or other misfits. So, as the laws of the jungle in this forsaken village dictated, the goodies were his to scavenge! The young boy didn't even know this shop belonged to Kara. she had told him she held a shop somewhere in the village a couple of years back, but he'd never visited. Perhaps if he had known he would have at least hesitated in this endeavour, but in the dog eats dog world that was the Hidden Sand Village during these times, Shiro didn't hesitate in entering the shop and taking virtually everything of value inside.

Perhaps he would be able to repay Kara one day. But today he needed money for puppets and other tools, money that would allow him to be a better shinobi and better defend his own village. This was of extreme importance to him. Robbery in order to achieve this goal was not something beneath the young boy. In fact, it sort of excited him. He'd never been able to afford decent weaponry, but the amount of money he'd found would pace the way for his creativity with the puppets. He didn't even need to break in, since the door was unlocked as if someone had left in a hurry. His activity wasn't suspicious at all. 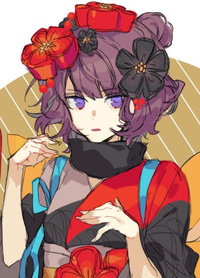 Finally freed from her obligations with Shiro, Ei pursued after only a mere moment of dreading her fate and collecting the Jounin who had been ‘guarding’ the building before. Apparently they had decided to sit that fight between Ei and Nozomi out, and personally she couldn’t blame them. Now that things had settled down though they all needed to be whipped into shape again, even if that meant a bit of a stern talking to. Kara’s path would be followed, the team of Ei and her Jounin squad never being too far behind. Getting to the gates just after they had closed, Ei would scowl. She was clearly aware of what was happening here. This was all so tiring. One thing after another seemed to be going wrong already. First that skirmish with Nozomi, then the situation with Shiro, now Kara escaping. Things seemed to be getting worse and worse. It was already too late to chase after the woman though. Instead the search would be started. Not for Kara, but any traces of her.

Her shop, the Serenity Shinies, would be the first target. Immediately it would be ransacked, turned over by those three Jounin and a large number of Chunin assisting. Anything of value that wasn’t nailed down would be seized, along with anything that could give a potential clue to her further location. That was the plan, at least. That was the plan. It turned out that she wasn’t the only person to think to go to the Serenity Shinies. Although given that she had just seen Shiro mere moments ago, at the Kazekage’s office, seeing him once again here was a shock for sure.

The bridge of her nose would be pinched. Already off to a terrible start.

“Shiro Su-” She was about to address him in a serious tone again, but she stopped herself. What was even happening here.

She pointed towards the Jounin, then to the shop. They would begin in a moment’s notice, beginning to rip the place apart in their search.

“What are you even doing here?”

[Seizing everything in the Serenity Shinies- All of Kara's Items and Ryo [From Shiro?]]

Everything had went exactly according to plan. At least the plan he had designed as soon as he entered the shop and realized the absolute entire mountain of money and items that were left there, completely unguarded. Shiro might not have been able to get ahold of the Kazekage hat and become supreme leader of this settlement, but he was now a rich man! Finally, his time had come. Destiny, fate, whatever had blessed him with the greatest reward for his work!

Truly the child was happy. He didn't have absolute power, but at least now he had absolute wealth! He'd open the door to exit the shop. A miriad of items on his body, a strange suit under his arm and all sorts of shiny objects inside a cloth bag he'd found, thrown over his back. In addition his pockets were overflowing with stacks of ryo. When he ran out of space inside his pant pockets he started filling his jacket pockets and when even those got full he just started shoving ryo down his pants and shit. He didn't want to risk going home to store part of it and returning only to find someone else had taken everything. But being able to carry so much, Shiro was extremely happy!

that is, until he heard a familiar voice shouting not only his name but half is surname as well. That probably meant he was half royally fucked... A shiver ran down his spine as he recognized the voice speaking to him. As he stepped out the door his examined his surroundings to find the colourful robe of Ei Kagawa and her terrifying expression looking at him.

"I'm scavenging! And this is mine! I found it first, shoo! You got the pan, this is mine!" He'd wave at Ei and her ninjas to go away. letting ryo fall off from his sleeves. "Is there nothing you won't ruin, you vile woman? They won't let me do missions anymore, but now I'm set for life!"
Ei Kanagawa

“Scavenging? Is that really what you’re doing?” She would stare down at him, her expression blank. Ei definitely had ‘disappointed mother’ energy right now. Was that what this village had turned to? Even little boys like Shiro had to go around to random houses to rob them just to make ends meet? How incredibly sad. She felt nothing but pity for Shiro right now, even though he was technically committing a crime. Or at least, he would be committing a crime. It seemed that they had gotten here too late. This shop had been picked clean of any materials or ryo before they could arrive, as indicated by the various Chunin who had their search come up dry. Ei would sigh. It seemed that she wouldn’t find anything of note here. Given that she had heard from the gate guards that Kara had already left it meant that she was only left with one course of action now.

“You shouldn’t have to worry about money… You’ll be provided for by the village, along with all the other children. There’ll be no need for you to steal anymore. Do you understand?” Her voice was harsh, but there was a softness underneath it. She hated the fact that this needed to be said.

“There’s nothing here.” One of the Chunin would report, and Ei would give a small nod of her head moments after. They had ransacked the place but it seemed everything of value had already been stripped down. There was nothing that could be done.

"Yes, I'm scavenging, it's the only thing left to do around here!" Shiro refused to tell her of his plan to gather supplies and leave the village that night. He was worried Ei might show up and ruin his da-well, night in this case. As she seemingly did with everything else. The woman had a talent for ruining the good things in life: coups for power, fancy kage hats, perfectly good frying pans, being a ninja and now finally scavenging.

Her promises of not having to worry about money or anything else was completely meaningless to Shiro. He didn't know any other sort of life style and besides he could be an incredibly stubborn brat once he'd decided he didn't like someone. And every time Ei spoke to him and tried to ruin his favourite hobbies, Shiro disliked her a bit more. It wasn't a true dislike. Shiro was too busy doing his own shenanigans to waste time hating anyone. His dislike was more of an "I'm definitely not happy to see this person here" sort of feeling. Which led to him being stubborn, which then led to Ei being responsible and admonishing Shiro for his actions, which would theeen lead to Shiro disliking her even more, which...

Well, you get the picture. It's not exactly the cycle of hatred depicted in the main series, but this was our unnatural lucky hero's own struggle during the current times and that's the one you'll have to put up with, at least for a while. "I wasn't stealing anything, I found it left unattended, it's entirely different. The sacred laws of this land say "Finders keepers"! I'm sure that's written down somewhere...isn't it? Well either way, you can't buy me! "

Shiro would blink twice when Ei gave the order to tear down the whole thing. He was absolutely shocked by the level of commitment and the complete lack of boundaries she demonstrated. "By the Sage woman, I was only gonna take a few spoons and maybe a new tea cup. But you're taking the whole building with you! Show some pity, I'm sure that belongs to someone." ah yes, the old "I'm a morally superior thief" trick.
Ei Kanagawa

“It’s necessary. I’m not taking the building… In fact, if you wish to take any tea cups or spoons from the building before that, I suppose you can feel free.”

Why was she allowing Shiro to plunder an abandoned shop? There was nothing wrong with it, Ei supposed. It wasn’t as if there was any reason to stop him from taking a bit for himself. At most it would only be valueless trinkets anyhow. It wasn’t worth denying every little thing from him, even if scavenging like this was something she wanted to root out from this village. Even Ei had a heart.

“You should take whatever you wish, I suppose, and then evacuate yourself from the premises. Try not to make a habit of stealing, or scavenging like this in the future.”

With a sigh, Ei would turn around and exit the shop, allowing the Sunagakure shinobi to get to work.