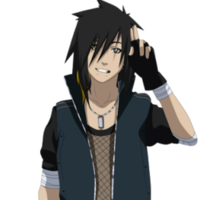 It was a quiet day really, too quiet for Makoto. He didn’t usually like to talk all that much but even still the village was quiet. At this point there was no other thing better to do than to train. He lifted up his hand and examined it as the Kikaichū made their way across his hand. Most people thought his bugs were weird and gross but he figured they were a complex species and difficult to understand if you weren’t from the clan. Speaking of the clan , he hadn’t learned any jutsu from anybody, which he needed to be a true Aburame clan leader. He chuckled at himself and put his hands in his pockets and walked to the training ground. Although he was quiet he still managed to smile at all who looked at him, most of the villagers were known to be Uchiha or Senju whom you notice from their clan symbol or Hyuga whom you notice their eyes at first glance. Out of those clans Makoto listed he respected the Senju the most, the power to be able to stop both of the Doujutsu user clans from complete destruction of each other and mold them together to be one village, which was quite weird seeing that the Hokage was an Uchiha.

He arrived on the training ground wondering about what jutsu he should choose to learn. There was always the basic clan jutsu all Aburame should know about so he started with those. Starting with the Human Cocoon Technique. This technique basically acted as if it were a sleeping bag essentially, seeing that it was a D rank it wouldn’t be hard to master at all, Makoto was more than capable of learning it no problem. He began to walk up an tree focusing chakra into the bottom of his feet, that of which he learned in the Academy. He waltzed onto a limb as the Kikaichū began to swarm around him quicker than his eyes could keep up with as they built sort of a sleeping bag around him, it was strong and it was packed tightly , fairly interesting in Makoto’s head. He dispersed the insects at once as they flew within 75m of him. This was a jutsu he had heard about but assumed wasn’t that hard. It was called Insect Jamming Technique. With this technique , you are able to confuse any sensory ninja by having the Kikaichū emit a small amount of their hosts chakra through out the area. This confuses sensory shinobi by quite a ton as it shows as false chakra images and signals to their senses. Makoto , not having any sensory techniques at all, he didn’t know if it worked our not but .. if it ever came down to it he would sure try it in an emergency. He chuckled as he jumped down from the tree as the Kikaichū floated back to him into his sleeves. There was an jutsu that Makoto’s father told him about not too long ago that he needed to use if he ever needed to know about surroundings before he arrived there. Apparently all he needed to do was concentrate his chakra through a piece of wood and insects would come to him with the information he needed. Insect Gathering was the name of it. Makoto formed the Ram seal and then put his hand on the tree he just climbed as his chakra concentrated itself through the wood drawing insects of all species, spiders, ants, termites you name it, it was there. Makoto didn’t get much from the information seeing that he wasn’t intending on asking a lot of questions .. it didn’t matter to him if anybody had been in the area or not. He decided to move onto his next jutsu. He already had 3 down and some more he wanted to work on. Makoto’s IQ was off the charts for his age so learning these jutsu only took one time, he didn’t even have to see it and its not like he needed any hand seals for most of these. Although one thing Makoto loved the idea of while in the Academy was clones. Many aburame new how to make insect clones. Its one of the very first jutsu you learn as a Aburame and Makoto was going to learn it right here. The clones flew out of his sleeve and began to form an image just like him, but Makoto knew there was no way the clones could speak it would be impossible. Bugs only communicate with him through touch and other insect things such as buzzes, but not actual sound. Makoto thought while he had the clone here he might as well should try some taijutsu with it. The taijutsu was called Arhat Fist and was known for using brute force to achieve its movements and strikes. Makoto formed a stance moving him left foot back and put his near his waist, he opened up his right hand to an open palm and had it aimed towards the clone. He swung a couple times, striking the clone to see what would happen upon a strike, the insects would dissipate for a split second before coming back together to form the clone again. Makoto smiled. He knew he would have fun with this one. He decided to try his first taijutsu move, Rising Knee. He would move as fast as he could which wasn’t all that fast at all and bring his knee to the clones upper abdomen as the clone would as he expected dissipate and form back together next to him. Onto the next move he thought to himself. Shoulder Charge was next in line and he was ready to attempt it. Makoto lowered his shoulder and put all his weight into a push towards the clone attempting to beat it, the hit on the clone only slowed him down a bit as he sort of went straight through it do to the dissipation of the clone, luckily he caught himself just as he was about to bust his face. Next move up was Shatter Palm, this was a lit bit harder of a move but nothing at this point was too hard for Makoto Aburame. He accessed his posture again and swung his right arm back and thrusted a palm strike right into the chest of the clone, once again it dissipated. Then with that he moved to his left hand and delivered a strong palm with an upwards motion towards his clone attempting to break them up that way, of course it didn’t work. Once again they dissipated but Makoto had no problem on that, at least he knew they wouldn’t fail him.

Makoto would break down the insect clone as they formed into his sleeves again. Of course the amount of insects weren’t to the original he had. Which means he got to fill up on insects with one of his favorite jutsu of all time. Secret Technique: Insect Cocoon, this gave him the ability to have the Kikaichū reproduce at extreme speeds which was helpful for him seeing that he used them at such a high rate. He formed the seals quickly and concentrated chakra over the course of his body, Ox → Dog → Bird → Ram. He began to hear the soft buzzes get louder and louder, then he released the jutsu to move onto his next jutsu to practice. It was a Aburame clan favorite, Insect Deception. Makoto grabbed a nearby tree limb and put it to the side to begin with. He put his hand onto the ground transferring just a few insects onto the ground so he could perform his jutsu with perfection. At once he threw the limb into the air as the Kikaichū hoped onto the stick and snapped it quickly. In a normal fighting cases the Kikaichū would have absorbed the Chakra of the target quickly trying to end the fight off. Nobody knew the extreme power of Kikaichū except Aburame members but Makoto would make sure they would be known. He thought about it as he moved onto the next jutsu. This jutsu would be fairly easy. It was just like Insect Gathering only these insects didn’t come from Makoto’s hand, they came straight from his sleeve. He walked over to the same tree and pulled an apple from it. Within an instance he threw the apple up as he slung his sleeve to the apple Kikaichū flew out quickly. They formed a sphere around the apple with ease and when they returned to Makoto’s sleeve they left nothing. Not a seed nor piece of apple left. Makoto laughed as he realized how fatigued his body was . This jutsu coming up would be the last jutsu he worked on for the day. The name of it was called Spindle Formation. Makoto had a feeling he would use this jutsu a lot especially while facing enemies one on one. There was a nearby log with kunai stuck in it, most likely from Kunai practice. Makoto didn’t care, he just lifted his sleeve as the Kikaichū formed a spiral formation to attack the log with great speed. They returned back quickly as Makoto sighed . These jutsu were too easy for him to learn and they weren’t much fun without having someone to actually perform them against. He simply stuck his hands in his pockets and began to walk home. It had been a long day for him and he had learned all he could, but now it was time to put it to use. He would be getting a jounin teacher soon.