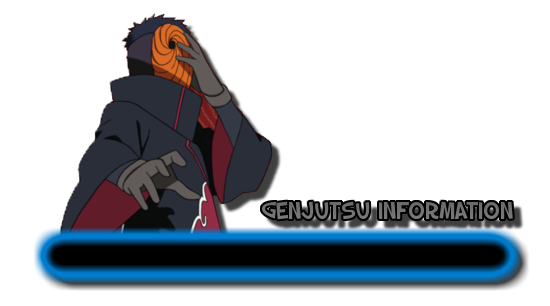 Genjutsu (幻術, Literally meaning: Illusionary Techniques) is one of the main jutsu categories which uses chakra. Unlike ninjutsu, the effects of genjutsu are not real, being only illusions experienced by those who fall victim to it. According to the Second Mizukage, genjutsu falls under the broad category of Yin Release. A genjutsu is created when a ninja controls the chakra flow of a target's cerebral nervous system, thereby affecting their five senses. This is frequently used to create false images and/or trick the body into believing its has experienced physical pain. Genjutsu can also be used to manipulate others - similar to brainwashing - by feeding the victim illusive suggestions. Most genjutsu is performed visually, requiring the target make eye contact with the caster. Other methods include integration with nature transformation, as shown with Water and Lightning Release, and in the anime, ingesting special pills that activate when the target sleeps. Audible genjutsu is deemed the most dangerous because the user can trap victims from long distances. 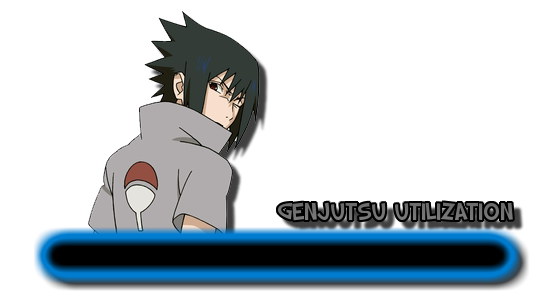 Genjutsu works on these things we've known thus far as triggers. In order to successfully activate a genjutsu one must be able to infiltrate one of the five senses of the body- Sight, Sound, Touch, Smell, Taste. The chakra inserted into the victim following that subjects them to the casters whim - feeding the victims senses signals that things are happening to them that are but merely figments of the caster's imagination. At higher ranks (B+) this can even induce pain into the target. Genjutsu that are more complex and render the target inert or in drastically changed realities are powerful (A or S Ranked) and tend to place heavy restrictions on the ability of the user to move in the real world. Some triggers are more subtle - such as making direct eye-contact or a target's gazing upon a finger. Triggers can avoided, but they sometimes may be hard to spot. It's these subtle triggers that can create more damaging effects once they are completed. Others may be more obvious and may be impossible to avoid - but at the cost of a weaker connection that might stand out a bit more and be more easily spotted thereby forcing the target to have to dispel them. This is what we like to call Subtle versus General control, which is what differentiates the types of genjutsu. If you have a more autohitty trigger that is difficult to spot the chances are that you're only going to be affecting a target's most basic senses while a more subtle trigger will be more effective in the illusion's application as it establishes a deeper connection into the targets brain. If a sense becomes blocked however so too does ones ability to influence it. This is where techniques like Hiding in Mist and Hiding in Fire and Ash are troublesome as they block the visual avenue of genjutsu, forcing one to rely on other senses to manipulate.

General Triggers - Direct triggers cover things like area of effect genjutsu that triggers all those standing in a pre-determined area. Examples include: Hazy Genjutsu, Temple of Nirvana, and Sly Mind Affect.

Subtle Triggers - Indirect triggers cover things Eye contact, looking at specific limbs or the body as a whole, and triggering based on smell or taste. Examples include: Genjutsu: Sharingan, Ephemeral, and Bell Ring Genjutsu.

Occasionally those skilled in Genjutsu may choose to layer their illusions so that releasing one triggers another. Other times Genjutsu users may choose to have two illusions take place at the same time. Casting multiple illusions on the same opponent is known as "stacking". Horizontal stacking is when you have multiple genjutsu take effect at once. Vertical stacking is when you have one genjutsu in effect at a time but they are layered in such a way that the release of one precipitates the beginning of another. Shinobi engaging in horizontal stacking may only have one illusion of each rank in play at once. Also, the use of a single Kai: Release on horizontally stacked genjutsu releases all of them albeit the cost for dispelling each genjutsu must be paid. Shinobi that are engaging in vertical stacking must mention in their technique registration that certain illusions are designed to stack with one another. Unlike horizontal stacking, the user cannot simply layer whichever genjutsu they choose, it must be registered as such prior to use. Vertical  stacking also differs in that it does not limit the rank of genjutsu layered nor does the single use of Kai: Release end the genjutsu layered below it. This is because the ending of one genjutsu is considered the general trigger for another genjutsu that has yet to take effect.

It is also important to note the relevance of a character's stats in deciding whether or not a character knows they are in a Genjutsu.

When it comes to using Genjutsu, you must keep a few things in mind:

- Chakra for a Genjutsu is paid at the time of casting in the form of the activation cost.

Example
Itachi is fighting Naruto and casts a Genjutsu that has a timer of 3 posts. 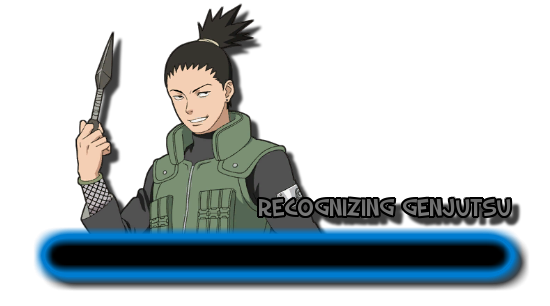 - Genjutsu that are subtle, involving changes in the environment or any of the five sense are considered Perceptional Genjutsu and must first be noticed via Perception check before going about the various methods for breaking it. These are the easiest Genjutsu to learn and use while the most frequently used to set a enemy off course or trick them by giving their brain false signals.

-Genjutsu that are not subtle that involve causing direct pain, suffering, or fear into the opponent are considered Nightmare Genjutsu and must be realized via Intelligence check before going about the various methods for breaking it. These are the most difficult Genjutsu to learn and also the most powerful being able to cause psychological damage (damage is measured by the technique's power and deals damage to the victim's Intelligence rather than Constitution) or stat damage for an allotted time. Nightmare Genjutsu that renders an opponent inert is more likely to exact drawbacks which prevent the caster from immediately attacking their unconscious opponent. The level of restriction on caster's movement will vary depending on the nature of the Nightmare Genjutsu . Drawbacks may also bar the use of clones while the Nightmare Genjutsu is in effect.

- If the Intelligence of the user is equal to the victim's Intelligence/Perception the Genjutsu can be recognized in one post.

- If the Intelligence of the user is one tier higher than the victim's Intelligence/Perception the Genjutsu can be recognized in two posts.

- If the Intelligence of the user is two tiers higher than the victim's Intelligence/Perception the Genjutsu can be recognized in three posts.

- If the Intelligence of the user is three tiers higher the victim's Intelligence/Perception the Genjutsu can be recognized in four posts.

- If the Intelligence of the user is four tiers higher the victim's Intelligence/Perception the Genjutsu cannot be recognized by any allotted time.


Recognizing a Genjutsu will essentially mean you find the flaws passively after an allotted time. This does not rule out the ability to discover the illusion through RP means. This also does not rule the potential of having learned a technique and recognizing it immediately.

Keep in mind that while your Intelligence may be high enough to have general information on the Genjutsu technique being used against you, you may not use this perk for the purpose of realizing you are in a Genjutsu. General information on a genjutsu does not grant you the ability to perceive that you are in one. Once you have determined you are in a genjutsu only then can you use your Intelligence stat to determine which illusion is at work and if it has any specific weaknesses.

Recognizing that you are in Genjutsu is not the same as removing it. This means that once someone recognizes they are in a illusion they will then have the secondary task of dispelling it. 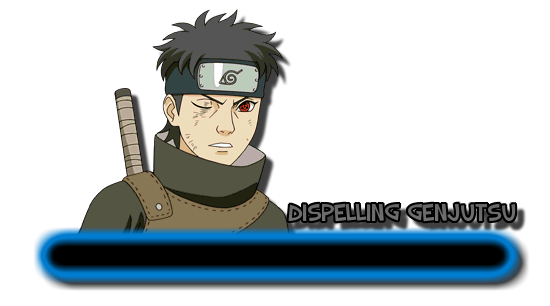 There are several options to combat genjutsu:

Genjutsu Kai:
Name: Genjutsu Kai
Rank: C
Power: Varies
Activation Cost: Varies
Upkeep Cost: Varies
Range: Self/Contact
Speed: Instant
Element: N/A
Skill: Ninjutsu
Classification: Open
Requirements: The user must know that they are in Genjutsu
Parent Technique: N/A
Hand Seals: Tiger
Description: The user concentrates chakra into their brain to expel foreign chakra. The amount of chakra required for releasing from a Genjutsu depends on the rank of the Genjutsu being used (not the cost of the Genjutsu but its rank meaning its complexity).
Weaknesses: In the case of vertically stacked genjutsu, it can be used to release only one Genjutsu at a time

Code:
[b]Name:[/b] Genjutsu Kai
[b]Rank:[/b] C
[b]Power:[/b] Varies
[b]Activation Cost:[/b] Varies
[b]Upkeep Cost:[/b] Varies
[b]Range:[/b] Self/Contact
[b]Speed:[/b] Instant
[b]Element:[/b] N/A
[b]Skill:[/b] Ninjutsu
[b]Classification:[/b] Open
[b]Requirements:[/b] The user must know that they are in Genjutsu
[b]Parent Technique:[/b] N/A
[b]Hand Seals:[/b] Tiger
[b]Description:[/b] The user concentrates chakra into their brain to expel foreign chakra. The amount of chakra required for releasing from a Genjutsu depends on the rank of the Genjutsu being used (not the cost of the Genjutsu but its rank meaning its complexity).
[b]Weaknesses:[/b] In the case of vertically stacked genjutsu, it can be used to release only one Genjutsu at a time

- Pain that is not caused by the genjutsu can bring victims back to their senses. The pain is commensurate with the complexity of the genjutsu afflicting the subject. The more powerful the genjutsu the greater amount of pain it takes to be released.

- Possessing a Sharingan gives one a potent defense against genjutsu as their acute vision allows them to recognise its flaws and influence. They can also free others from genjutsu by inserting themselves into the opponent's illusion and releasing it.

- Kikaichū are impervious to genjutsu because their brain structures aren't sophisticated enough, allowing members of the Aburame clan a method to identify and counter genjutsu.

- Having an ally transfer chakra (equal to the Genjutsu's rank) into your body to disrupt and dispel foreign chakra. Clones do not count for this method of dispelling.

- Strong smells, such as those from Chilli Pepper Bombs, can counteract genjutsu. Although like pain the strength of the smell must be commensurate with the Genjutsu being dispelled.