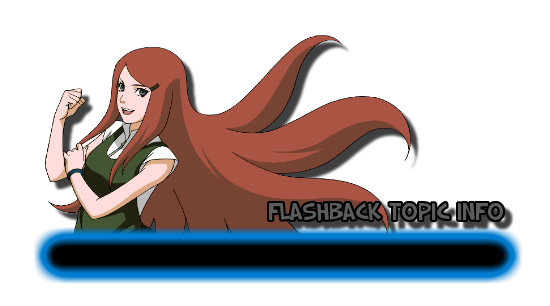 Most topics on this site take place In Real Time (IRT), meaning that they are taking place in the present. Because of this, most characters will be restricted to just five topics at a time, and may wish to continue roleplaying by using a Flashback Topic. Flashback Topics are exactly what they sound like, topics which take place at any time in the past. The exact time frame for when these happen is up to the player creating the topic, and we understand that it may be difficult to keep track of individual character histories at certain times in the past, so it's okay if there are some inconsistencies, but please try and be aware of the history of both the site and the characters involved where your Flashback Topic is concerned.

Generally, a character in a flashback is considered to know what they would have at the time; if your character learns a technique IRT and initiates a Flashback Topic that happened before they learned that technique, they will, then, be unable to perform that technique. Additionally, damage sustained by a character in a flashback topic that is not also present in IRT topics must be recovered in some way prior to reaching the IRT point at which the damage was not present. For this reason, death in flashbacks is generally impossible, and if it does occur, will need to be reversed so that the continuity remains intact. Also, if your character learns a technique or gains an ability that they were specifically noted to not have in an IRT topic, there will need to be an explanation for why they were noted to not have it, such as temporary amnesia, etc.

Experience Points earned in Flashback Topics are halved, while Fame simply cannot be accumulated.
Current date/time is Sun Dec 05, 2021 8:48 am