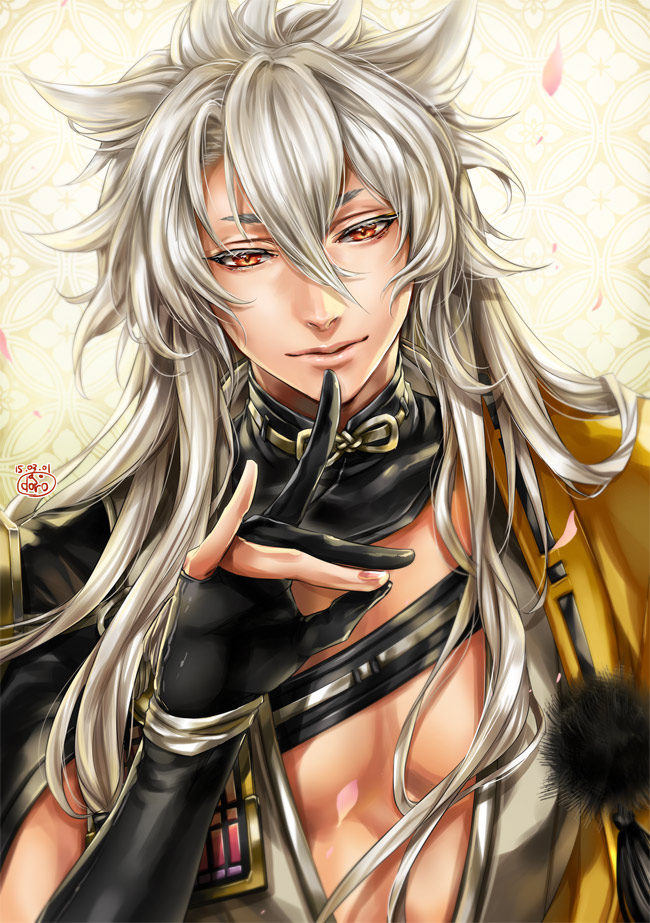 Tengoku had heard a great deal of the heavenly emporium. To him it sounded like something out of a fantasy but almost everyone knew of it. So many people were making plans to go shopping there or just vacation there. It had been deemed neutral ground during the war and so it was perhaps considered the safest place to spend ones money. Or to simply go sight seeing. For a place that all the major nations had agreed was not to be touched was almost impossible. Yet it was true. So Tengoku had packed a travel sack and while he was free from any real duties he had gone to go sight seeing for himself. He had encouraged others to take breaks from training constantly to let their body heal so he had done the same for once. Hypocrisy weighed heavily on him for Konohas actions but he would let his mind fade from such thoughts while he went to enjoy himself. A smile on his face as he chose to forgo the carriage since honestly it would just slow him down immensely. His wolves would travel with him as they had learned to behave in public around people. If anything they craved love and attention from others now more than growling over territory.

Having arrived in the early morning Tengoku had dressed in a white Yukata with a yellow Kimono loosely over it with black lining. Around his neck was a soft black fabric that went down his right arm to a glove that covered all the way to his hand all but two of his fingers. Designed to help his grip on his weapon. Black boots covered his feet and his Tetsudashi steel katana rested on his left hip. His long white hair spilled over his shoulders with his white wolf ears sticking out of them. Amber eyes almost glowed with power but there was a warmth to his smile. As he waited for an airship a couple of somewhat nervous parents watched as their children would pet his wolves with his permission. Once the air ship landed Tengoku and his wolves would flatten themselves against a side wall with their eyes closed. Flying was meant for birds not wolves. So they were nervous to be soaring through the air on anything not meant to fly. Something big and metal fell into those parameters. Still once they landed they quickly exited and took deep breaths.

Tengoku and his three massive white dire wolves would walk down the streets of the emporium as they couldn't even tell it was flying anymore. The scenery was so amazing and it was simply huge. The stories he had heard of this place simply didn't do it justice. People would point and gossip about the man walking with his wolves and clear space where ever he walked but the wolves just wagged their tails and obediently stayed close to their alpha. He even found a shop selling massive wishbones and bought three of them. Giving one to each of them as they chewed on them while they walked happily. Their coats were clean and much like their master their aura was warm and inviting. After a couple hours of walking they would settle with Tengoku sitting on a park bench and the three of them laying at his feet gnawing on their bones as he smiled happily. It was a beautiful place and he could appreciate the crisp air up here. Despite it being a city there were also pleasant smells in the park which made him more comfortable. Truly it was a happy place.
_________________
Character Name: Shinku Tengoku
Spendable Experience: 155
Total Experience: 3,655
Renown: 0
Ryo: 1,855,000

The Heavenly Emporium was a place where violence was explicitly verboten, a law that was somehow enforced without exception among all the Great Nations. So it doubtless said something of Ashitaka's paranoia that he still maintained his Sensing Field while he walked its streets during an activity that was part window-shopping and part patrolling for the few people stupid/crazy/brave enough to act like thugs within the boundaries of its territory. Riding astride his recently-bought red elk mount with his various weapons arranged amid the two of them to cause the least amount of discomfort for them both, he must have looked like something out of a fairy tale, especially given the grandiose backdrop of the Heavenly Emporium. Not that such a thing ever crossed his own mind.

What did register was the distinctive chakra signature of one of the few living people he dared call "friends" from Konohagakure, the place that claimed to be his home village but hardly felt like it since the war started. Still, like any person spotting a rare light in his dark world, he was compelled to approach the signature until it gained distinction, and finally the image of the man was no longer obscured by the nearby architecture. Having forgotten the task set before him, he was just really happy to see the Jounin.

"Tengoku-san! It's really been too long!" Ashitaka said as he dismounted and to the beast's immense credit, Yakul didn't flee or even try to resist being made to approach the wolves that were at least as big as himself. The teen was not insensitive to his creature's feelings, however, and didn't lead it to fewer than a dozen or so meters away from his senior and his companions. His personal attire was comprised of a smoky grey gi, his Transformation Bracers, and a nice pair of moccasin boots; under all of which he was adorned from the base of his neck to the palms of his hands and the balls of his feet with bandage wraps. In his right hand he carried the Modular Weapon Neo, crafted by the Grand Merchant himself and a constant reminder of where Ashitaka's true aspirations (and perhaps loyalties) lied.

Trusting the animal to stay put, Ashitaka released its lead and strode to a more comfortable speaking range of a meter or so and bowed to his customer. Friend. Superior. Kindred spirit. Future Hokage.... In hindsight, Tengoku was a lot of things.

"I'm really glad to see y- ahh... crap. The wakizashi! Please forgive me. I know it's a poor excuse, but this war has been heavily taxing on my time." he said, then thought without saying ...and my mind, but let's not go down that road. To emphasize his apology, he bowed again, more deeply this time.

Tengoku would lay his head back as he stared at the sky. The only time he had felt air this crisp was his time in the mountains. It was nice to feel the fresh air so high above the bustle of man. He always did feel more at peace with nature. Still as he sat there breathing it in a familiar scent hit his nostrils. Even if he hadn't been running sensory while here....due to not knowing if that was allowed here....his senses would still pick up almost everything. He would blink before sitting up as he sniffed again to be sure. After all there were a great deal of scents here. However this one stood out. It smelled of smelted metal and the forest all at the same time. One he had grown to know over the last year or so. Not often mind but once someone tries to put you in the hospital and then visits your home as a guest you tend to remember them. His hazel eyes shifted to the corner of a nearby building just before Ashitaka came sauntering around it on his mount. An impressive beast but at the same time he had to raise his hand to halt his wolves as they started to get up excited. They followed him but they were hunters after all. Giving him a whine they would settle back to laying down before Tengoku would rise to his feet and adjust his robes. A warm smile on his face.

Ashitaka like himself had also been a child raised in the wilds he believed. Aside from his academy days and the orphanage before then....he had spent years in the mountain with his sister. Either of them would likely survive in the wilds indefinitely if they needed to. They may even seem out of place here in such advanced city skylines. Perhaps that was why he trusted him despite the way they met. That and the masterful sword on his hip was the work of the young man. Once Ashitaka let go of the reigns as was wise Tengoku would walk forward and meet him halfway. Ashitaka with his elk and the grace of the forest. Tengoku with his wolf pack for the pride of the forest. One might assume two dieties of the forest had come to speak to each other. Still when Ashitaka would bow Tengoku would match it as an equal. Though Ashitaka was more powerful. Their ranks were the same.

"It has been some time Ashitaka san. It is good to see you in good health."

Tengoku didn't usually use honorifics but if Ashitaka had he would as well to not insult him. Of course the good health part didn't really comment on the kids mental health which seemed to fluctuate. Tengoku figured it was rude to inquire about it so he paid it no mind. Instead Tengoku would blink when the young man brought up the wakizashi and smile a little embarrassed as the young man bowed deeply in apology. Forgetting mannerisms for social visits like this Tengoku would step forward and place a hand on Ashitakas shoulder before speaking to him in a fairly warm tone.

"You need never lower your head so much before me Ashitaka. You and I are equals and if something has taken up your time it is up to me to understand as much. I will appreciate your craft when it comes to me. So raise your head and speak with me plainly please. I am here on a brief vacation after all. Oh speaking of. What brings you here?"
_________________
Character Name: Shinku Tengoku
Spendable Experience: 155
Total Experience: 3,655
Renown: 0
Ryo: 1,855,000