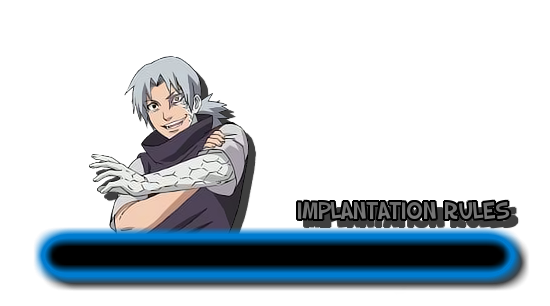 Stat Modifiers
Restrictions
The ninja world is rife with individuals possessing prized genetic material used for the performance of rare and highly coveted jutsu. This genetic material may be implanted into others in the hopes of increasing their combat abilities and thereby adding to their village or organization's strength. Implantation of Kekkei Genkai and Doujutsu can only occur with enough viable genetic material (i.e. an organ/cells for certain KKG or eyes for Doujutsu). Once you possess the enough genetic material then you may have it implanted into your own body via surgery to gain the abilities associated with that bloodline limit. Naturally, only those possessing the Ijutsu skill are capable of performing such a difficult and dangerous procedure. The benefits to implantation are obvious and undeniable as it may allow the user to coopt the power of others; however, with any reward there is risk. A unsuccessful transplant surgery can result in severe illness and even death if the patient is particularly unlucky. The odds are calculated with a simple dice roll (1-100) with the possibilities as follows:

1-2: Something has inexplicably gone horribly wrong and the patient has died.
3-10: The organ is not compatible with the body and has been rejected. The patient has survived, but will need to spend 3 weeks in real time in the hospital, recovering. The organ is no longer usable.
11-25: The organ was rejected, but was successfully preserved. The patient will need to spend 3 weeks in real time recovering in the hospital.
26-40: The organ was accepted, but is clashing with the user's previous bloodline. A choice must be made: either keep the new bloodline, but use its techniques at an extra rank of chakra and lose the previous bloodline, or keep the old bloodline and lose the new. The implanted organ cannot be saved, in either case. The patient will need to spend 3 week in real time in the hospital.
41-55: While the surgery has successfully blended the patient's body with the new organ, it is not perfect. The new organ is permanently active and any techniques used from its bloodline cost an additional rank in chakra. The patient will need to spend 2 weeks in real time in the hospital to recover.
56-75: A true success by any standard, the surgery has afforded a new bloodline with near perfect blending with the patient, allowing it to be used at no additional cost, but it still remains permanently active. The patient's body takes some time to adjust, both in recovery and training. 2 weeks in the hospital are required before the patient can learn to use the new ability, which will take no less than 2000 words.
76-98: Either the surgeon was extremely skilled and the patient's body particularly geared towards accepting implants, or a miracle of medicine has occurred. The patient's body blends surprisingly well with the new organ and accepts it as a new, long lost part of it. The new bloodline may be activated and deactivated at will, and no longer costs any extra chakra to use.
99-100: An actual, legitimate miracle, the surgery has succeeded far above expectations. The body is one with the organ and the patient may use its bloodline as though it were the patient's own. Flawless integration, the dream of any surgeon.

Rules/Notes:
1. Losing a bloodline through this process will not exclude the patient from the negative modifiers towards implants that the bloodline would normally give. (Losing your Storm Release in gaining a Sharingan will still have any future surgery counting both elements for a -65 modifier).
2.Permanently active implanted organs will passively drain the patient of 3 Stamina Points in chakra per post unless it is properly contained. This varies by organ, but most commonly, it is a Dojutsu that merely needs to be kept covered. This is the same as only possessing one eye, which comes with its own flaw. An organ can drain more than 3 Points if the bloodline itself has a higher cost for being active, but it cannot be lower.
3. Losing one's organ, be it for transplant or black market harvesting, will force a Flaw upon the character that must be registered and approved in that character's updates. These Flaws vary in function and severity based upon the character and the organ lost and can be inconvenient or detrimental. Flaws will be mechanically harmful and include penalties such as: Passive -1 Tier to a stat, +1 Rank in Cost to a major fighting skill, and -1 Rank in Power to a major fighting skill [for boosters this lowers the amount you can boost]. They are designed to be burdensome.
4. Senju are the exception in transplant surgery in that those cells will actively work to keep the patient alive and well, disfiguring the body and erasing all previous bloodlines in the process, but allowing access to Wood Release in so doing. It will cost an additional 2 ranks to use and will literally turn the person into a tree with the patient's face embedded into the trunk whenever they reach 10% or less Stamina, but at least they survive. No other benefits of a Senju implant will occur in this case, however, and no further implants have any chance of succeeding. This can be activated to overwrite any consequence.
5. Implanted organs with stages will begin at the stage that it was when harvested from the original owner. A new recipient can progress and change the stages (if such is possible for the bloodline) only if that recipient is capable of activating or deactivating it. The only exception to this rule is the Mangekyo Sharingan, which cannot be made Eternal outside of an Uchiha, but can be unlocked and switched between in a recipient, even if they cannot deactivate it.
6. Implanting an organ from a donor that the patient's body is already adapted to will always have the exact same consequence as the original. Such a procedure cannot have a negative effect upon the original organ's bloodline.
7. A Dojutsu that is subjected to the bloodline wipe will simply be rendered blind to the patient's optic nerve, useless until it is transplanted into a more suitable body.
8. Possessing the Senju bloodline prior to surgery will increase the consequence level by one. For example, if you get anywhere from 26-40 with the Senju bloodline your outcome will be from the 41-55 range.
9. Additional costs to an S-Rank technique adds another 10 Stamina Points for every extra rank.
10. Organs are required for implants (with the sole exception being Senju DNA where blood or any sizable amount of flesh matter is sufficient for implantation).
11. Senju Blood can only yield a single implant. If someone tries to draw enough blood for a second one, the Senju’s blood cells saturates the sample with antibodies thereby making it unusable.
12. Those who possess a Dual KKG have an easier time getting implants. All negative modifiers for additional implants are lowered by 15 thereby increasing the likelihood of an successful implant.
13. When you lose an organ, you must get your specific organ back in order to remove the flaw. If your organ is lost or removed you take the flaw unless you can prove it was simply destroyed in which case you don't have to take the flaw. In updates when people claim their implants they must note who it came from.
King of Games 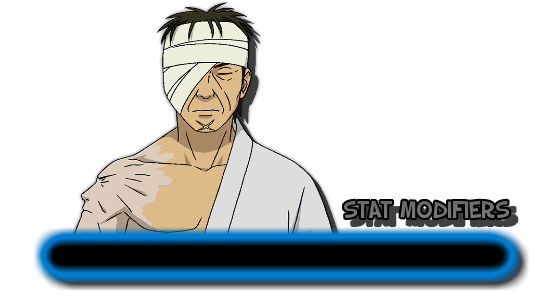 There are some modifiers that can enhance or diminish the risk of failure. The patient's Constitution and the surgeon's Intelligence play critical roles in the probability of success or failure. The higher one's Intelligence is the more likely they are to succeed. Additionally, the higher one's Constitution is the more likely they are to survive the procedure. The value of the initial roll is increased or decreased depending on the Intelligence of the surgeon and the Constitution of the patient. Note that only base values are considered for the purpose of the surgery. Stat increases via technique or SA are not counted towards the modifier chart. The modifiers are applied in the following order:

When surgeries are performed in a hospital setting the chance of success increases: +10

For every Bloodline that the patient possess the chance of failure increases:


For every attending physician (those possessing the Ijutsu skill) the chance of success increases: +10 per physician. Maximum of two assisting physicians (too many cooks spoil the broth).
King of Games 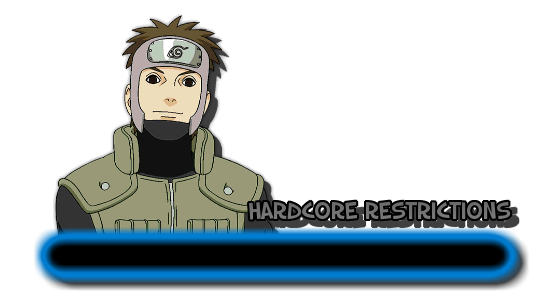 HARDCORE RESTRICTIONS
- Techniques may NOT increase the chance of success.
- Unique Abilities may NOT increase the chance of success.
- Clones may NOT be used to increase the chance of success.
- Genetic Material must be harvested/preserved within 1 week In Real Time of the donor's death.
-Generic Material must come from a player character.  NPC can not be harvested for organs
- Implanting an advanced element does NOT grant constituent elements that make up the advanced element. It only grants the advanced element itself.
- Those receiving an non-Doujutsu implant must pay the necessary experience requirements to achieve advancement in the bloodline as normal although this may be done with pre-existing experience. If it is a Doujutsu based implant then the recipient starts with whatever stage was unlocked by the donor.
-It is not possible to have more than 5 KKG
- A corpse can yield up several implantable organs: the brain, heart, 2 kidneys, 2 eyes, liver and lungs.
- Senju DNA requires 2 Liters of Blood (basically enough to make you pass out and stay in the hospital for awhile). You must still take a flaw.
- In order to get an implant, the person whose organ you are taking must have actually unlocked their KKG (meaning they must have paid the necessary experience to unlock at least the lowest level).
-Taking organs from Dual KKG or Chimera allows you to CHOOSE 1 KKG per implantation process. For example, you can take the heart which will be considered 1 implant and will contain the KKG of your choice. And then you can go for the lungs which will be considered another implant and will contain the KKG of your choice.
-If a Dojutsu user loses their eyes they lose all derived KKG abilities unless the bloodline provides otherwise. Dojutsu individuals still have to take the flaw BUT since they lost their eyes (and thus their bloodline) they don't get a negative modifier for future implants
Current date/time is Sat Jan 23, 2021 5:14 am