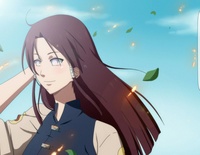 
Mighty Fist:  User may increase the Power of Taijutsu by 1 Rank, but increases the costs by 1 Rank higher as well.


Learners UA: Can learn jutsu 1 rank higher than what class allows (stacks with others), but increases Rank up by 10%.

Appearance:
The first daughter and heir of the Hyuuga family, she can usually be found wearing a khaki tee with the Hyuuga flame on the left sleeve, a flack vest, and short black shorts, thigh length black socks, and combat boots.

The bangs are tied in white wrap, and while normally wears the rest of her hair down, when on missions ties it into a ponytail.

Around her neck is the Nekoian Headband, polished to a fine sheen, and around her head, a set of ornate decorative Yokai Horns made out of steel with bronze engravings.

Iwai is complicated. She’s a borderline sociopath, can understand you, where you’re coming from, and even why you’d do what you do. But that doesn’t guarantee she’ll care about your life or safety. While she is compassionate, and full of mirth, it’s usually gained from what she does to others, or things she sees happening to others that makes her life feel worthwhile.

Iwai, isn’t exactly emotionally stable though by any means. She has less a Berserk Button, as much as a Berserk Switchboard, and will fly off the handle at a moments notice, but after a truly powerful blast of rage, and the object of her anger / annoyance / general discomfort, has been dealt with, she goes back to her old emotions as if nothing ever happened.

A Rebellious teen, she embraces the challenge of breaking traditions, purely to enjoy the world in it’s glory before she has to marry a Hyuuga male. It’s not the Hyuuga part that bothers her, but rather the male part.

She’d rather enjoy sipping the nectar of many rare flowers, of seeing the wonders and the sites the world has to offer before being bogged down as Matriarch.

Iwai was the first born  of the Main Branch, and as such she was groomed to be heir. She grew up with the finest of luxuries, stories of great traditions, and best of all, a fighting style that was the most dangerous of all.

It was their tales of conquest, and adventure that captured her young heart growing up. She would pretend going on grand adventures herself, and conquering foreign lands like the heroes in her books. As she got older though, time for fun died, and time for growing up as a ninja took over. Where she dreaded the day she’d have to choose a mate, something she as Matriarch would have to choose eventually.

So instead of dealing with having to choose a male as tradition stated, she plotted and planned to leave everything behind for one last burst of adventure while trying to figure out how to get out of the tradition of marrying a gender she had no interest with. If she was going to marry it’d be out of love.

Not out of tradition. Thankfully the chaos caused by Neko-Sama was just what she needed to set her plans in motion.