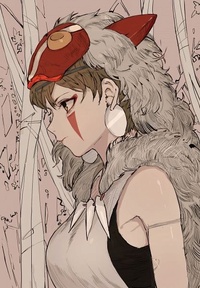 “Would I have known?” Mineko questioned under her breath to particularly no one. “No, I wouldn’t.” She answered herself briefly. She continued covering herself with makeshift bandages with the usage of long leaves and braided string.
Indigo somberly laid down, on a dank rock, before her and grunted as his response, either from his annoyance towards her or his agitation from the leeches that caught him.
“You can just shut up, Indigo.” She snapped then sighed audibly out of frustration.
It was rare for the pair to be infuriated towards each other. They have resolved most fights through communication and compromise but if it is about a subject that relates to Mineko’s fragile pride resulting in idiocy and winning stupid prizes, it shuts out Indigo completely, he tends to avoid conversing with her in this case. And Mineko is not oblivious to it. Inseparable years together, she has read him well and so has he to her.
‘Again, I didn’t fucking know.’ with furrowed brows she wanted to scream that to him to bring some clarity in her mind but that would only deepen her frustration further, she knows it to be true. She continued to aid herself but this time with tougher exaggerated movements than what was needed and kept splashing the itch on her wounded legs with water, by the pond.
The leaches marked their bites into Mineko and Indigo’s limbs well. Blood still oozed out some of their bitten marks, it made Indigo slowly weary.
‘I shouldn’t have done that. I know now.’ she also wanted to plead out. The longer Indigo kept his silence, the more she became frustrated; felt as though she was on the brink of falling into insanity, but, in reality, she was on the verge of tears. Yet she has also kept her vigilance and suppressed her frustration within her. No nice words would fix their current situation, or so she thought. She shifted her focus into something else, looking into the distance, away from Indigo.
Mineko and Indigo glanced their eyes every now and then to see if the other one is looking at them. Mineko massaged her legs and Indigo licked his wounds. After moments, Mineko finally gained the courage to break the silence, she swallowed her spit and cleared her throat yet her brows still arched than usual.
“Indigo,“ —He lifted his head and looked up to her spontaneously— “I am—“

A loud growl from the other side of the wood halted her words. Flock of birds collectively flew away from its noise. She looked at Indigo and their eyes met with the same shock almost terrified expressions on their faces. Another growl called out, louder than its last. They turn their head to it’s direction. A bear, probably. From its volume, it must have been considerably close to where they were.  Both of them were readying themselves stand up from their places until they heard another cry but this time…

“Help!”, by the sound of it, a young woman wailed out into the distance, almost matching with the bear’s volume. Indigo abruptly stood up and barked at its direction.
“Indigo…” with a finger raised, she gave him a warning look. He looked back to Mineko, enraged. With his fangs out, he gritted his teeth. “I am tired!” She contorted “Look at us. Badly hurt. And you want to be a hero right now?” She yelled to him with her voice conceding in disbelief and frustration.
He gave her one last bark before he leaped out of the rock, disregarding his hurt body, and ran towards where the sound came from.
“Indigo!” She yelled, left her panting for her breath and out of anger.

“What is it about?” the child laid the palm of her free hand on top of the book, which was nearly as large as her head, that rested on her father’s lap. She tiptoed her feet to take a glance at the book’s cover, her father moved his hand away on top of it for her to see. He sat upright propped onto their bed. “It’s about a girl…” he said so soothingly
“Like me!” She interrupted cheerfully. Her head held upward to gaze at the man’s face then hugging tightly her stuffed animal that could have resembled a dog or a bunny depicting from its long ears and short tail. Showing hints of excitement in her forming smile. She could not see him but she knew for sure he was smiling back. The hazy scene fogged the man’s body to the neck up like a mist, like clouds enveloping mountain peaks. But the atmosphere radiated a comforting warmth within her than what any mountain peak could offer. “Yes. A girl like you.” He said “ went through a tunnel. Along with her family. And they found themselves in an unknown place…”

“Indigo!” Mineko yelled with her mouth as wide as ever as she bustled through leaves and branches to find her partner. She panted as she pushed through, her feet were soaking wet and tired but she won’t let herself easily give into exhaustion. She continued to channel her chakra, coming from her feet flowing steadily through her to reach her nose, to track him down.
If Mineko were to describe him, she would have painted his whole being with words such as capable, courageous, and all the other words alike but it seemed whenever she’d find him in a deleterious state in her mind, she completely forget all his traits. She’d see all the opposite; fragile Indgo in distress, begging for someone to ease his dependency. “I’m coming, Indigo,” she muttered under her breath.
She traced Indigo’s distinguishable scent. Moved her way up to the trees, leaping on all fours, wood to wood faster than what her only hurt legs could take her at the moment.

“Do they ever get out?” The young girl asked with a concerned tone. “Yes…” Her father paused to check his reaction. Her face glimmered with delight and her eyes gave an emotion that piqued in interest. “But…” Her father paused again to check. She raised her brows in suspense. “She had to get back her family first.” He finally finished. “Why?” She slightly tilted her head.

Mineko finally spotted where the sound came from and surely Indigo was closeby. In an empty lot of grass that was guarded with trees, in concealment above, Mineko saw before her the bear on all fours facing the young boy dropped down onto the ground, trying not to make any sudden movements. A bear would not have contempt for you unless you have done something to deserve it. When you have lived long enough into the wood, you would have known that.
The bear slobbered his spit as he gritted his teeth, looking ferocious towards the boy.
At the peripheral of the scene, there was Indigo to which Mineko quickly caught her eye. Looking at  the bear facing the trembling child then back to Indigo, a shiver went up to her spine. ‘Indigo! Are you a fool?’ She wanted to cry out to him. A few beads of sweat rolled from her forehead, her heart heavily galloping from Indigo’s actions. It was difficult to hatch a strategy of not being noticed as to get him whilst thinking of many ways to murder him as punishment for  bringing them into this situation.