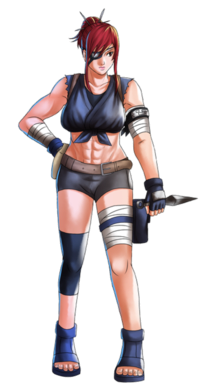 Shunko walked to the village gates wearing her compress suit , and upon seeing the guard that had met her when she arrived not even a month ago, gave a hearty wave. Today was going to be a fun one she felt, Niko had told her about a person she called Andy, the name ringing a few bells, but not enough to really jog her memory other than she wasn't the only one to pass the Academy in record time. There was one other one, and so she with Niko's help found a nice, somewhat easy mission that would play to her strengths. But would keep them out of danger as long as they weren't foolish or reckless.

So she stood there waiting for her peer, and hoped his arrival would jog the rest of her memory.

It was another early morning in the country of lightning, and Andalusa was wide awake and moving toward the gates of the village. The sun was just coming over the mountains, the sky a painted masterpiece of pink and purple, the orange ball of fire, which would over the course of the next couple of hours, turn into a bright yellow, slowly making its ascent into the heavens. Andy was dressed in his usual attire, a fine black suit, a black undershirt beneath, black slacks and black dress shoes that were modified for more..active use. Over his black attire he wore a fine red overcoat with a yellow, almost golden coloured, scarf hanging down from his collar. His long black hair wasn’t adorned in any particular fashion, nor tied back within a ponytail. It simply hung down to the small of his back in a stark black mass. Within his hand he flicked a pen between his fingers idly as he walked. On most days he’d be smoking a cigar, however he detested doing such on missions and so he didn’t bring any with him. His hands however still needed something to occupy them so he idly used a pen to amuse himself.

His hazel eyes would be on the road before him as he mused about the name of his partner. Shunko, if he recalled. He remembered her from the academy, of course he never forgot anything. She had been a student that breezed through the academy within a couple of short weeks. He himself took the long route, taking the time to truly hone his mind over the years to make it akin to a sharpened edge in it of itself. However that didn’t mean he resented his fellow shinobi or looked down upon her. They both simply had their own ways of doing things.

It was now that he would find himself approaching the gates, the guard giving him a small nod as he approached and the black haired genin found himself face to face with his mission partner. As always, his manners would be impeccable, and he’d slide the pen into his sleeve in a single fluid motion as he brought the same hand across his body, in front of his stomach, the fingers pointed out as he bowed over the arm in an exquisite gesture of greeting. “Good morning Miss Shunko, it has been awhile, I trust you’ve been well?” He would say, his voice coming out calm and clear as he rose once more, immediately making eye contact. It would be rude to look elsewhere unless they were busy, and they simply weren’t.
_________________
Character Name: Tamwyn
Spendable Experience: 690
Total Experience: 3,970
Renown: 950
Ryo: 150,000
Stats: