Clouds of the Sky Immediately, Lëî jumped in air twice to catch his drift in descent, utilizing his speed as leverage, hasting his way towards the peak whilst charging chakra within his palm, streaming it forth from his well. He watched the wake of his previous chakra enhanced strength force the water towards the walls of the field, in his ascent. After he gained enough height, the weight of his body allowed him to fall again, his palm filled with chakra for another strike with the Chakra Enhnced Strength technique. The wake of the water, began washing in again in motion of his first strike. Upon falling towards the flooded area, the washing wave streamed into the epicenter, in which he met with a jutting palm with the Chakra enhanced strength, obliterating and orally evaporating the flooded water within the area.
_________________

After the water had fully evaporated by the sheer strength of his chkra enhanced strike, Lëî sat in the middle of the restricted training field and began meditating. He breathed deeply inwards and closed his eyes, imagining lights within the darkness of his mind, exhaling in staring at thier essence. His breath met in synchopation with his heart, listening to the beat of it's drum, and the music of the heavenly spheres play within his mind with the steady beat of it's cardiac music. It was all so aligned and thus he saught to relax and recover his chakra while sitting.
_________________

There was nothing more avail, I practice all the techniques I possibly could. I had the Medusazoan contract of which was passed down within my Îńäzümån lineage, however had not taken the time to introduce myself to them yet. Many days I had dreams of seeping in an enlightened basin, the water clear as day with all forms of jelly fish around me swimming. The sea was akin the sky, with clouds underneathe the water, lotuses underneathe my feet as I swam swiftly. There were a multitude of jelly fish, yet none I could identify. I believed it was my next task to discover and awakened my contract deeply, so that I could know the deepest reaches of my animalistic side.
_________________

With my ability over lightning, I felt quite prestigious. I had created for the clan a signiture for myself, the Lightning Bolt technique, and saught to consult the oracles and priest to advance the clan into Medical Sciences, trough chemistry and spirituality, our aetheric based techniques. I believed it was time to devout myself wholeheartfully in the enrichment of my clan, to supplement them and grow there their Reknown throughout, to beckon for our stronghold and build a sanctum. We needed a larger fort, outpost in multiple villages and allies across the nation. I took note to self that I'd habe to brush up on my fuuinjutsu skills. My literacy was always ascended and enlightening, birthing forth sigils and seals for happiness and longevity. I always saught fuuinjutsu as my diplomatic exchange for utility, whether ascenting with comrades our sealing techniques on the field.
_________________

Lastly, I felt the need to rise above Tokubetzu. I adored the pastries, ornaments, and the flashy growth, for it brought me stardom, however I felt the need to be birthed into real talent. My gifts felt lackluster and I saught creative refurbishing. I needed to advance the Inazuman's techniques and become a celestant in healing. My Regalia was always trembling as if it needed notes to be played and pipette to be filled. How would I ever become the chimney of the stroud with out adequate herbs to mix and refill? It just couldn't happened with me sitting around. I needed to grow, and I felt this time was the perfect opportunity to do so. For my conjurings, my practical arcana, the healing, provisions, and pamplets. I just had to make the magick manifest.

With knowing what I needed to know, I partook in learning one last technique. I streamed Raiton within thine body, streaming it forth from my well and sending it in my tenketsu. My tenketsu innately opened and graced the chakra through the doors of my arms and palms as indigo lightning energy. The energy cackled and manifested instantly striking forth, without hesitation. I did so again, attempting to comprehend the implications if the technique. Hokding the chakra within palm while doing. In holding the chakra, I could openly channel a wave of lightning which would span before me iconically. I took off my echo resonance speakers and removed the chemistry station, placing then in a locker before I streamed and left.

聖 闪电颠簸 { 休克 } •°• Shèng Shǎndiànbó •°• Holy Lightning Jolt Technique
Rank: A
Power: A
Activation Cost: A •°• 15
Upkeep Cost: B •°• 10
Range: Personal - Close { 0hm -  36m }
Speed: A +1 Tier { S }
Element: 雷遁 : Räitōn : Style of Lightning
Skill: Ninjutsu
Classification: Offensive; Secret
Requirements: KKG Exclusive; Îñäzümån
Parent Technique: ~
Hand Seals: 野兔 •  绵羊 • 公鸡 | Yétü • Míanyäng • Gōngjï  | Hare • Sheep • Rooster
Description: The caster charges their natural sources from the center of their abdomen and further into their hands. After weaving the corresponding sigils the charge of the chakra within the hands will fizzle until the nature of lightning emanates from the palms. The lightning shall naturally coat over the hands, shining in a sporadic color of violet and deep indigo. The caster will point them at a target, releasing the cluster of lightning toward an adversary, bringing the sound of crackling thunder upon firing. This cluster of lightning energy jumps, iconically, from the caster's hands and clings towards it's extended target, latching the elemental nature upon and throughout their body. Upon contact, the technique shocks the opponent, as the name implies, sending an electrifying jolt of energy throughout their body, applying the 'shock' status effect. Due to the electrical composition, lightning current and exertion of the shock, similar to fire, exposure to such status damages the adversary with 2nd degree burns over their body. If the adversary has a chaotic or evil allignment, the Holy Lightning Jolt technique advances in a rank of power and they are stunned instead. The speed of this technique naturally increases by one tier in regard of casting. 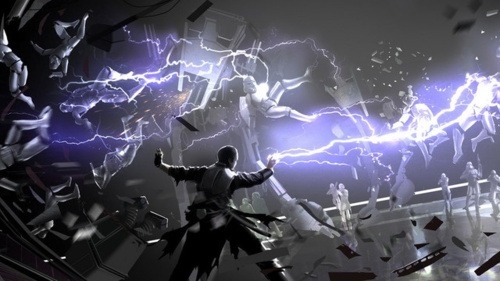 'Shock' Status Effect:
If the constitution of the adversary is below that of B, the shock spikes throughout the adversary's nervous system, shortening out there synaptic receptors, causing involuntary movement and spasming pains, stunning them. Previously shocked enemies have thier 'shock' status and are stunned for a turn at Rank B of the stacking 'shock' status effect; cannot move. Afterwards, the emananting duration of both shock and stun can be elongated by the application of upkeep, with the exception of stuns which has been applied at less than S rank. After the release of the shock status effect, This technique inhibits the movement of the adversary, hampering their speed by a minor disadvantage { ± } and coordination with a major disadvantage { ±± } for two turns. If the shock of the technique is two tiers above the constituition of the adversary, thier nervous system becomes fried, upon overload, thus permentally paralyzed.