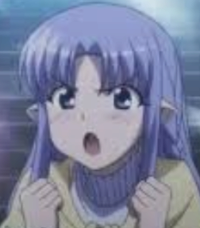 History: To know who Yuki Yuki is, one must first know her family. The very first Yuki was a man who's name has been lost to legend. This man could wield ice as if he was born from it. Dark hair, dark eyes, dark countenance, he was a brave and fierce warrior who's might was unparalleled. His children, Genosuke Yuki and Monosuke Yuki, were exactly the same. Genosuke, the first born, inherited the family. He married a frail woman by the name of Yuki Gintama. In marriage, her name was Yuki Yuki. They both thought this was a very clever name, and thus named their daughter Yuki as well. This girl inherited her mother's looks- blue hair, kind eyes. She was no warrior. Her brother took after their father, and was a powerful warrior as well. She went on to lead the Yuki clan as the Heaven to her brother's mighty Earth. Together, they made up the Yin Yang of the Yuki.

Generations have passed, sometimes with only a male heir, and sometimes with only a female heir. Still, whenever there were two, they were always a pair deal. Yuki Yuki and her invincible brother. Some say the spirits of the twins themselves was passed down, reincarnated into each generation. Most believe that was hogwash. Finally, the last Yuki Yuki married the shinobi named Tenka Yuki, her distant cousin. By now it was tradition for the strongest male Yuki to marry the current Yuki Yuki and lead the clan side by side. They gave birth to the newest Yuki Yuki and her twin brother Byakusetsu Yuki. The two were inseparable. They did everything they could together.

When they were 14, there was an attempted culling of the Yuki clan by insurgents. Tenka Yuki stood alone and defended his clan from the overwhelming firepower of their aggressors. The mother, Yuki Yuki remained behind her husband, watching him fight against the destruction of their home. The invaders had set fire to the manor, and as their clansmen tried to escape, the young Yuki Yuki watched as her father protected them all.

"Sky Flower Falling Down, Staining the Ice Red With Blood, The Sakura Blooms Last." That was the epitaph they gave her father, the hero of the clan. He, who sacrificed his own chakra and life for those he loved. The man died with a smile on his face, knowing he did everything he could. His last words were, "My life for my Daughter- The Storm of Ice will never end!" as he released a suicide jutsu. His wife embraced the jutsu with him, donating all of her own pitiful life force to see it through. A storm of ice unseen since the legends before shinobi history was released around them. The vast majority of the invading forces were obliterated, though not before killing her brother. Yuki Yuki could only watch as everyone she loved died.

The rest of the clan had survived, though. They built a memorial at the burned and frozen ruins of the once beautiful manor. It was a statue of her father and mother, and engraved on it was her father's epitaph. Below that read "Here was the last stand of Tenka and Yuki Yuki, hereos of the Yuki Clan, and their son, Byakusetsu Yuki, who perished in the fighting." Below that were another long list of names of those brave clansmen who died that night.

Yuki Yuki was destroyed by this. She withdrew into herself, only speaking when absolutely necessary. She threw herself into her training, desperate to become strong enough to protect her clan herself, now that tradition had been broken with the death of her brother. She rejected the frailty of her namesake, and pushed on to eventually become a gennin  within three years. She will not fail.

Personality: Yuki is a very quiet girl these days. She's solemn when alone, and only speaks when absolutely necessary. Still, even though she doesn't talk much at all, she can't help but express her emotions in other ways. Because she didn't start ninja training until way later in life, she can't hide how she feels. Her eyes, body language, everything shows her feelings, and she has a lot to show. Around others, she lets go of the past and can't help but react to the now. Alone, and she's melancholy.

She likes girly things like teddy bears and dolls, and frilly lacy clothes when she's not admiring battle armor. She thinks weapons are really cool, and has a lot of respect for armor of all kinds.
_________________

Update: Original 5 jutsu, though there's only 4 I can possibly learn because E-rank can only learn D-ranks alone.

Info: Name: Manipulated Shuriken Technique
Rank: D
Power: D
Activation Cost: -
Upkeep Cost: 1
Range: 0 - 100 m.
Speed: -
Element: -
Skill: Bukijutsu
Classification: N/A
Requirements: N/A
Parent Technique: N/A
Hand Seals: -
Description: With this technique a translucent string, both elastic and highly durable, is attached to a shuriken, making it possible to alter its path after having thrown it. An expert will have the ability to freely glide the shuriken in any direction with just a single movement of their fingertip. The first attack, challenging the enemy, is avoided and after a time-lag of several seconds, it will come from behind. Depending on the performance, the possible tactics can be infinite.


Name: Hiding in Mist Technique
Rank: D
Cost: 3
Range: 125 m.
Speed: C (only applicable when expelled)
Element: Water
Skill: Ninjutsu
Classification: Village Specific (Kiri)
Requirement: N/A
Parent Technique: N/A
Handseals: Seal of Confrontation
Description: The user conjures a thick, white mist which reduces visibility to absolute zero. This can be achieved by using a water source such as a lake, reservoir, or being in a damp environment. If no sources are present the user can still produce a mist by expelling it from their mouth.
Drawbacks: Just like real life fog the mist can only exist in conditions where it can survive. Very hot, arid climates forces the mist to evaporate (clearing up over two rotations.) In addition the mist can be cleared by strong winds or sudden bursts.


Name: Wind Release: Passing Typhoon
Rank: D
Activation Cost: 3
Range: 0 - 100 m.
Speed: C+
Element: Wind
Skill: Ninjutsu
Classification: N/A
Requirements: N/A
Parent Technique: N/A
Hand Seals: N/A
Description: The user creates a gust of wind in a radius around them that blows away all weather conditions. It is powerful enough to dispel even the Hiding in Mist Technique and can even be used to deflect small projectiles.
Weaknesses: The lack of concentration and speed makes this a poor offensive technique.
_________________

-Characters earn 10 Experience Points per post in a topic containing multiple players. Going through life with others affords a peak at a different viewpoint in life, enhancing everyone's personal growth and development.

-An additional 5 Experience Points are earned per post when training with or on a mission with the character's designated teacher or sensei.

-An additional 5 Experience Points can also be earned when training within a village's designated training grounds.