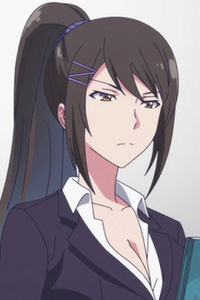 There was no simple way of putting it. When it came to creative names, Ayano lacked the enthusiasm or humor to create anything witty. Sometimes the most basic options were the best. Early morning at dawn the young woman was already dressed sharply for this occasion. Ayano is a remarkably average looking woman enough to be considered cute, though not much more. Standing roughly 5'5 and weighing 130 lbs she has a larger-than-average bust but not outstanding or absolutely demanding respect. Her fair skin is kept in rather pristine condition being smooth and moisturized daily with no visible tattoos, birthmarks, or scars on her body. Her natural charcoal gray eyes and hair gives her representation about her personality, which is the lack therefore of.

She wears black dress shoes, a dark gray short skirt and dress top with long sleeves with a lapel on either side revealing a white undershirt. A small black bow is worn just below the collar of the undershirt. She has long dark gray hair which is typically curled towards the ends and two strands down both sides just far enough to rest on her bust. Her hair reaches down to mid-lower back level. This is topped with a single black headband worn keeping everything together. In her arms she held a binder which contained her plan to take off her business. Leaving her house she would head straight to the new building in the Earth District. It was one of the man structures among the Earth District, going a ground-level establishment. The new paint and architecture made it stand out among the rest. 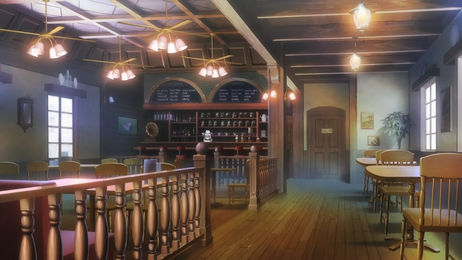 The building was made of wood just like the others. It was painted white with teak molding on the exterior, and a green roof. With plenty of windows it provided the interior with natural lighting. The inside of the cafe was a single large room, its interior parts separated by short wooden railing. Upon entering to the right extending to the wall were a series of single tables accompanied by two chairs. This was an express lane of sorts, being for those needing a quick bite on their lunch breaks or with busy schedules. Inside the railing to the left was the bulk of the cafe being many large tables and even booths against the wall. At the far end was the bar. The hardwood of choice was teak giving the interior, along with its paint and lighting, a bright atmosphere. The menu was posted above the bar on a black chalk board. Ayano figured the bold, white text reflected against the black canvas helped patrons have full view wherever they stood or sat. Laminated menus will also to be provided.

Entering the established building there were a small staff of employees wearing similar, matching uniforms. It was more or less of a dress code Ayano enforced upon her staff. They worked willingly to prepare the place for business as they cleaned, prepared menus, and worked the cooking equipment in the back. Ayano would greet her staff members and ensure the business was about to open. As she did this, Ayano disappeared into the back where she sat at her own desk in her office, opening her binder and started situating herself. The establishment was now open for business...

Re: Menu and Description

Upon opening, all items purchased will receive a 20% reduction to their cost for the next month!
Current date/time is Fri Dec 04, 2020 3:06 pm