Here comes Santa on his way 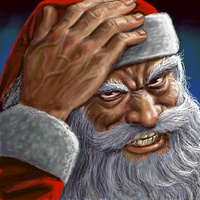 Here comes Santa on his way

Somewhere outside the normal bounds of time and space an ancient entity stirred. Something that looked like it was human but was anything but awoke for the first time in decades or perhaps even centuries.  With tasseled hair as white as snow and a fluffy beard to match he looked like he was an old man, or at least that was how his current incantation appeared.

“Ho, I wonder just how long it has been since I was last called upon.” he said with a jolly laugh as he stop up from his gilded throne causing heavy winter clothes to materialize around body.  He had to admit the bright red coloring with white trims was much more festival then his usual attire. Perhaps for once he had been summoned to bring some joy to the world.

Glancing at a holographic display of a globe that represented the earth he sighed as his mind was quickly brought up to date with the events that had transpired since the last time he had arisen and of the near future that was to come.  A plague of illness was already sweeping across the land sending many into a coma followed by death. Beyond that a brewing storm that could make even an epidemic seem pleasant in it’s toll.  As usual he had been called upon to help prevent destruction on a mass scale, but only if the humans could prove themselves worthy of such salvation.

“They failed to watch out, and could drown in cries. But all is not lost because I’m telling you why. Santa Claus is coming, he’s coming to town.” sang the man to himself as he evaporated into millions of small particles of light that would descend upon the five major ninja villages to deliver upon them a gift. It didn’t matter if they had been naughty or nice, all would receive a visit from him on this day.