Welcome home. Here, have some troubles.

Welcome home. Here, have some troubles. 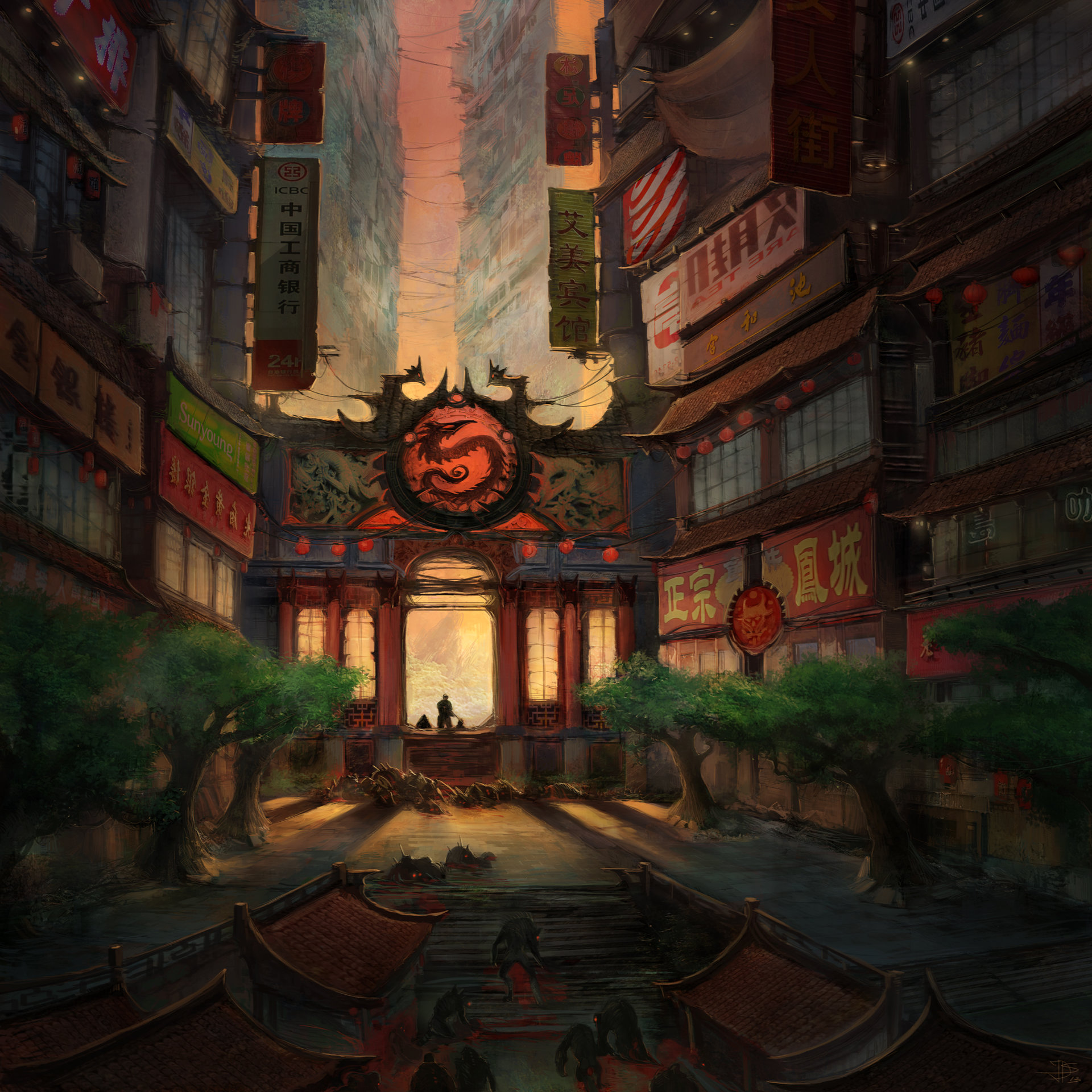 This was new. The Yokai's District had started construction works. Huh. Did that old man finally decide to do something now that his time as leader was nearing its end? How long had he enjoyed the luxuries of his position without watching over its pride? Years? Decades? Hua Li couldn't say. What she did know was that he finally, after having it suggested two years ago, had decided to build that damned wall. And what's the first thing the Daitengu noticed? Troubles. A giant fancy gate in the middle of the road now marked the entry to the district. Finally telling everyone they'd have to beware the oni. Telling them where the world of humans ended to make room for that of demons. A 'Kimon', a demon gate. Superstitiously, it should have been build in the north-east. Ashtoreth, like most yokai, cared none for that silliness. But at least it had one thing right: it'd be where the demons entered and left the human's supposed home - Kumogakure.

She had not reached the gate itself when her eyes caught the corpses of a variety of dogs. Or, they looked like dogs. Robust, ugly dogs bearing the colours of shadow and despair. Eyes smouldering with inner fire. The tengu raised an eyebrow. What was going on here? She'd continue her casual pace, making sure not to step on the corpses as her gaze danced from one body to another, until she finally reached the gate. An oni would show up, looking down on her with a grimace. He'd not fail to notice the horns she bore, but even those beautiful horns didn't stop him from thinking it was his business to hold everyone out.


"What do you want?", he'd growl. "Can't you see there's trouble going on here?"
"The only trouble I'm seeing is an oni not knowing his place. What's the meaning of this mess here?"
"What's it to you? The oni got this."
"Really now?", she'd turn around to look at the dozen or so of corpses. "Is that what you're telling the humans too? Because I don't see this being covered."
"You better keep that sass to yourself, tengu."
"That's Daitengu to you, grunt. Now speak up before I hang you by your horns over this gate."
"Daitengu...? You're Hua Li?"
"Who else would I be? Do you know any other Daitengu perhaps?"
"No, but you're a tengu. You could be telling me nonsense."
"That's uncalled for. But I guess oni speak a different language, so let me show you..."


One kusarigama and five minutes later, the oni found himself on the edge of the gate, dangling at the grace of the yokai's strength. Kusarigama wrapped around his throat, his hands clung tightly to its chains as he looked down from this uncomfortable height.


"Does this make clear who I am, gate guard?"
"Y-yes. It certainly does. I simply wasn't informed, Daitengu."
"So you're telling me Ashtoreth's been failing to keep things organised now?"
"N-no, I me-"
"That's alright, I won't tell. You do your job, I'll do mine. And once we're back on the ground, I expect you to tell me what happened here."


Hua Li would take back her weapon, somehow forgetting she was supposed to hold the oni. A brief second later, an uncomfortable smack was heard as he hit the ground and groaned in displeasure. He'd be alright; the oni capable of bearing a good beating. Just a little sore all over the place the next day. Nothing the oni couldn't bend to his benefit; telling he had a scuffle with the Daitengu and lived through it was only good for his reputation amongst his kin. The details were not so important if no one asked about them anyway.


"Now, speak up. I don't have all day."
"Right. So, a small group of ours have been experimenting on animals. Looking into solid guard dogs. And uh... Yeah. They're doing a good job alright. I mean, the beasts are ferocious and all."
"Then why are you guarding the gates?"
"Because they're hardly tamed and out of control."
"Great...", she'd sigh in exasperation. "Not exactly the home-coming I imagined but I suppose it's better than boredom. Has anyone been contacted to clean up this mess?"
"I don't know. I was supposed to keep watch with a baku today. Never showed up. Probably soiled himself and went into hiding.", the oni said with a shrug.
"Of course. Just keep watching this gate while I go figure the rest out."

Arriving at Baku's scientific centres, a somewhat clandestine building considering it thrived not on official donations or clan funds, she was almost instantly greeted by a baku who had caught sight of the hound in her arms. He'd bow, not making any eye contact with his superior while doing so, before instantly speaking about the creature. One of their experiments, so it seemed, and glad to see at least one of them wasn't killed off. After a swift correction she had ended the lives of four others, he nodded in understanding. albeit with a clear expression of sadness at the loss of such valuable creatures. The truth was nonetheless shared quickly about the whole situation.

The baku scientists had started a debate on the evolution of animals and how humans had a long standing record of breeding all kinds of species to achieve the 'perfect breed'. Disregarding the differences in tastes that commonly came with human kind, they kept playing with the idea of trying something similar. Something that depended less on personal opinions and hinged more on  scientifically proven records. The idea to create their own breed - the sort which could endure an oni - was quickly formed, and as such early experiments towards the 'Hell Hound' had begun. It was an honest game, but as experiments resulted in a great success rather soon, the baku imagined even more possibilities. Their newest specimen was a robust kind. Sharp fangs, strong jaws and capable of greater endurance than most other dogs. Even untrained for combat, their dogs easily trumped those of humans. 'Project Inugami', as they had come to call it endearingly, had set the standard for the yokai pet dog. And formed the base from which they'd start future projects. Completely caught up in their own wild dreams, sights fixated on the potential, the Baku Institute had pushed aside the fact they were performing off the agenda of the clan leader.

Suddenly realising they were still in the open, the baku beckoned the daitengu inside the Institute to continue their conversation. Even after her remark that she should bring this up to the clan leader, the baku waved her comment away under the thought that the cat was already out of the bag anyway and that Ashtoreth would swoop down soon enough anyway. By now, Project Inugami was no longer a secret. It had caused unnecessary danger and the Institute would pay for it. It couldn't be prevented, and they were fully prepared to accept the consequences. Continuing under the philosophy that time could not be reversed, it was better to keep sights on the future. The dogs were out. Most were killed by now. The one Hua Li had brought back was one of the few remaining specimen. These few served the future.

Once inside, the baku continued his explanation upon request of the daitengu. What the future exactly meant. A continuation, of course. At the verge of a break-through such as this, there was no point in stopping. Even if Ashtoreth decided to intervene, the baku stated with a chuckle that it was 'too late'. The branch leader has taken precautions; the leader had been outplayed. And the baku took a quick assessment of Hua Li's reactions. The tengu's wry smile ever present as her cunning eyes observed every of his actions and reactions. Finding no sign that she was about to make a scene, he asked for a request.

"We discovered that the dogs didn't break out. They have been released by an individual. We succeeded in getting a vague description, but we still need to track the man down. Trouble is, the local yakuza in this district protects him and they are unwilling to cooperate. Perhaps someone of more... persuasive prowess could help us out? Say... Someone like you?"
"Consider it done. I'll clean this up, but remember you'll owe me for this."
"Agreed."

Knowing shinobi workings, it'd be her job to investigate this to the bottom anyway. So better to accept the request and gain an additional boon than to be difficult about it and lose the opportunity. That said, if her piece of information was to be retrieved from the Houses of organised crime, she'd be in for a challenge. The extraction of information of this calibre was bordering ANBU territory. Not exactly something she was shy about treading but the smith's skills in information extraction didn't measure up against these specialists. Too bad the identities of ANBU members wasn't something she had access to. With this district being her playground and responsibility, it'd be up to Hua Li to do what she could given her abilities.

And so, after a brief goodbye, her silhouette vanished from the Institute.

Which leads to this.