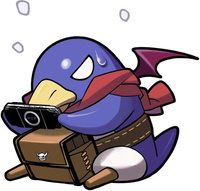 Power Play - Standard UA. The Doragon is capable of-for five rounds-increasing the tier of all taijutsu techniques by 1. This, accordingly, makes all non-taijutsu techniques used during this duration decrease in power by one tier. Cost 5 CP to activate.

And Further Beyond! - Standard UA. The genin is capable of tapping into hidden chakra reserves unknown to most people, at the cost of making her exhausted far quicker. She gains 25% more chakra when she has 30 or less CP, but suffers double the exhaustion. 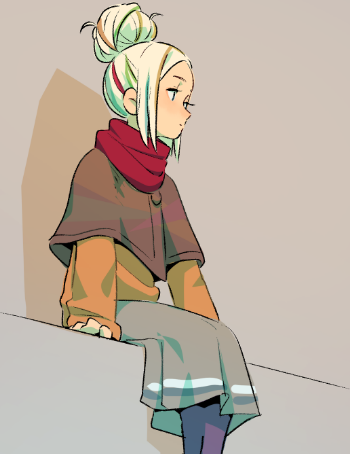 A fairly tall lady, 1.7 meters to be exact, with a striking yet not-so-seductive look to her. Has a face that's easy to forget. Has a very healthy weight, as most ninja would have considering their rather dangerous profession.

Notably, Doragon doesn't care much for Sunagakure heat, wearing rather heavy clothing for any habitat, much less a desert. Her attire has been described as very grandma-esque by most and it gives the impression that she’s far older than she really is. As a result, Doragon has taken to wearing a far more lean and appealing tracksuit that shows off her body much better than her usually humble outlook.

...Oh, I’m just kidding, it was a bit more complicated than that. And, like many a ninja’s backstory, her tale starts a bit before Doragon was even born.

These shinobi that we refer to as heroes, as champions of the village...

Spoiler:
Riku Masuchi was an honest, hard-working man; a person that you could seemingly always depend upon. People like this were not uncommon to see-at least, among the civilian population that Riku lived in. Shinobi...shinobi weren’t bad people at heart. At least, that’s what Riku liked to think. They protected the village, and put money into the bank. They seemed to work really hard, and their movement looked a lot like teleportation. They weren’t that bad right?

Riku Masuchi never passed the academy exams, because he dropped out by sheer force of will. While he was entranced with them at first, an unfortunately inquisitive mind such as his was bound to think more about them beyond “I wanna be the Kage!”. Of course, this led him to doing what he did best: reading. And read he did, absorbing as many tomes on ninja history as he could. And Riku had quite a time looking through the tomes…

Seeing the wars-
-the violence
-the horror-

Seeing the extremes of the ninja world.

Riku Masuchi dropped out of the academy the very next day-and it was a big shame, too. He seemed to have a knack for Kugutsu, along with possessing surprisingly high intelligence. Oh well-if he didn’t have the drive to do it, he wouldn’t be a good ninja anyway. The civilian life was better for some than for others. As long as he let them do their thing, and he had no association with legal murderers, Riku decided to let this be.

His life was fairly boring, quite so and so. Despite his intelligence, living large was always out of his reach, but at least he was comfortable. Riku eventually found a wife, Sakura Masuchi, who also happened to be a civilian. The two of them settled down into a calm and quiet life, then eventually got the guts to try and raise a daughter.

And that's when everything went wrong.

Doragon Masuchi was a naturally intelligent child, going out of her way to explore the world around her. A naturally curious fellow, she found much boredom in the vast, vast, vast deserts of Sunagakure, and was bored rather quickly by everything else. This may sound pompous, true, but Doragon's early days were a restricted one-"Do not go there," "Do not read this," "Don't hang around people wearing headbands," were constants in her life.

As wiser men would tell you, humans love to do what they are told they cannot.

Sunagakure was a million, billion, trillion times more interesting when you knew that shinobi existed. Natural instinct told her that she shouldn't inform her parents about her newfound interest, but these scriptures were everywhere-no wonder her dad didn't want her wandering around, if he hated these things! But Doragon couldn't understand why her parents disapproved of the shinobi.

She never really would.

As time passed and the six year old became a ten-year-old, it became painfully clear to Riku and Sakura that their child had a great interest in shinobi. At first, they tried to ignore how much she knew about them ("She's a human, Riku, it'd be stranger if she never found out about them. Besides, she's already smarter than us.), and then they tried to ignore how much she seemed to admire them ("Ninjas are a lot more popular nowadays than back then."), and that stupid headband that cost 10,000 ryo ("It's cute, even I would like it, if I was a kid."). This was all aggravating to Riku, but he tolerated it.

And then he got a letter stating Doragon was causing a ruckus at school...by knocking out three people. And then a teacher.

Riku knew that she wasn't the type to start a brawl against people who weren't absolutely being vicious. And he also knew she wouldn't knock out someone.

Nor could she knock out someone.

That level of strength, at such a young age, could only be due to...

No way around it now. Masuchi Doragon seemed born to the ninja arts. Her parents were never aware that she had been studying ninja techniques. Bad enough that she knew that they existed-Doragon could even USE the techniques! Riku was paralyzed right down to his spine upon seeing his daughter jump across the room and run across the stairs without making so much as a sound. That was a D-rank technique meant for Genin. Masuchi did it without being in the academy.

This couldn't be happening. Maybe if he scared her out of it, she'd listen to reason. Sakura Masuchi did not want to interfere in the crucial moment; she simply watched as Doragon tried to convince her father that shinobi was her future.

"Come on, Dora. Ninjas are like gods. Even if you tried your hardest, you wouldn't be able to keep up. They aren't ordinary people."
"Not true!" The ten-year-old proceeded to grab her poor old mother by the waist and hold her triumphantly above her head, without showing any visible strain."I sneaked over to the academy and-"
"You left the house without me knowing?!"
"-...I sorta did! And I saw them practice. Most of them can't do the stuff I'm doing! They can't even perform body flickers!" She put her astonished mother down. "Ninjas have to train, right? I'm already stronger than those guys! I know you don't like ninjas but ya have to let me do this!"
"Ninjas can control things like water and, hell, even lightning. They're not normal, you can't be like them."
The girl responded by creating two small embers in her hands, looking annoyed. "I've got an affinity to fire, and I could even get more soon!"

"Doragon-no. You don't know what ninjas are like, you're a ten-year-old."

The girl sighed heavily and with a lot of frustration, before shaking her head defiantly. "I know a whole lot about ninjas. Like how they die." Her eyes tightened. "Like how they die a lot. Cuz being a ninja is really, really hard." Her eyes darted around the room nervously, and a bead of sweat ran down her neck. "The Chuunin exams, in particular, have an exorbitantly high rate of, well, death. I might die there. In fact I'll probably die there unless I'm really good at being a ninja."

"Listen to me, girl. If it's doing good for the world, I don't care how deadly it is. Your dreams should always come with a risk, else they might not even really be dreams. But being a ninja means you're going to kill people for the sake of being a 'hero'."

"Well, who says I have to kill people?"

"The world. That's how the world works."

"Then I'll just have to change the world."
Personality:


Trying twice as hard as everyone else?

Get used to it.

Strong-willed: By far her most recognisable character trait, Doragon has the voice of a lion and is about as stubborn as one, too. When it comes to her ideals, generally she refuses to so much as to even compromise on them, and generally tries extremely hard to follow her moral alignment. This has made many people think she is more durable than she really is, as Doragon tends to pretend to shrug off pain. Without her will, the girl would have given up shinobi life long, long ago.

Pacifistic: For a ninja, Doragon is far, far too slow to actually take someone’s life-not a very good trait for a glorified assassin. While she loves to spar against people and fight, she typically only likes to do so on her own terms. Everytime Doragon enters a conflict she didn’t start, her first suggestion is her and the opponent to talk it out. And when that doesn’t work, generally she doesn’t kill them.

But do not get things twisted. Doragon will reduce your arm to ashes if need be. And, worst case scenario, your heart.

Collected and Chill: The woman is very cool to talk to on an average day, being smart and witty, yet not too overly energetic or nice. She is likened to the “popular but not quite so popular” kids at school; people who get along with everyone, but not through any woo or glamour, simply through being funny and casual. A big contrast to the many traumatized ninja running around, Doragon is always an inviting presence.

Deep Thinking: While Doragon is renowned for her extraordinary strength-especially for a fresh chuunin-unlike many of her strength she’s actually quite intelligent as well. Her mind is naturally attuned to looking for details-perhaps a side-effect of her minor, constant nervousness-and she has a very good memory.

Witty: Simply put, she’s a supposedly funny shinobi who has a knock for being entertaining, even in the middle of combat. Doragon can be likened to Spider-man with her tendency to make jokes’ at her enemies, throwing them off their mental-game, hopefully. Notably, Doragon tends to make bad puns and jokes to herself when panicking.
Current date/time is Sat Oct 24, 2020 10:34 am