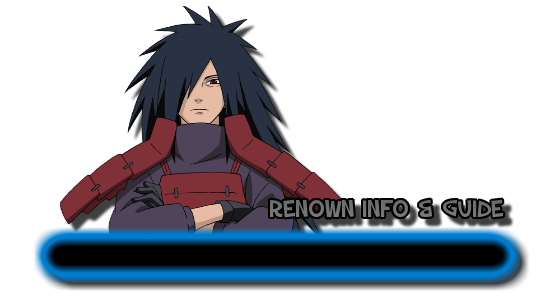 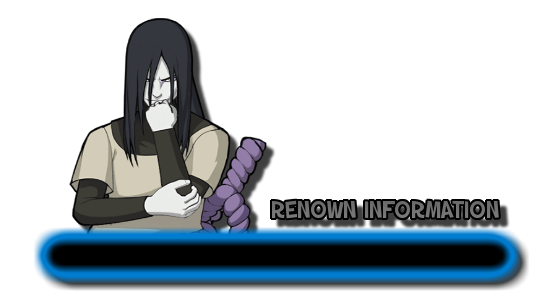 Renown determines how well your character is known throughout the shinobi world. Some characters will be fairly unheard of, unrecognizable by most, while others will be known by sight alone or through their titles or even just through their fighting methods. With Renown, you are able to determine how your character is known, by whom, and for what. Below you will find the various thresholds of Renown and what they grant:

As your Renown increases more people become aware of your deeds, accomplishments, and even your abilities. If renown is obtained through a guise or concealed appearance, you may track separate "pools" of renown for each separate life you lead, so to speak. For instance, your character may be an ordinary Chuunin with 1,000 renown. However, when putting on your Akatsuki robe and swirly one-eyed mask, you become Tobi of the Akatsuki and strike fear into your foe. In that guise you have a renown equal to 15,000 renown. These two separate pools, however, are treated as one in terms of claiming renown rewards and together would add up to 16,000 total renown. It should go without saying that if your alias is compromised, both renown pools are connected and you no longer benefit from leading two (or more) separate lives.

Being unable to recognize somebody with Renown means your character has no knowledge of the person whatsoever.

While it is not required that you track your renown, refusing to track it for the purposes of abusing the systems in place (hunting etc.) will be reviewed by staff and may result in discipline if it is assessed to be intentionally circumventing the rules.

Titles are what your character is called by the various people who have heard of you, and can denote a specific trait of your character or perhaps a way that you fight. Titles can include such things as "-of the Sharingan" or "The Yellow Flash" or "-of the Body Flicker" or "Kumo's Grim Reaper", anything that you would like your character to be called. You can list the Titles you wish to use when you register your character, or you can wait until later and make an Update when you reach the required Renown Threshold. But be careful when selecting your Title, because it cannot be changed.

When you hit a level of Renown that you are considered equivalent to a certain rank, that means your character is considered to be that rank by those that know of you. If you are part of a Village, then once you reach the Renown to be considered of that rank, you may request to be promoted to that rank and in all likelihood your request will be granted based on your deeds. The only exception to this is with 7000 Renown, when your character is regarded as Kage level, but because there is only one position for that per Village, your character will be unable to gain it. However, once a Kage position opens up for your village, your character will be among the top candidates to receive it. When skipping ranks, you can only claim the highest renown value. So when going from Genin to Kage, you may only claim the Kage renown and not the Chuunin, Jounin, or any other rank in between. The rewards may still be claimed however.

Gaining Renown is done by accomplishing certain actions that add points to your overall total. This can range from accomplishing heroic deeds and saving dozens of lives to causing mass destruction and chaos. Whatever might spread your name through the land, whether good or bad, improves your recognition. Below is a list of the various ways one might accumulate Renown, but if you think you've done something worthy of gaining Renown that isn't listed here, include it in your Update and it may just get added to this list.
King of Games


-Killing rewards 50% of the Player Character’s Renown. A significant mortal wound (the player would have died without timely medical intervention) may count as a "kill" for the purpose of renown, though this is always decided by a Moderator.

-Craftsman get 25% of the targets Renown when you kill someone with their creation. The Item must be an S-Rank item. Additionally, if someone does something epic or noteworthy while wielding an S-Rank item, the craftsman may apply for renown but this is decided on a case by case basis.
Current date/time is Mon Nov 29, 2021 3:12 am