The sun shone in its full strength, as was expected of a place called the Land of Fire, although due to the heavy canopy of the forest, the region was still cool, as fragments of sunlight made it as far as the forest floor. The Senju Forest was almost magical in its ambience, although in the nights it was said to be an eerie place. As Shiki made her way to the outskirts of the tiny village, which lay not too far from her own village, Konohagakure, the young ninja could see why the villagers of this place had chosen to set up their village here. Deep within the forest, it afforded protection from marauders, and in case of major issues, it was close enough to the Hidden Ninja Village to allow for a speedy response from the shinobi. Which was why Shiki was on this path.

She had seen on the Mission Boards that a village had a pig problem. Wild boars had placed them at risk of starvation, and something had to be done about these feisty pigs, before they got too far out of control. Correction: they were well on their way too far out of control, and had to be put down. While Shiki had no fears about facing the pigs, as she had been paired with a Jounin from the village, she just hoped that she would be impressive to the higher-ranking shinobi.

The thick growth of the trees began thinning out a bit, and as Shiki rounded a bend in the forest path, she saw the wooden gates of the little pig-harassed village. At this point, the young Uchiha stopped, hoping to see if she could catch sight of her new sensei before proceeding into the village. She wasn't late, she had made sure of that. Now, in order not to seem too hasty, she would wait to meet the sensei before heading to the village. She knew nothing about this new sensei, except that her name was Kimiko, and she was also Uchiha. 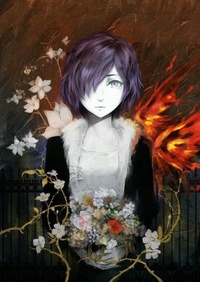 Kimiko was a little bit later than she had intended on being, having slept in a bit for her mission prep. Usually she liked to be early for missions so that she could lesve and complete them at a very specific and fast time, but that wasnt the case today unfortunately.

The slender young Jounin wore her usual outfit, which consisted of her Flak Jacket, a green hoodie with short sleeves underneath that, a Konoha uniform top under that, a pair of shorts, and her combat boots. The forehead protector that signified she was a Konoha ninja was firmly secured to her right arm, tied around her bicep for the moment. She tended to move where she had the band fairly frequently.

It didn't take her long to get to their meeting location, and quickly identified her charge. An Uchiha girl, genin was placed under her care for the time being, and Kimiko couldn't be happier. She enjoyed working with her clan way more than she usually enjoyed other people. And she certainly didnt like other teaching Uchiha genin. They could really be bad teachers sometimes, and Kimiko wanted nothing but the best for her people.