A Meal and a Smile 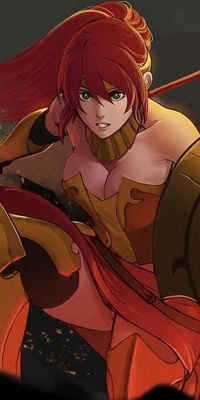 A Meal and a Smile

Niko had always had a soft spot for taking care of those who needed her, without ever having to be asked or expecting anything in return. It was what enabled her to care for Oriana, a slave-victim who was more skittish than a stray cat, and got it to the point that she was starting to gain the pink haired woman's trust slowly but surely. What enabled her to take in, care for, educate and train her long lost little sister, stolen from her shattered family soon after her birth and trained to be nothing more than a weapon, and transform her into someone who was not only a real person, but someone she was preparing for the Chuunin exams. Andariel really didn't need her help, or so she thought, but she too was in danger of stagnation had Niko not offered her a position on the team to help her step out of the shadows where she was comfortable and shine like the star the blacksmith knew she could become.

So when she heard that a fellow Jounin, and even more so, a fellow Blacksmith, was down on her luck and in bad spirits, it went without saying that she extended an invitation to the woman without a second thought.

Niko's home, conveniently enough, was in the market. It was the home she had inherited from her Uncle, and while she was supposed to have also inherited the forge and shop that was attached to it, the amount of debt she still owed meant that they were keeping the building ownership paperwork until she paid the debt in full. They still let her use the forge part, thankfully, but not the shop. That was something they were going to be hanging over her head for a hot minute until she came up with the raw Ryo to get everything back all at once. It was a daunting goal, but once she perfected her art and got her name out there as the one-stop-shop for everything from crafting the weapons from raw materials, enchanting and Fuuinjutsu attachments all the way to lessons in how to use the weapons she just created for you, Niko would be able to do it all.

The home was a simple one on the ground level on the back end of the shop. Wasn't overly fancy but well maintained, and had a few rooms, modest but decent living. That perfect middle ground that showed she wasn't in poverty but she wasn't that well off either, everything with function over form. Between the house and the shop that was closed off was the forge, connected by a single thick door, but it was closed for now; normally Niko could always be found within, working on one thing or another... but not today. Today, she was working on ensuring that her home was tidy and clean, the floor swept and dishes done, and a meal prepared.

The house was empty tonight, everyone tasked out or training, so it would be just the pair of them and they could talk shop, discuss matters fully, and hopefully, lift Shimiko Chinoike's spirits. She had never really had a reason to interact with the woman before now, but as a fellow Blacksmith, there was a tight knit but not well known source of information that flowed freely between people of the craft. So while it had taken a little time to reach her, Niko had heard of Shimiko's plight, and offered her a free meal and a chat... time would tell if she perhaps had overprepared.

Niko herself was dressed in a rather [url=https://i.imgur.com/3BfxqdB.jpg]casual but somewhat fancy outfit[/color], barefoot and padding around the kitchen as she finished the last few touches on a rather large meal. On the large table was the food she had prepared; a massive bowl of rice dominated the center of the table, surrounded by a few dishes. Mixed vegetables in one bowl, fried pork in another, some beef in a brown sauce on another plate, a large bowl of egg drop soup and a large plate of dumplings seemed a bit much for two people, but considering the number of people who would be dropping in and out in the next couple of days, she had no doubts that it would not go to waste. Leftovers rarely ever lasted long in this house. It also helped that, due to necessity, Niko was an extraordinarily good cook.

The invitation had been clear, and it was almost time for Shimiko, if she decided to show or not, to appear.