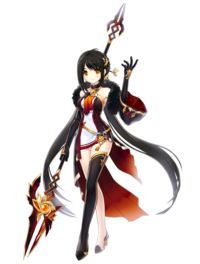 Hours had gone by an all Akeno been hearing is the rumbling sound from tunneling her way through the land. All she has seen is the walls of moving earth moving apart for Akeno to move through only to close behind her. She figured it was close to dawn if not morning already. Which means that she should be close to the Land of Birds by now. Given that earlier there was nothing but rock for a good while and now she's witnessing dirt and roots.

Besides she can feel how exhausted her body was starting to feel and taking notice that she is moving slower than before as well. So Akeno chose to emerge herself from underground and finds herself in a field of grass. Behind her at some miles down the horizon is the line of mountain peaks. To say that she was tired is putting it mildly, and she climbs herself out and takes a moment to look around. Given the geography and Great Chang Mountains behind her. Akeno can safely assume she is in the Land of Birds now. Akeno finds some obscured spot to hide herself in so that she can at least eat some of the sausages, oats and fruits, and a piece of bread. Hugging her bag close to her chest under the vegetation, Akeno slipped into a slumber.

A couple of hours have gone by as the sun rose higher indicating that it was afternoon now. Whatever devil decided to put that sun at the right spot to shine directly at Akeno's eyes through the leaves hanging on a small tree. It wakes her up as she felt her body was sore from the amount of chakra she spent. Akeno can tell that her chakra hasn't recovered completely, but it was closer to half right now. Still having some rest was better than none as she checked her surroundings first for any Konoha movement before climbing out of her spot. Some of the leaves got stuck in her hair, but Akeno went ahead and took them out as she resumed her path through the Land of Birds and towards the Land of Wind. 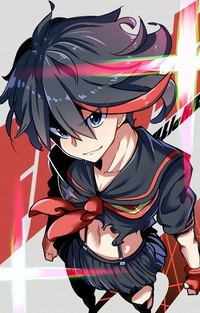 Re: A Short Rest

Just like a mole, the earth would break and a head would pop out scanning the area at neck-level. There was no sign of Akeno, but her presence was certainly heavier here than the Land of Earth. Her outfit was a bit different from her usual garb as she appeared more battle-ready than usual. Masuyo dressed in her standard gear choosing not to wear the common Hokage garb. Her footwear consisted of standard black sandals fitted for comfort and security. With the toes and heel left exposed they provided additional balance, while the rest of the foot up to the ankle was protected by the thick nylon material of the sandal. The soles of the sandals are reinforced with hardened material to resist heavy impacts and weathering. She wore a pair of loose fitting black pants with the bottoms near her ankles taped securely in white bandage wrap. This provided balance and reinforcement to her ankles while closing off the ends of her pants. In addition, more bandage wrap was wrapped around her right thigh which allowed a navy blue holster to be strapped over comfortably. Around her waist she wears the basic utility belt which carries two green holsters on her right side along with two tool pouches around her back side and a canteen to the far left next to her signature long sword, Blacktongue.

A titanium mail shirt is worn under a common long sleeve black top having a red seal of fire placed on the outsides of each sleeve towards the upper arm. Over that was a fitted green flak jacket provided by Konoha's armory and fitted with steel plated inserts making the jacket like a more flexible breastplate having the steel in all parts of her leather. The jacket was zipped up and secure firmly on her body. She wore a pair of banded steel arm guards which protected the backs of her hands and down to her elbows with a narrow soft spot on the backs of her wrists to allow freedom of movement. Around her forehead Masuyo wears her forehead protector as it should. The black cloth is tied in a knot around the back side of her head keeping her hair in place with the steel plate facing the front for identification. The steel plate has Konoha's emblem engraved on the front. She wore a piece of cloth around her neck which could quickly be moved up to cover her mouth and be worn like a mask for essential stealth operations. Masuyo has straight black hair which extends down to her mid back. Two strands of hair drop down touching her chest which leads into her bangs, those being cut shorter and swept to the side. She stands at 5'9 weighing approximately 145 lbs. Her fair skin is complimented with her voluptuous form which is completed with a pair of hazel eyes. Covering her entire body was a large black cloak with the hood down.

She'd place her spear out in front of her before pulling herself up on the earth. Immediately she'd stretch in place and let out a huge yawn. "Boy, she really put in the effort to flee. At least now we can travel on foot." Masuyo said confidently finding Akeno's bold scent around the area they stood which led in a single direction further away from the lush green of the Valley of Dreams and towards the Savannah. So the Land of Winds? What ever drew you to that God forsaken place... The squad finished their final short rest before travel towards the Land of Wind staying hot on Akeno's trail.