Now much more refresh, like some 8 or 10 hours later, Shinoskay would once more wake. Upon waking, he would first glance over once more to akari before then scanning the room again. the Guards posted outside his room was still there, that was for sure.

Shinoskay didnt like laying in this bed, but there was little else he could do while guards were posted outside of the room. While looking over towards Akari, he began to focus chakra around himself in much the same way he charges his body with electricity or how he will surge chakra into objects for chakra thread use. He wanted to be gone, to not be there anymore, he wanted to as he pushed his chakra out across himself. He was relatively familiar with henge jutsu to change his appearance but he had no deeply developed concept for how to create a chakra cloak across himself, focusing on the alteration of appearance he had his chakra dipict the white of the hospital sheets he lay on. First focusing on that color forming across him before then evolving this to feel the bed with his chakra to then mimic it through to the opposite side in much the same way he would surge raiton chakra through himself.

The jutsu was a simple concept that was fairly easy to learn but it wouldnt do any good against someone like himself. He could tell this because as he did it he felt his own chakra still leak out past the chakra cloak as he formed it to conceal himself, finally he would turn away from Akari before staring up at the ceiling. The chakra cloak made it unnerving to look up at the ceiling because the boy could no longer see his own nose or eyebrows, something one would normally see but now his was concealed via chakra. He would stop using his chakra to conceal himself and shift to focusing it into his arm. He had successfully charged a kunai with chakra, he would easily reverberate sound through objects to produce discernible speech and he could surge raiton through himself to hold a charge ready to electrocute anyone daring or capable enough to try and strike him... just now he manage to use chakra as a cloak to conceal himself and so it made sense to use Lightning chakra to charge his attacks for more offensive reasons over defensive.

He would charge the Chakra into his arm much the same way he would for forming a circuit in his hand and then extended it out to form a controlling network much like what he used to control his puppets. Using the Electricity to stimulate and force his muscles to tense as he wanted in order to force more strength into them then he himself could normally muster. Obviously, on top of the Ability to manipulate his limb for greater power, this still used raiton and as such would be able to shock those struck as the element tends to be useful for. 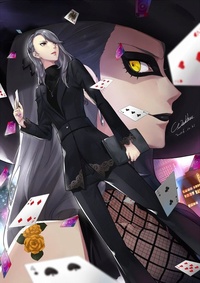 Nariko had already received the report from Shimiko, having read everything she needed to about the situation. The information was very worrisome, and she would need to send some people to look into the troop movement Shinoskay had reported, but for now, there was another matter at hand.

Shinoskay had, for all his information, had a severe breach in protocol for quite no reason, and that was troublesome as well. Had he not visited her previously, and had he not delivered such a trove of information, Nariko more than likely wouldn't be dealing with this herself, but he had made himself known to her.

She wasn't quite sure what to do with him. On the one hand, he needed to receive some punishment, but on the other, it appeared he stumbled on something that might bode badly. Had he done as he should have, they would be none the wiser. It was a bit of a problem.

So it was that the Raikage found herself in the hospital, in front of the guards that were stationed outside Shinoskay's room. She wore a simple Jounin outfit, with the addition of the Raikage hat to signify her position. The guards saluted her and allowed her through the door.

Perhaps she would stumble upon him training. If this was the case, she would wait until he stopped to speak, choosing not to interrupt him and simply observe. Should he stop immediately, Nariko would speak. "Shinoskay, the information you provided is of great interest to me. And I commend you for bringing back Akari and yourself safely, although her fate still remains unclear. The comatose symptoms are.... hit or miss as to whether she will awaken."

She shot a pitying look over in the girl's direction. Many had died, few had awoken from this. She shifted her gaze back to Shinoskay. "So. What would you have me do about you? You did good, and are to be commended. Still, I can't just let transgressions go every time we have something beneficial come out of it. Mission parameters are to be followed to the letter, unless there are extreme circumstances that force you to do otherwise. The two of you never should have left the borders. So again, what would you recommend I do?"
_________________

Shinoskay was not using his sensory skill nor was he looking around the room at the time the Kage had arrived, he was pointedly looking at Akari and then the ceiling... neither of which would have afforded him the knowledge that the kage had arrived and as such he would not be aware until she spoke... he almost jumped out of his skin as she did and once more he found himself comforted by his own conduct. Shinoskay would bolt up into an upsitting position as he heard the voice and immediately upon seeing the kage he would quickly shift to his feet before then bowing to the kage as a prostrated show of honoring. He would remain down as she spoke, listening to her words, his sensory now active, and as she ended with her question he would already have an answer "have me take responsibility for what I have started."

He wanted to feel he wasnt sure where that came from and his face would probably show his confusion as he forced himself to try and consider why he suggested that but a small part of him knew it nagged at him and he had wanted to do it the moment he found the tracks. while he searched in his mind for any other reason why, pushing that reason aside, he remained bowed to the kage while he waited for her reply.

Nariko frowned, a thoughtful look on her face as he gave his answer. She had to admit, it would provide several solutions to her problems. Not only would she be able to utilize him as an effective guide to her scouts that went to investigate, but it would also give the genin an opportunity to prove himself as he had asked her to do previously.

Deciding that it was a good test, Nariko nodded her affirmation. "I think that's justifiable. However, I'll be assigning you to an ANBU of mine for the duration. You're to act as a guide and support member, and to follow her explicit instructions during the mission. I don't like to risk my shinobi unnecessarily. This is purely a reconnaissance mission, unless you're forced to defend yourself or Akame otherwise orders differently. I trust her judgement."

Nariko smiled at the boy. "That will be all. I'll have her get in touch with you when you're to leave. Make all the necessary preparations you need when you can. You're free to go."

If there was nothing further, Nariko would turn to leave, letting the guards know that Shinoskay had her clearance to leave the room, but to keep an eye on Akari for the time being. She wasn't really in trouble, but Nariko wanted to know when or if she was to wake up.
(Exit)
_________________

Still without raising his head, Shinoskay would firmly respond with 'HAI' (Japanese for affirmative) and nothing more as she told him her thoughts on his response. He would remain bowed as she turned to leave and he would say or do nothing even as she went to the guards and only finally recovering as she left his sensory range.
_________________