Welcome Guest! You have made 44 posts! 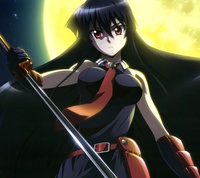 Rin refused her offer to help him up, electing to get up on his own. Tsuyo stood and placed her hands on her hips after taking a step back to give him room. On instinct her head cocked to one side as she began to wonder just how she had done so much damage with just two blows. She hadn't hit him very hard either time, just enough to maybe make him see stars for a bit. But this boy was acting like his arm was broken, letting it just dangle. Tsuyo only shook her head at his obstinacy, amazed he had folded like wet paper at those two shots. Looked like he was having issues seeing too, which amazed her further.

"Well, I'm not too sure how you got that banged up from those, but I think it's time to call it a day." She then turned and walked back towards the log she had been on when Rin initially came to her. Tsuyo stopped a couple meters before reaching it to finish what she was going to say. "Go home and rest up. Meet me at the gates in three days time, and be ready for a mission. Don't do anything dumb." With that, she'd jump back up onto the stump and return to her position on her left hand in a handstand. She still had a bit of training she wanted to do. "Good job today. Keep it up."
_________________


"Death comes for everyone. I'm just moving you to the front of the line."
RinUchiha

Rin knows the reason why he’s taking so much damage, but he’s afraid it is an excuse for his weakness. He couldn’t allow anyone to know that while he is sensing, the chakra used for sensory stimulates his five senses. However in exchange the amount of pain registered in his body and mind is considered double the pain. So what might seem a simple chop at the shoulder would be equivalent to a weapon smashing onto it instead. It is annoying to Rin, and hence is why he generally keeps it on the low profile unless somebody is building chakra to produce ninjutsu. Then that would trigger his sense, but if it is something as simple as focusing chakra into a single part of their body then Rin would have to be actively sensing for it.

It is one of the pros and cons of having such a unique ability towards the sensory category. One Rin will eventually overcome, but now isn’t the time for it. The boy would admit that it didn’t seem likely he should be taking much damage for in reality it is the nerves that are being damaged. The chop mainly was the one that sent his nerves crazy through his right arm. Hence the amount of pain it is under right now and even to the point where the muscles would occasionally spasm. Even so Rin was determined to stand up, and that’s when Tsuyo decided to call it for the day.

In truth the boy felt like he failed the test as he is hurt all over from the previous beatings. He also felt that he didn’t give his best to this training session. Perhaps he should bring his katana next time, but Rin doesn’t feel comfortable swinging that thing at his teacher. Fear of an accident grips on his heart and mind when that thought occurred to him. However there is a saying that Rin has heard of from his mother once. Who said that there can be heaven and earth only because they work in unison. If there is all earth yet no heaven then this world would split and crush everything on it. However if there is heaven yet no earth then everything will fall and continue to do so.

“What time?” Rin asked in regards of the meeting at the gates. The genin assumes morning just before dawn breaks over the horizon. But Rin wanted to make sure as he still holds his right arm up with his left. It still throbbed, but Rin makes a mental note to probably sit down and rest before he gets home. It’s not really the first time he lost use of his arms, but for this case Rin figures a bit of rest would let his muscles to repair enough to at least move the right arm.

In either case once he hears the time from Tsuyo to meet on the third day, Rin will bow in terms of respect. For no matter how beaten up he may have been, Rin knows to maintain respectful manners even in the eyes of failure. “Thank you Tsuyo-sensei.” Rin spoke before straightening himself up. From there Rin will take his leave from the training grounds, but just outside of the perimeters Rin leans his back against a suitable senju tree and proceeds to sit on the ground. Rin didn’t intend it, but he ends up sleeping for an hour or two. When Rin woke up he realized that while it still hurt Rin can now at the very least move his right arm. It was better than before, and from there Rin returns to the Uchiha estate where he’ll officially rest for the night.

"Dawn," Tsuyo replied to her newest student, keeping her reply short as it became harder to breathe due to her positioning. She had been half expecting Rin to try and attack her despite her telling him to stop, though it seemed he had enough sense about him to know when he was at his limits. He had gotten abused today and badly enough that it would hopefully cause him to reflect on just what he would be expected to be capable of once he was older and a higher rank. He needed a goal to work towards, and seeing just how outclassed he was by others in the world was the best way she could think of to give him one. From here on out she expected improvement in some way every time they met. It wasn't a requirement she would tell him about, but one that she would make sure he knew about through her actions and lessons. Tsuyo herself would stay at the training grounds for a few more hours, leaving just after Rin had woken up and decided to leave and as such did not pass him on the way out. She needed to get some things ready for their next meeting.


"Death comes for everyone. I'm just moving you to the front of the line."
Go to page :