The fog is lifting, slowly 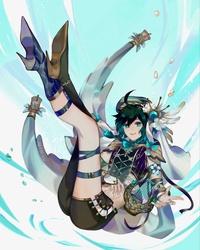 The fog is lifting, slowly

Being alone and free had its perks sometimes. While he definitely didn’t agree with his parent’s methods regarding training him, he did have to admit training was never a bad idea. He still had limited knowledge of jutsu outside of his own clan’s techniques, and a few basic techniques. It was worth at least trying to learn a few new jutsu, if he ever wanted to be truly independent. Being free of his parents and their control was incredibly tempting, and worth any and all injuries and exhaustion he might endure to eventually become strong.

With that in mind, he’d thought of a few techniques he wanted to learn, including the first one he was here to practice today. The first of the bunch, the Haze Clone, was a slightly more advanced version of a normal clone technique. It seemed easy enough at first glance, only two handseals, but it took practice, like any other jutsu. There probably weren’t many people in the world who could learn a jutsu instantly, or so his thoughts went.

His own attempts weren’t anything special at first. The clones didn’t seem quite right, or he didn’t make enough of them. The first few were downright pathetic, even though he’d practiced the clone technique many a time in the academy. But, as was the case with all things, he grew better as he practiced. Finally, after a little bit of effort and using the dog and tiger hand signs, he managed to produce a fully functional clone with a small victory cheer. Finally! He really needed to get the basics like this down, powering up and going on bigger missions was going to be the only way to really be independent from now on. Even now, the only reason he was able to live freely away from them was because a sympathetic cousin of his was renting him a tiny apartment for minimal cost.

Now, what jutsu to learn next?

Re: The fog is lifting, slowly

Chen rarely trained nowadays. With Masaru gone and the Mountain War ending in Iwa's defeat, the need to prove himself was gone. Sure he needed to be strong for the village's sake but he had told himself that if the village were truly in danger there wasn't anything he could do to stop it. Iwa's enemies were all exponentially more powerful than him. He was better off reading and turning his attention to strategy. If Iwa were to be free of its foreign influence then it would probably come at the hands of a skilled mind rather than a skilled body. He kept himself in shape but not much else. Even now, he clutched a book in his hand. It was obscured by the long dark robe that he wore and it would remain as such until he found a spot that he could sit down and read.

As Chen walked along the training field, he spied a genin training a clone technique. Chen stopped to observe the shinobi. He stared at the lad dramatically as his black hair fluttered in the cool mountain breeze.
_________________

Re: The fog is lifting, slowly

The lad had decided to ignore him and do whatever he was doing or not doing. Chen decided that the individual wasn't all that interesting and so he marched off to another area to go read his book. Chen spent the afternoon reading in silence. After a few hours, he retired to his home.