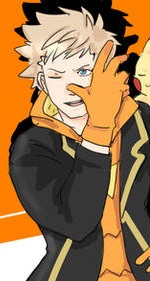 Mission Name: Protect the Farm
Mission Type: Guard
Mission Rank: C
Mission Goal: Defend the Farm from attack.
Description: Mr. Asano is a farmer located not far from Konohagakure that enjoys bringing his fresh produce into the village to sell, but lately he's been unable to turn a profit due to a small band of bandits stealing most of his crops! Do what you can to save as much of the upcoming harvest as possible, and if you are able, take out as many bandits as you can.
Payment: 15,000 Ryo
Requirements: Chuunin

Making his way to the farmhand Chika was already on guard. After scouting the bandits he had seen they had been linked to the farmhand and were making their way to the homestead as he spoke. If what he saw was correct, they were about to attack if not already attacking it as he thought about it.

Arriving at the farm hands house, Chika was glad to see that but no attack it started yet, but the signs of a attack starting soon were there given that he could see how many Bandits coming in to the location from his large range of vision. Thankfully no enemy shinobi either. Going up to the farm hands door he knocking quickly let him know that. He was son from konoha to defend the location and the board up the house if possible from the inside. Moving his puppets into position, Chika would prepare for the enemy attack.

Thankfully Chika didn't have to wait long, as the bandits began to slowly come out of woodwork. Having his puppets foot Take Aim with their bows, he began to shoot down the weaker ones one by one, and while he was no Archer, his extreme decks compass for that quite well. He can see that the bandits were visibly confused, and while he could see a leader among them he couldn't snipe them down his particular location. Instead he just continued to pick off the weaker ones so using his bow and arrows. Soon enough however it was just the leader. Chica smiled, as leader of the small band looked quite concerned. Shifting the location of his puppets he'd take aim and fire, the last one going down with a solid *thunk*.

After the battle, it would go around collecting his arrows, finding that none of them were thankfully not broken so he wouldn't have to replace any of them. If you go up to the farmer's door and after a small knock and confirming that he was in fact not a bandit, get reassure the man that the bandit group would not attack him for the time being.

And now, it was time to go home and report in his missions.