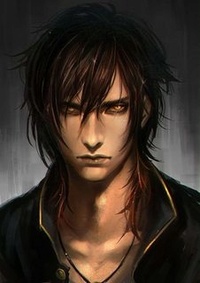 Tomonosuke found himself at the training grounds alone. Though, there were a few others that were training here. Though, it was mostly quiet. He would have given some hints and tips to some of them, but he was here for him. It was good that these shinobi wanted to hone their skills. The young samurai looked toward the wooden dummy that rested before him. It was an old tree stump that would have to work for the time being. He would remove his muscle shirt to expose his dragon tattoos etched in his skin. The Sasaki dragon shown largely on his back as he took slight breathes. He would strike his fist toward various parts of the stump. The cry of wood sounded out as he made contact with his fist. The stump continued to let out noises of protest as Tomonosuke focused on his new enemy. It almost seemed like he was wasting his time, but there was a method to the madness. He didn’t often practice unarmed contact and felt that it was probably a good time to work on certain moves. It beat striking a sword against it. The stump looked like it had taken a few weapons and was obviously rotting. There was no way he was going to disrespect his katana on this piece of junk.

It was starting to get boring. His flesh urged for something more. He would occasionally speed up his strikes as he formed muscle memory with each placement of his fist. Tomonosuke visualized the target and started to close his eyes as he would try to “feel” out the stump. The repetitive motions seemed like he had been doing this for an eternity. After about 20min, he opened his eyes and took a sigh. The samurai hadn’t even broken a sweat. It felt like time had been passing slowly since he had been here. Looking up toward the sky, he couldn’t really see much of a difference between the sun’s position the previous time looked up. He let out a low hum as he sat down next to his clothes. Tomonosuke drew his attention to the others in the training ground as the numbers increased. He wanted a real challenge and wanted to feed his boredom as he was alone.
_________________ WC - 451
Chakra - 50/50
@Tomonosuke
It wasn't often that Kyousuke found himself looking to spend time in public training grounds, but for the moment he had no other choice. It had been awhile since he had left the Ganryu province for Kumogakure no Sato, and in that time he had learned that it was a necessity to coexist with others that were looking to spend their time in training. Back home in the Sasaki manor there had always been private training grounds for him to use, but such was not the case in Kumogakure. Usually he had spent his time meditating in the wilderness, searching for waterfalls or mountaintops; serene atmospheres that would let him hone his Matagi Shingan. However, whenever it was time to train his combat prowess there was no other choice but the training grounds.

And so the Sasaki found himself moving from rooftop to rooftop, speeding his way to the closest training grounds near the home assigned to him by the village. In his mind the ideal training grounds he had hoped to come upon was one completely devoid of people, allowing him to purely focus on the skills he had fully intended to sharpen, but if one or two young shinobi were there as then he would simply have to suck it up and just share the training grounds, it was public property after all.

As he arrived on the first grounds, a familiar individual would catch his attention. The dragon of the Sasaki was a mark he could recognize anywhere, it was a mark likewise ingrained on his body. The sign of adulthood for his people. An unknowing smirk would form on Kyousuke’s lips. Silently, he walked to the shade of a large tree, unstrapping the katana on his waist and laying it beside the roots. Finally he turned his attention to the man who had been using a tree stump as a punching bag. The sight of family was one welcomed, especially in a land so far away from home, there was much he wanted to ask, but for now they would greet each other the only way the Saski knew how. “Bored?” He asked as he removed his shirt, revealing to the man the same dragon on his right arm, though Kyousuke knew showing the dragon was unnecessary. They had seen each other before, long when they were but children. Kyousuke would begin to stretch his body, almost warming up for what would come next.

“I don’t blame you. Boards don’t hit back.” Suddenly he would lower to a southpaw stance, body turned sideways. “Lucky for you, I was just looking for a sparring partner.” Challenge laid, the Sasaki heir would gesture his front hand. Come at me.
♡Ash♡
_________________

“You guessed it. They don’t make stumps like they used.”

Turning toward the newcomer, as he started to get lost in his own thoughts, his wish was finally granted. It had been awhile since he last sparred with his cousin, the heir to their own clan. Tomonosuke’s body reacted at the sight of the familiar. He would quickly go over his sparring partner’s stance before mimicking it. His body was screaming for some action. The blood through his body began to pulse heavily. The adrenaline started to flow through him as a smile graced his face. The smile was a bit sadistic, but he didn’t care for the way it looked. “It’s good to have a fleshy target, once in a while. I’m not going to go easy on you “Lord” Kyousuke.”

Tomonosuke would oblige his training partner and send off the first strike. He would move into his opponent to begin a light assault. Tomonosuke would jab his left fist twice toward his opponent’s ribcage in quick succession. He then lifted his right fist to perform an uppercut toward his clansman’s jawline. There wasn’t much need to start out with anything too complex. He wasn’t sure how far this spar was going to go. It wasn’t like he was aiming to inflict as much damage as possible. Though, what was truly a spar without a bit of pain. Pain was something that one would learn to fight through. Training through the pain was one of the many ways the Sasaki trained. It was a pain he could certainly appreciate. One that kept him focused and pursuant of a greater future.
_________________

WC - 282
Chakra - 50/50
@Tomonosuke
"I wouldn't have it any other way, cousin." The Sasaki heir quipped back, ignoring the sarcastic formalities. With that short exchange the fight had immediately gone under way.

Following Kyousuke's urging, the other Sasaki would close the gap and initiate the first strikes. Two quick pawing jabs made in succession, both aimed at his body from the same left handed stance Kyousuke had taken. Responding, the heir would quickly swing his right foot backward past his left, shifting his stance to both mirror his opponent's and dodge the first jab. The second punch would come not a second later, again Kyousuke would evade similarly, swinging his front foot backwards to switch stances and dodge. Now they were back to how they had started with Kyousuke stood southpaw to create an open stance between the two.

Finally Tomonosuke would launch a right uppercut, aimed square at Kyousuke's jaw. Just out of jabbing range, the uppercut would be completely out of reach as Kyousuke leaned his head backward to the direction of his left knee predicting a right straight to just whiz by his head. Either way, he had evaded perfectly and now it was his turn to dish out a combination.

Swinging his head's momentum back forward into a pull counter, Kyousuke would launch a chambered left straight directed into his cousin's chin. Nearly as fast as him and just as coordinated, he hardly expected such a basic counter to work. And so masking his next move with the left straight, Kyousuke's left hind leg would shoot to a roundhouse kick directed at body of his opponent, aiming to damage the exposed liver.
♡Ash♡
_________________