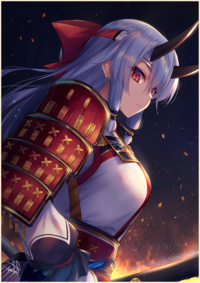 The gates of Kirigakure. It was a nice change in comparison to the gates of Kumogakure. The scrutinising eye of the Tengu craftsman could instantly see these were not placed here by the hands of an apprentice. Even if the walls sported natural weakness, whoever had given life to this massive construction had done so with an eye for the same weaknesses the Tengu was now analysing. These weaknesses should have been greater. Easier to abuse. But the engineer in service had done what he could to minimise any possibility of an easy exploitation. Hua Li smiled at the idea a challenging engineer lived within the Lands; a tradesman of worth to which the Tengu could measure themselves.

Hua Li had an eye for the Arts. Unlike many of her kind - that is, the Kumo-nin - she was an artisan first, and a shinobi only in second. Though her loyalty to Kumogakure was not one that had any cause for doubt, she was hardly the best unit in the army of the Kumo-nin. Neither did she care for that; the Head Artisan of the Tengu branch's interest laid solely with improving the potential of her trade. And since the Tengu weren't all that numerous to begin with, she was already facing a challenge right of the moment she was installed in this absurd seat of responsabilities.

And misery loves company at that. So to make matters even more uncomfortable to the young Tengu, Kumogakure had requested her to proctor during the Chuunin Exams hosted in Kirigakure. She couldn't say she was looking forward to it. At least, until she actual laid eyes upon those massive walls, she wasn't. Now, Kumogakure might actually have a hard time dragging her back towards home - yes, the Tengu was more than certain she'd pick up a thing or two during her stay.

Stretching to get her blood flowing after such a long road across the seas, she checked one last time if her armour was in place. The black metal of her demon-forged chest piece rested snuggly on top of the cotton tunic she wore. Glistening jade emphasised the horrendous yet artistic design of devouring demons etched into it and disturbed the untrained sufficiently to leave her alone. A subtle warning, if anything. Cotton pants hid her legs, further reinforced by leather faulds and cuisse. A mote of protection, yet nothing too elaborate. Insufficient to inspire war; sufficient to betray caution in a foreign land.

As the ship inched ever closer, a different landscape ditched the solid section of the walls for a more gruesome display. Cratered ground, blackened rock. The remnant of a massive warzone by the looks of it. The Tengu tilted her head, a pensive look upon her face. The walls, despite their strength, had fallen? And without the protection of solid stone, the Chuunin Exams were to be held as foreigners were about to swarm in any moment now? Was this an instigation of raw chaos; a first of challenges for the genin about to disembark? She liked it already. If this was the sort of trials Kirigakure was about to throw at them, this whole event could actually be fun...