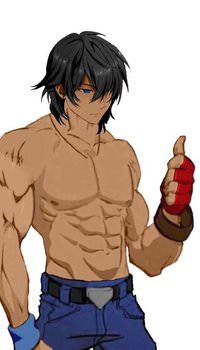 Mission Name: Feed Billy Jo
Mission Type: Chore
Mission Rank: D
Mission Goal: Feed Suzuki Suzuru's Ox Billy Jo
Description: One of the local farmer's surrounding Konoha named Suzuki Suzuru has had an accident breaking one of his legs and is in hospital. Mr Suzuru has put in a request for someone to go to his farm feed his beloved Ox Billy Jo.
Payment//:: 10,000 Ryo
Requirements: Genin+

Tenchi made his way slowly out to Suzuki’s farm, where he’d been told he would be taking care of Mr Suzuru’s ox, Billy Jo. It was a weird name for an ox, Tenchi felt, but that wasn’t his concern. He needed money to pay for his equipment and upkeep, and though he was sure he could ask his father for help, he was too proud to fall back on his family ties until he had absolutely no choice.

So here he was, doing his job, like an adult. He hadn’t known that there were so many... well, so many mundane tasks for ninjas when he’d decided to follow his sister’s footsteps. After viewing the mission board, he’d lost a little of the romanticizing he’d had for his chosen profession. Thinking about it now, it was probably a good thing to lose. At least now he’d move forward seeing this as a job, not some fantasy story like in the books his sister used to read.

As he neared the farm, Tenchi cracked his knuckles and searched for the nearest farmhand. He was goin to do his best to get his task over and done with so he could get paid faster.

”Excuse me, Sir?” he said, catching the attention of a farmhand, ”I’m the one here to feed Billy Jo. Can you tell me where he is?”

With a large grin spreading on the farmhand’s face, the man turned and pointed Tenchi to a large steel pen and, only barely containing his laughter, began to speak.

“He’s in there, just make sure you don’t do like the others and rile him up before you get him fed. He likes to ‘play’.” With that, the farmhand returned to his task, and Tenchi could hear him laughing as he walked away.

Stretching the back of his neck, the Genin started toward the steel pen and his date with an ox.
Tenchi

It didn’t take him long to find out just what kind of animal he was dealing with. Well, he knew it was an ox, but by the way this ox started slamming into the metal pen at Tenchi’s approach, the boy could tell that he was in for an excitable time feeding a beast of burden that would be just as happy chasing tenchi as he would be eating the food Tenchi could provide.

Glancing back across the way at the other farmhands, he could tell that he really was on his own. With a sigh, the Utzuki boy searched for the feed and hay he would be taking into the beast’s lair with him. There was no point going in there without the food, that was for certain. It only took him a few moments to find the items, and quickly as he could, he had a good bundle of hay and a bucket of feed at the ready.

If all else failed, he could drop the feed behind him while Billy Jo was chasing him. At least that way, he could say that he did accomplish the mission before running away. Right? Supplying the ox with feed was the mission. Did it matter if the feed was put in a specific spot?

Tenchi took a deep breath and hopped the metal pen, landing lightly on his feet despite the load he was carrying. He took a look around and his face paled. The thing he feared most was ahead of him... an empty pen.

A puff of breath behind him answered his question before he could finish it.