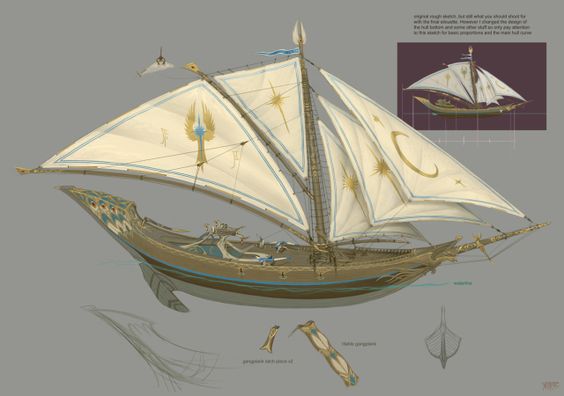 The Sea Bitch was a small ship used for trading in small volumes between the Land of Fire and the Land of Water. The two villages had been allied for a while, and their trade route brought prosperity and blooming businesses to the two Land's ports. Between the two lands was the Land of Whirlpools and the Land of Waves, but the captain of our tiny vessel knew better than to adventure out to those waters. Both the Land of Waves and the Land of Whirpools could be incredibly dangerous for even the fastest of ships, and it took an expert navigator to sail between the two safely towards the Land of Water. Once there however, profit awaited even the worst of merchants. The cultures were quite different, but there was money to be made in trading wood for fish and other minor comforts. Since the two countries wee allied, there was very little danger in these waters appart from whirlpools and the occasional large wave. One had to stay clear from the first and face the second head on, but this usually only delayed a fast vessel like the Sea Bitch for a day or two at most. Kirigakure no Sato was located on the western side of the Hozuki Isle, which only made it more accessible for trading.

For such a small vessel, the Sea Bitch had seen a lot. It had been repaired over one hundred times, fit with new wood and sails, new masts, and even its entire interior had been redesigned several times to fit many purposes from fishing to trading. It had faced countless storms, and it still stood proud above the sea water. It was quite the vessel despite apparently having nothing ordinary about it. Perhaps this was why it was chosen by Uchiha Akihiro for this particular task. You see the most important thing about a vessel isn't the wood it is made of, or how many sails or canons it has. The most important trait on a ship is how lucky it was. And damn, that Bitch was lucky if nothing else.

Today it was manned by three men. It could house five, but three men could easily handle all the work required to sail the Sea Bitch. To put it bluntly, these three men were not its usual crew. But the ship didn't mind. They were as skilled as any sailor and perhaps even better fighters, to help to keep her safe from pirates. If there was one thing the Sea Bitch had never been, that was a pirate vessel.  Today its route was not between the Land of Fire and the Land of Water. Sure, it stared in the Land of Fire and made its usual path between the Land of Whirlpool and the Land of Waves quickly arriving at the Land of Water. There, it made the usual trading deal, but then...instead of coming back West, the Sea Bitch went North. Determined to find new, better trade routes, the Bitch was packed with provisions and its crew set sail towards the Land of Lightning's shores.

These waters were not as safe as the one from before. This was why the crew remained on constant alert, day and night. They took shifts between the three of them to guide the ship and stand watch. Every once in a while they would use the Sensing Technique and would constantly use their eyes to search the area around them and the horizon for potential enemies. Whenever they saw a suspicious ship approaching, they would stay clear of it. But other than that, they were regular merchants. They began by spotting small fishing vessels along the Land of Lightning's southern coastline, and would then follow these ships to the ports where they would trade and ask for news. They never stood for too long in a single place, and would instead be constantly alternating between the Land of Lightning's ports and Kirigakure no Sato's ports. They would trade in small volumes to keep their ship light and fast. The income wasn't amazing, but it was enough to keep them fed and clothed.

And so, for four weeks, the Sea Bitch would make several trips between the two countries looking like a simple merchant ship with no deck guns and only a few small sails. It was an odd mission, the one this squad received. "To make small volume trades between Land of Water and Land of Lightning". But Akihiro's orders were rarely ever pointless.
Current date/time is Sat Oct 31, 2020 9:03 am