D-ranks! On the Job Learning

D-ranks! On the Job Learning

Here was the gate of Konoha. Well, part of it. Gennin didn't get the cushy position of guarding the min spot- no Hibiki liked to make them walk the perimeter of the gate itself. All the way around Konoha, for 6 hours. That was their shift. All the while, he enjoyed talking about the history of the gate, how many people died on the gate, how many invasions it had stopped, etc. He was a boring man, but Ryoku didn't mind listening to him drone on and on. It was comforting, honestly. He could walk and listen with a smile, asking questions quietly here and there. Hibiki might have an inflated sense of self image, but the gennin found the older ninja easy to get along with. He didn't ask for too much ,after all.

Six hours passed slowly but surely, and Ryoku left for the day. He would turn in his mission report of an accomplished D-rank mission. He thought that perhaps he'd be back tomorrow. Gate duty was relaxing. He felt he needed a break anyway.
_________________

The next day, Ryoku accepted the same mission he took yesterday. He'd be guarding the gate with Hibiki again. As he came up to the towering object, the older man squinted at him. "Back again, Higurashi? Eh, I'll put you to work. You'll be joining me on circling the gate again. Northwest of the gate, when we reach it, I'll have you cut back some overgrowth that's getting too close. We don't want anyone just jumping up to the gate from a tree, after all."

"Of course," Ryoku replied easily. And so on they went, walking east around the giant gate surrounding Konoha. It took them an hour to reach the NorthWest side, but when they arrived, Hibiki handed the gennin a hatchet and had him get to work. It took Ryoku another hour to cut back enough greenery for the Chuunin to be satisfied, and they continued their circumnavigation. Luckily, it was another uneventful day.

Eventually, Ryoku left to the mission office, and turned in his second D-rank. It was another successful day, and Ryoku went home feeling satisfied.
_________________

Once more Ryoku returned to the wall. This time, Hibiki was ready for him. "Alright young man, today you're going learn to write incident reports for the wall. Come with me." And they both headed into a building next to the gate. "You'll have to write by hand the reports these gate guard ninja tell you verbatim. Get to it."

And so he did. Ryoku wrote until his hands cramped up, and then kept on. This was no hardship for him, being used to writing fuinjutsu. His handwriting was impeccable, and Hibiki was impressed with his paperwork skills. Indeed, Ryoku made for a very good paper pusher. This went on for a few hours, before they did another few laps around Konoha's gate. Then, once again, they were done.

Ryoku returned to the mission office, wrote his report, and turned it in. These last three days had been pretty relaxing, and he didn't mind doing this again sometime.
_________________ 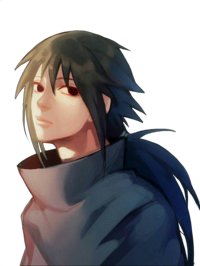 Here it was! Akihiro's very first mission as ninja in Konohagakure no Sato! How exciting! But what was he going to do? Fight bandits? Defend the village from imminent danger?! No, perhaps something less dangerous. They wouldn't give that to Genin ninjas, would they? Well, he now found himself hoping they wouldn't- after all his abilities weren't all that great. It wouldn't be a fitting end for him to die to a few bandits on his very first mission...

Alas, the mission assigned to him as guard duty at the gates. He was a bit disappointed, to be fair. Not because the mission wasn't dangerous, but because the only thing that it required him was form the Sparrow to stay still and pay attention. And he had been doing that for *years* at the academy. Really, this was starting to look like more of the same.

Even so, he went out to complete his missions. Leaving the Hokage Building perimeter, the young Uchiha ran across the village to make sure he would get there on time.
_________________
Character Updates
Uchiha Akihiro

He did get there on time. Not that it was easy! Akihiro passed by a shinobi tool shop and was seriously tempted to stay there a bit longer and do some window shopping. He didn't have any spare money to spend, however. That was why he was on a mission! This reminder was really what got him off his feet and running towards the gates again.

He reached them in (almost) record time. Once he got there, Akihiro got himself doing all sorts of things. Turns out, standing by the gate looking at those who pass through wasn't nearly as boring as he thought. True, most of the time people passing by were pretty normal, but one sketchy old man had been trying to sneak in contraband into the village! Oysters! He was going to sell oysters without paying a single ryo in taxes! What a bandit! Perhaps not the bandits Akihiro imagined himself stopping on his job as a Genin, but it was something. Other than that, not a whole lot more happened. He found himself inspecting the structural integrity of the gate, making sure the wood was well taken care of. He found himself writing what his seniors told him to write on the gate entry registry, and even walking a bit along the walls near the gate. It wasn't a difficult job, but it was an important one and so Akihiro didn't really mind doing it.
_________________
Character Updates
Uchiha Akihiro

By the time hi shift was ending, the sun was setting. Akihiro had started roughly at 2:30 pm, lasting six hours which meant that right now it was about 8:30 pm of a summer day and the sun was setting over the forest beyond the gates. For some reason, the end of the shift was the time at which the most exciting event in the whole mission happened. A merchant arrived at the gate, bringing a wagon and several horses behind him. Around the wagon, there were several armed men, large and bulky, most of them on horses. Akihiro could only assume they were hired guards, but judging from their positioning they were no ninjas, only armed men hired to protect the convo. Akihiro really didn't know how they managed to survive the trip...commonmen were usually no threat even for the weakest of ninjas.

The excitement arose from the fact that this merchant was trying to enter the village without paying the necessary taxes for entering the village with the wagon and sell his goods. With a quick glance, Akihiro determined they were trying to intimidate the guardsman with numbers alone since they outnumbered the guard team about one to one. The guardsmen weren't really that intimidated, but a fighting scene at the gate was too be avoided since it would likely hurt or scare common civilians. It was then that Akihiro had an idea...the Bunshin no jutsu!

He approached the gate, made a quick seal and created a bunch of false clones. This technically classified as Ninjutsu, even tho it was an illusion. Noticing the quick growth in numbers, the armed men hesitated. The clones were only illusions but they had no way of knowing that. By the time he approached them, they were already well on their way to pay the tax, despite the merchant's frustration.

After that incident, Akihiro considered his shift to be officially over and went home for a rest. It'd been a good day.