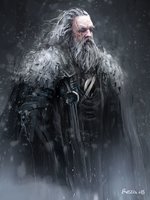 (Totally forgot we had to post in subforums now for long travel, already waited the requisite hours so I'm just gonna post these up real quick to not delay the summit any longer)

Nikuyo arrived at the Land of Fire's docks, having gotten back on the boat about twenty kilometers ago. His hair was still damp from the ocean and the humid air on the open water. He was dressed as usual, long black shirt with a flak jacket over it. The shirt was tucked into black pants held up by a black sash, with the bottoms of the pant legs tucked into close toed boots that went halfway up his calf. He didn't like rolling ankles in a fight, and sandals did just that if you weren't careful.

Their ship docked, everybody checked in and had their identities confirmed. Nobody said anything to Nikuyo for some strange reason. Perhaps it was the way he looked at everybody there, as if they were just sacks of meat he wanted to practice on. It wasn't far from the truth, honestly, and he was sure that the Leaf's shinobi could die just as easily as the ones he had taken out a couple years ago in his own village. Not everybody was special, after all. All musing aside though, the trio took off for the Land of Iron with an escort of Leaf shinobi that stayed well ahead of the Kirigakure shinobi while keeping one well behind them. Nikuyo just gave off that kind of vibe, it seemed.