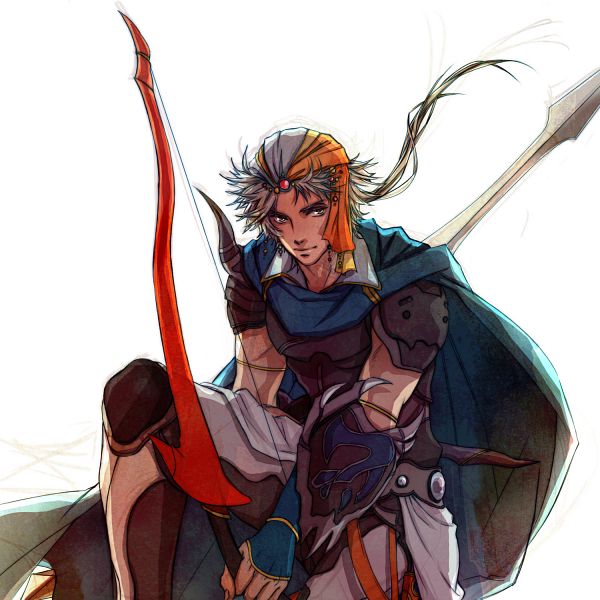 Standing at 5'11" and weighing at around 160 lbs, Tak is reasonably well looking and built for his age. He has fair skin, sliver hair, and brown eyes, however it's his preferred outfit that stands out. He often puts his hair in a ponytail underneath a bandana of blue, orange, and yellow. His clothes and armor share the same color scheme as his bandana, usually leaning towards blue with orange and yellow accents, though he is not against other colors. He often also likes to war a detachable cape of blue coloration.

History: Born in an obscure area of the Statelands on the Crimson State Isle, Taek had a relatively normal upbringing. His family was caring, his friends were plenteful, nothing really stood out for him. However, when the Ninja War struck he was introduced properly to what war could do. Up until this point he had been training to become a hunter, learning how to use tools and weapons of various kinds as well as honing his body to fight. However his first introduction to a ninja was brutal, as while he was hunting a deer a shinobi had attacked him, and without thinking used the body flicker technique to avoid the attack. He eventually took down the attacker, and seeing that the man was a scout, within a few days made a pilgrimage to the Crimson City itself to help defend his country.

When he arrived though, he was aghast. The Crimson City's military had shinobi as well. They weren't quite the same, but it was enough to put him on edge. Had the invading shinobi taken over? Had then already been around and the only just tried to expand? There were too many questions, but Taek knew what he had to do. He'd infiltrate the Military, find allies, and reclaim the Isle back for it's people.

Personality: Firion is a country child at heart, believing that it is best that he makes friends when possible and that even the weakest link can be used to strengthen a team. He find Tak to be more pleasing to his ears then Taek, and finds the names of others that are not from the Crimson State Isle to be strange. While he does not hate shinobi, he does not exactly trust them, believing that the Ninjutsu they use to be rather strange and alien. In fact, he believes that it is closer to an infectious power as he hadn't known of it's existence until he encountered the shinobi. While the Crimson City Military has tried to make it clear this isn't the case, they have given up on it and tried instead to show him how to properly use it instead.