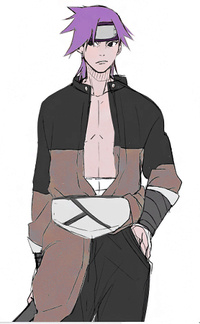 A bead of sweat rolled down Ren's forhead, falling to the ground below leaving a watermark as the dirt absorbed it. After his most recent loss to this so called Sora, Ren would have to set his mind in overdrive to avoid such a loss from every happening again. There were a handful of useful jutsu that Ren had been working on lately and all he needed was this bump of motivation to finally master them. He needed to stop relying on his magnet release to accomplish everything. It was taxing and took an incredible amount of concentration to articulate the polarities smoothly. Ren figured he needed to focus more on the offense of the basics. He needed some jutsu to counter fast ninja like Sora who clearly found Ren's blindspots with ease.

It was not often that Ren let anger take over his body, but he did, it was a sight to be seen. He had a vast potential in himself and it seems anger was the key to breaking his limiters. It wasn't pleasant for the casual and laid back Ren but nothing angered him more than losing or being shown up. He was too prideful in his skills and his dedication to training them. His brows tilted and eyes squinted. "Gaahhh." Let out Ren in a surprising roar of aggression. With a forceful pulse of his legs, Ren leapt forward and began sprinting across the field. He leapt to the air and an intense speed as his hands met and formed a line of seals ending with his hands held in the snake symbol. He opened his mouth and took in a deep breathe, flying through the air only forced more air into his lungs. Ren held his hands tight in the snake symbol upon landing and sliding at a still rapid pace. His anger was piqued, letting it out with the massive breathe of air he had stored in his lungs, now imbued with a furious chakra. The breathe let out was like a small storm, a force of nature. The trees before Ren were torn from the earth, roots and all. The torrents of wind were so intense it sent debris flying everywhere and cut a near cylindrical shape through the dense forest for 40 meters. Ren stuff huffing, his hands finally releasing the snake seal and going limp by his sides. "Damn that felt good." Ren let out to himself. There weren't many better outlets for anger. The damage that stood behind Ren was devastating. He looked to it as his goofy smile returned and his anger simmered off. "Shit. I hope no one cares." Ren kicked a rock before slipping his hands into his pockets and scuttling off to a different part of the field.


Ren had taken a quick break after punching a hole in mother nature. It was no time to lay in satisfaction and end training. His eyes tracked a sparrow that glided through the trees with ease before perching and flicking a gaze at Ren. The silence and beauty of being alone was Ren's favorite. He quickly snapped out of the gaze and began swinging his arms like windmills. "Next!" This next jutsu was a branch off of the jutsu Ren had just unleashed. Drilling Air Bullet. It would help Ren stay offensive while at a distance to keep his enemies on their toes. The Fuuton element in it's own was a very fast chakra. Perfect. This would be easy.

No seals required. Ren leapt up to a tree branch overhead and perched there for a moment. His eyes analyzed his surrounding before he took in a quick and concise deep breathe. With a quick swivel of the neck, Ren aimed his gaze at the top of a nearby tree. His mouth opened wide and he shot the gust of air from his lungs at a near blinding speed.  A small compressed ball of fuuton chakra ripped through the thick canopy of trees before beheading the top of the target tree. "I get it. It's all in the breathing." Said Ren to himself, trying to train himself and do everything under his own power. Another big gasp of air broke the forrest silence. With a powerful exhale, Ren shot another powerful ball of Fuuton chakra ripping through plant material and wood like butter. Ren grinned before letting out a cough. The technique strained his lung and throat because of his minimal use of it. It would be a very useful ranged jutsu for his arsenal.

As the day slowly chugged along and the suns arc almost completed, Ren was still hard at work. His head  was drenched to his toes in sweat as he stood shirtless now before a large and thick tree that was scarred with fresh slash marks all across it. It looked like it would be named mother tree or something. A large Fuuma Shuriken was wrapped in his right hand with a firm and determined grip. "Come on man.." This was going to be the one... With a seriously squint in his eyes, Ren hurled the fuuma shuriken, ripped his arm towards the tree and flinging the large hunk of metal at a buzzing speed. His hands went into a chain of three seals before ending in a clap. The shuriken was suddenly engulfed in a cloud of smoke before a monstrous fuuma shuriken emerged, slicing the cloud in two and generating a terrifying weed whacker sound. As it came into contact with the burly tree, the weight and momentum of the heavy blades sliced through completely and cleanly  sticking hard into a tree behind it. The thud rattle the over head canopy and sent birds running for their lives as they flew to the clouds. A large poof of cloud enshrouded the shuriken once more at it returned to its normal size, still embedded deep in the tree. "Ah HAH!" Ren shouted out in excitement as if to prove himself wrong. Just one last Jutsu for the day... then I can relax.


As the sun began to settle itself behind the horizon, the golden hour was upon Ren. The lighting was perfect and smooth, casting an orange glowing tint over the field. The day was almost over... almost. Not until Ren mastered a very useful defensive doton technique. Doton was the element that came most natural to Ren and he was beginning to become very fluid with the Doton chakra control and quite literally feeling the earth and the essence of nature. He didn't waste any time. His body was near its limit, covered in scratches and scuffs. He was nearing a brick wall. It was not or never. With a memorized chain of seals, Ren's knees bent and his palms slammed to the earth before him. "Gyaahhh!" Let out Ren in a roar of emotion. Nothing happened. Then suddenly the ground rumbled and before him shot up a 10'x10' wall of earth. It was compact enough to serve as a temporary defense but there was much to improve. Ren was just glad to see the wall that stood tall and solid. He stood up, his back cracking as his reach its full height. With a hard punch, Ren's fist landed firmly into the thick dirt wall with a solid thud. The wall was going nowhere. He let out a smile of satisfaction. The day could be over. Training was over... until tomorrow.

Wind Release: Drilling Air Bullet:
Name: Wind Release: Drilling Air Bullet
Rank: C
Activation Cost: 5
Range: 0 - 100 m.
Speed: B+
Element: Wind
Skill: Ninjutsu
Classification: N/A
Requirements: N/A
Parent Technique: N/A
Hand Seals: -
Description: To use this technique the user will first take a deep breath, and then exhale to shoot a highly compressed air ball from its mouth. This bullet can be as large as the amount of air the user can store in their lungs.
Weaknesses: N/A

Ninja Art: Shuriken Giant Body Technique:
Name: Ninja Art: Shuriken Giant Body Technique
Rank: C
Power: C
Activation Cost: 5
Range: 15m
Speed: Instant
Element: None
Skill: Ninjutsu
Classification: Open
Requirements: None
Parent Technique: None
Hand Seals: Tiger->Rabbit->Dog
Description: This technique is used to instantly increase the size of a projectile by up to ten times, greatly increasing the damage potential and the overall force of the object. Typically, this technique is used with Fuuma Shuriken, as their already large size easily increases the jutsu's potential. Interestingly, while the size and weight of the weapon multiplies, the momentum does not slow, moving with the same force and speed as initially thrown, but with much greater destructive capability.
Weaknesses: If the projectile isn't moving, this technique won't do much good, unless the user is capable of lifting the increased weight. The indicated range is the limit on how far a projectile can be from the user to activate this technique, while the actual distance that can be traveled by the projectile is determined by the stats of the user.

Earth Release: Earth Shore Return:
Name: Earth Release: Earth Shore Return
Rank: C
Power: C
Activation Cost: 5
Upkeep Cost: -
Range: -
Speed: N/A
Element: Earth
Skill: Ninjutsu
Classification: N/A
Requirements: Preexisting Earth
Parent Technique: N/A
Hand Seals: Ox | Hare | Dragon | Palms on Earth
Description: After striking the ground with their hands the user creates a large wall of earth in front of them. The defense is not perfect though, since a hard or drilling impact, such as the Spiked Human Bullet Tank technique, can puncture the wall. Also, since this technique only guards against frontal attacks, the enemy can easily attack from the side or even from above.
Weaknesses: N/A