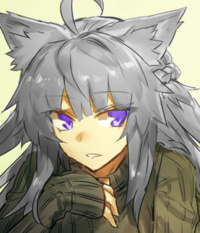 She finally arrived. The three of them. Ikomiki was flanked by both her Paths of Pain, and all three of them would be cloaked upon the first sign of the village. Together with the Hiding in Camouflage Technique and the Silent Killing Technique it would be impossible to find them by anyone but the most skilled sensor. Numagakure was here- She was sure of it. The walls made it obvious, of course. It was the only settlement worth a damn in the Black Marshlands of the Land of Swamps. It was located mostly in the east of the country, near the border with the Land of Demons. Likely it was a first line of defense against any potential supernatural invasion by the country. It was utterly surrounded by barren wastelands and dead, dark forests and mires. The smell itself was awful, and the amount of insects that buzzed around had increased tenfold. Ikomiki was ready to be done with this all.

The three of them would scale the walls, and then the moment they were inside the village they would all spread out. It wasn’t anything like Konohagakure, or even Kirigakure. Much smaller, a true ‘village’ in comparison, it shouldn’t be hard for her to achieve her goals. With the shared vision the three of them would split out, and quickly through scouting she would identify her goals. There were thirty shinobi in the village exactly, and the location of the village’s leadership and exclusive scrolls would be similarly identified through some stealthy sneaking and scouting around. After that it was just to manage executing her plan.

One after another the shinobi would fall, their throats silently slit. After being killed they would be dragged away so the bodies wouldn’t be discovered, brought all to the same location within the village- A deserted alley where nobody was likely to go, and then they would all be shoved into the same dumpster. The scrolls would be one of the first things she stole, and after that it was just a methodological throat slitting contest. There were three of her and thirty shinobi, which left them ten each. Easy work, considering the slaughter she had achieved at the Moonspire. Eventually she would manage to complete her work, only an hour or so after she arrived. The sun was setting, and the village would be covered in darkness once again. Perhaps some villagers would begin to notice the absence of all their shinobi, but there hadn’t been any signs of struggle, or any witnesses to her violence. She had made sure of that. Four of the shinobi's bodies had already been turned into paths, leaving only twenty six in the dumpster.

Akihiro would be summoned the moment she finished, and the three of them would release their invisibility in the alley. The scroll she had collected, which she had already read the contents of, would be offered forward to Akihiro as he appeared. The ability to read that he had beamed into her mind happened to come in handy here.

“I completed the task you gave me. No witnesses, and no killing of civilians. There were thirty shinobi in this village, and they were the only things I killed. Other than a few mosquitos. All their bodies are in the dumpster beside you, besides four I turned into paths. I'd like to save the rest of them for later, if possible, and bring them all with us back to wherever we're going after this. I also found this scroll in the village’s administration building. It's apparently some secret technique they were working on. Something about reviving the dead?”

Akihiro was surprised to listen to Ikomiki's summon so soon, but then again things became a lot easier with the aid of the Six Paths of the Rinnegan. Even if Ikomiki had only used two to help her with this task, the shared vision made it so that the three of them could act in perfect synchrony. It was a tad bit scare, really. But the village hidden in the swamps never stood a chance. He was glad to be summoned to a still relatively quiet and undisturbed village too: It meant Ikomiki had done her job well and would now be waiting for him in the quiet of the night.

The first thing Akihiro did when he arrived was cover his nose. The stench in the village was just awful...or was it the twenty six corpses she had stashed in a dumpster? How was even supposed to seal that many bodies?! Ikomiki had said she wanted corpses, but twenty six? Really? Akihiro blinked twice. He didn't expect to have to use half his chakra reserves just to store corpses tonight. The young Uchiha let out a discrete sigh. "Aaah well, you did good. You did very good, Iko." She really had.

"A technique that revives the dead huh?" Akihiro raised an eyebrow. Now that peeked his interest. But it couldn't have possibly been the same technique that brought back Satomi...could it? Nah, probably not. This was the land of swamps after all, nothing more than a minor nation. "Well, we can keep this for now." He'd say, taking the scroll offered to him and storing it in his cloak. "Let's take care of business then...please have your paths line up the bodies so it'll be easier for me to seal them. And keep watch, we don't want to be interrupted." He didn't mind sealing the bodies since he'd already promised that, but Akihiro didn't exactly have the physical strength required to take 26 bodies out of a dumpster.

Then and assuming Ikomiki did as he asked... one by one, he'd seal every corpse in a large scroll he produced with the Lightnign Flash blade creation technique. "Well, you've got enough spares for a lifetime now... shall we go then? There's something I need to do at Kirigakure." he'd say, placing his hand on an alley wall and leaving a discrete Flying Thunder God formula there.

He'd offer her his arm, and then teleport them both out of there and to Kirigakure no Sato's hospital.

She would nod, pleased with herself. Even if Akihiro was sighing, she got nearly everything she wanted here. Ikomiki had done this job exactly how Akihiro had told her to, and she managed to get a massive stockpile of corpses for the ready while also completing her current six bodies. That meant she would always have backup if she needed it. Plus the secret technique she had found was icing on the cake. It would hopefully be good, but there was no way to tell just by looking at it. She would have the paths line up the corpses for Aki to seal, one after another. With twenty six she would never need to be looking for corpses again. Of course, it was a shame to just leave this village after essentially taking it over, but if that was what had to be done then there was no helping it. She kept watch the entire time just to make sure there would be no witnesses, and of course there weren’t any. Once the time would come she would take his arm, and the two of them would teleport out. The moment they got back to Kirigakure she would summon her paths as well, just to make sure they came along.