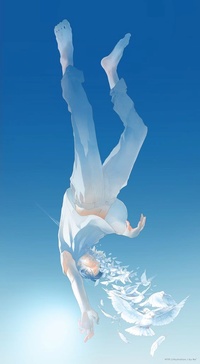 Doctor Nameda chewed the end of her pen as she watched from the safety of the partition. It had been six weeks now since the Orthodox Church had arrived in the dead of night, carrying this boy on a stretcher. Six long weeks since the Woman in Red had appeared, and brought Kumogakure's Black Ops into the wing. The boy was the victim of a gruesome, fiery accident. Nameda had seen many of them in her career.

Shinobi entered the hospital in various states of injury. The lucky ones had been paired with a member of the Medical Corps for their mission. Many were not so lucky. Trained Medical-Nin were hard to come by, it was an area that demanded years of intensive training, delicate chakra-control, and most importantly, the ability to keep their wits about them and fight back when needed. So many unfortunate souls believed their three-man squad would muscle through a mission, and escape unscathed like the mangaka heroes. This boy however, this was caused by no mission.

She crossed her arms over her chest, drawing her labcoat tighter around her as he writhed against his restraints. A Medic was attempting to approach with an outstretched open hand, and a syringe hidden at the side. She pursed her lips, and leaned forward, pressing the button for the microphone.

"Hansung," She warned over the speaker. "This one spits Lightning. Even if he can't make hand-signs." And released the button.

In the world of Shinobi, psychiatry came with its own hazards. A bout of madness, and wild hallucinations could spark the mind into a frenzy. She'd taken precautions of course, and soent the last several weeks documenting every technique this patient's mind threw at them. His use of Lightning was prolific to say the least. On a tuesday, after a morphine drip, he spat a "Wave of Inspiration" towards the ceiling, and tried to force a current through the wall for a makeshift "Rock Avalanche"; both techniques failed to start fires or cause destruction.

"Thunderclap Drill" was discovered when restraints had torn.

For safety, in the Hidden Cloud, with its military dominated by Lightning experts, she assumed all of them had the capacity for the fabled "Four Pillar Bind". The more she learned about her patients, the more Nameda had taken to assuming the worst about their battlefield prowess. Chakra, Doctor Aruna Hyuuga said, could be analogous to language. The more fluent one became with it, the more easily techniques rolled off the brain. With greater fluency came proficiency; fewer handsigns, less wasted movement. When it came to those with damage psyche, such as this one, Nameda checked off "Shadow Clone", "Hiding in Shadows", "Perfect Copy",  and "Transparent Escape". She'd seen one too many ANBU in the field exercise the "Body Elimination" technique, and the infamous "Genjutsu Kai" had become all too ubiquitous among young Shinobi hoping to ward off illusions. All of these could aid some of sound mind quite well in a daring escape. It took field experience to detect a Shadow Clone, or watch the dark for a hidden attacker.

Over the course of six weeks, she'd done her due diligence to protect herself and her staff, collecting all of the available information she could. Chakra was like a muscle, the more it was used the stronger it became, but here and there, she found irregularities. Blood panels clearly displayed the hallmarks of a Bloodline Limit, his cells were primed for conducting Lightning Release, more-so than the average Kumogakure Shinobi. Yet these cells were tinged with spiritual energy of another sort, and although she'd poured over the charts, she couldn't suss out their secrets yet. Energy was eaten, and energy was expelled by his body, like a battery, and yet the energy was always of a different variety. Something inside him, even now, was shunting it away and drawing it from an undetermined source. She saw it too in his mitochondria; amassing chemical energy for their cells at whim.

Nameda took her pen and ran down the charts once more, all while her patient thrashed and writhed. She'd learned to drown out his screaming at this point. It was always the same, yelling and seething about how someone had taken his skin. Well of course his skin was gone, they both knew that; third-degree burns were difficult to treat even with skin grafts and Medical Ninjutsu.

Sometimes she'd stroll past on the evening shift to catch him unawares. The low-lighting and darkened halls played tricks on the eyes. Only the sounds of ventilators, capacitors and electronics filled the hospital, and frankly she found it peaceful.

She'd stand in the hallway, when the lights were dimmed, watching his monitors pulse. It was the only time he ever appeared peaceful. Yet even on those nights, she could've sworn the shadows themselves grew restless in his presence-- a trick of the eye she told herself. On those nights she found her thoughts growing dark, calculating his odds of survival and rehabilitation. She wondered how long his mind would sustain itself, how long until his kidneys and liver scarred themselves, if he could ever truly be released from the mental ward. Nameda would sip her coffee, take her notes, hope for any improvements, and exhaustedly, head to the next room. Then at eight weeks, the screaming stopped.

She found his silence deafening.

Was he catatonic? Slipped into a coma? For eight weeks he'd scarcely slept, thrashing wildly at anyone near him. For eight weeks food had been administered through tubes, his waste removed just the same. Long mechanical arms had served to treat his injuries and remove necrotic tissue, administer medications and change his wounds.

Carefully, she'd slid open the door to his room and stepped inside. Quietly setting the clipboard on the countertop, she grabbed a swivel chair and wheeled it around. Her dark eyes worked quickly, looking for dilated pupils, crust on the lips, sub-dermal hemorrhaging, or anything leaking from the ears. She'd seen that too-- from the Land of Grass weaponizing Cordyceps fungi-- when the brain liquefies slowly. She raised her hand and snapped her fingers, sparking a brilliant light into his eyes.

"Kojin can you hear me?"

"Kojin, can you hear me?" Nameda repeated, a bit louder. She'd long suspected that in the accident at the Training Grounds, the pressure-wave and heat from the blast had destroyed the boy's ear drums. It was these precious lucid moments when he froze and stared, that she wondered what his world was like. Was he waking from another fever dream, expecting it all to have been a hallucination? Did he see this existence now as a form of torture itself?

Nameda ran her eyes across his face, scouring the layers of bandages. Flecks here and there of blood and strange fluid, salt clung to the edges around his eyes. Pale yellow and chalk-white crusted his nose and mouth. Thrice now she seen his sutures tear in his wild thrashing, spilling blood and pus beneath the bandages. Flames had lashed his body, stripping layers of flesh, exposing veins, muscle and more. The scars he'd already suffered as a Shinobi were minor in comparison.

Gently, she pressed a stethoscope to his chest, popped the earpieces in. The blast had taken his lungs as well. Superheated air, sucked into the lungs on impact, had boiled the avioli sacs lining them, flayed the soft tissue inside. Her surgical team had done their best, applying complex Medical Ninjutsu and tissue grafts to spare the organs. Layer upon layer of Jutsu had sewed tissue together, resuscitated vital components, coaxed life into scorched bronchial tubes. His vocal cords were gone as well; mutilated by the blast furnace.

When Kojin had begun to scream, the sound was savage, hollow. A man forcing a voice into existence, a grating, awful sound that reminded her of crushed glass and sand. He was young too, barely sixteen, a time when hormones influenced the voice. It would never be the same. The surgical team had worked there too, supplying a vocalizer, intertwining a synthetic-skin layer with nanofiber prosthetics. They lined his burnt throat with synthetic tissues, used Medical Ninjutsu to weave it together, transform scorched remains into new cells, transfused blood into his own. Small sutures held pieces of him together now, inscribed with seals placed under microscopes. For a week he'd been intubated while a team worked around the clock in shifts, forcing his lungs to accept treatment and fill with air. All of it, to keep this husk of a man alive at the behest of the Hidden Cloud's ANBU division.

She listened to his breathing, it was strong yet hollow. She knew the lungs weren't truly his anymore. The air that flowed moved through manufactured corridors. Valves flipped here and there. When his chest filled with air, it was the sound of a forgery.

Nameda pulled away, and placed the stethoscope in her lap. Despite all their work, she knew that something was wrong; it lurked below the wounds, the sutures, and rehabilitated flesh. A steady drip of anesthetics had had served their role well, but his recovery was fast and accelerating. Even without their intervention, she'd seen it in motion: a thin band of fresh, pink tissue spidering here and there, blood clotting faster. Even in the timing of his body processing the drugs, how his organs functioned, was faster, stronger than before. She knew her handiwork well, recognized her signature in every beating heart.

"Something.....Its something...." She murmured, and thumbed through his charts. Her dark eyes searched the pages, following graph lines, percentages, medications. If it wasn't the Medical Ninjutsu, was it a drug reaction? An undocumented bloodline limit? She'd seen it before, with a woman who scarcely knew her heritage. However this... This defied her understanding of regeneration. It was fast, startlingly so, with ferocity. Cells clamored, climbed onto one another, conjoined, transformed and spread.

Nameda's eyes flicked to Kagase, who lay still on the bed, his body still. The steady beeping of the monitors relayed his pulse.

".... Why were the Jashinists in your room...." She said aloud. Religion was one thing, practicing your beliefs and praying to your God was a right all people of faith had a right to. However interfering with Medical teams was another issue altogether. Why were they so fixated on this boy, and why had the Woman in Red returned to his bedside night after night?