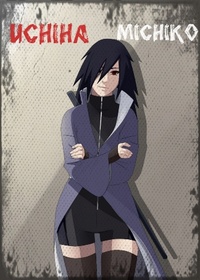 The young girl hopped quickly through the canopy of trees in the forest, having left Konohagakure behind her. She wasn't abandoning her village. She'd return. She loved Konoha very much. It was her home, and everything in her world! How could her Father turn his back on his homeland, his brother, his family....his daughter?! Michiko was a pure mess, running on fervent and primal instinct, the one of a child that needed to cling to their parent because of emotional trauma and fear. Fear of loss. She had never gotten to know her Mother before she was slain. Her Mother was hardly ever discussed (especially whenever Michiko was around). No Mother, a blind Uncle, and a Father who abused her by taking his frustrations out on her for her rebellious behavior. Even so, even with him being abusive now, Michiko remembered fondly the years before he'd gotten so bitter with his job and position. Before, he used to be so happy to come home to her and help her learn things, and now he seemed to hate everything. Even himself. Michiko needed to stop Tadashi and get through to him, that giving up was the wrong way to do things! She had hope in her little heart, and a great big fire of love and forgiveness. If only she could catch him. He was so fast.

Michiko was sweating, panting. She had to stop on a tree limb and catch her breath, her heart racing. Her Father wasn't stopping. At this rate, he'd be a hundred miles from Konoha and a real fugitive on the run. 'How selfish.', Michiko thought bitterly, her eyes phasing into the Sharingan out of her pent up anger coming out. It was so frustrating. She had heard many times, Uncle Ryudan arguing with Father late at night about how he couldn't beat himself up for Mother's death, and how he needed to leave the ANBU and help train his daughter and raise her so that she could become a Kunoichi. Uncle had told her Dad many things, but he never listened. He just got more and more angry every day, and he kept working, and shoved Michiko into a box (or that's how she felt). Now, her Dad was so sick of everything, he was running away.

"You're a coward, Father!! If you can hear me, you're a big fat coward, and a jerk, and you're a liar!!", she yelled. A huge flock of birds ran in fear of her yelling so loudly. She stood there on the huge tree branch, her clothing fluttering in the wind caused by the masses of black birds flying by. Some feathers dropped from their wings, drifting by her. To her, everything was in slow motion, with her Sharingan active. And everything was red. Tears streamed down her eyes gently.

"Go home, little brat! Forget me. I'm nothing to you anymore.", her Father's voice was projected to her mind. How could he contact her like this and not even be looking into her eyes?

Michiko froze. He was here. Her Father flickered out of thin air right in front of her, furious look on his face, his strangely marked Sharingan streaming blood down his cheeks. She couldn't move, she lost her breath, and she felt cold. So cold. 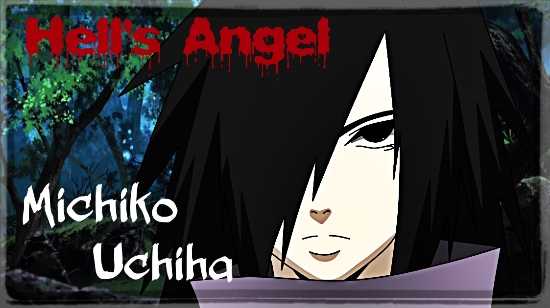