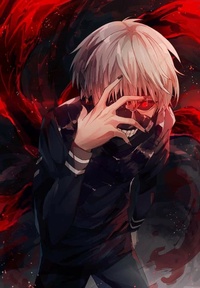 Base: None
Focused: Touch

Requirements: Sensory Skill
Description: The Sensing Technique is the basic method of Sensory that is automatically granted once the Sensory Skill is unlocked. Perception determines the potency of the user's ability, extending the range as listed above. The classic use of sensory is almost a passive ability, requiring only that the cost be paid to maintain awareness. There is also a focused variation through which the user can double the range by making physical contact with an object via the hands or fingers. Whichever object is touched is the medium for range extension, meaning that beyond the original range value, only things making contact with the medium can be detected. This medium is almost always the ground.

The medium doesn't need to be the ground, and while using the ability inside a building will transmit one's sensing across all walls, floors, ceilings, and the ground upon which the building stands, there are other structures which may not be tied to the ground. Using this inside a blimp or other aircraft, for example, will extend the user's range over the aircraft, up to the maximum range, which may well cover the entire aircraft. Given that an aircraft isn't making contact with anything, the user's sensory range will be limited to that aircraft.

Drawbacks: Focusing the range forces one to remain in place. Anything not making contact with the medium cannot be sensed with the extended range; this won't help them if they're within the base range, however, as they can still be sensed as normal. The Sensing Technique is not a passive process and will require activation; if the cost is not being paid, the technique is not active. This technique is also required as a prerequisite for most Sensory-related techniques and abilities, excluding only a certain few.

Name: Ghost Sight
Rank: D
Power: N/A
Activation Cost: 3
Upkeep Cost: 1
Range: Up to 500m
Speed: N/A
Element: N/A
Skill: Sensory
Classification: Secret Technique, Clan-Exclusive, Supplementary Technique
Requirements: Akayurei [Stage 1]
Parent Technique: N/A
Hand Seals: N/A
Description: The Ghost Sight allows one to project their vision through walls and across vast distances in a straight line. This allows them to spy on a target from far away. It's like conjuring a window to see through except that window is showing you something extremely far away.
Weaknesses:
Cannot see the chakra of those targeted by this Jutsu. Can only see, not hear whatever is happening far away. Can only project their vision forward. Cannot move while using this technique as they are focusing all their senses into their eyes (which are projecting far away). Cannot use the Chakra Ghost or Ghost Sense techniques while this is active. Cannot see what is happening to your own body while this is happening, as your own vision is projected far away.

Name: Chakra Ghost Technique
Rank: B
Power: N/A
Activation Cost: 10
Upkeep Cost: 5
Range: 100m (AoE)
Speed: N/A
Element: N/A
Skill: Genjutsu
Classification: Dojutsu, Secret Technique, Genjutsu (Indirect), Supplementary
Requirements: Requires Genjutsu Skill, Akayurei (Stage 2)
Parent Technique: N/A
Hand Seals: N/A
Description:
With their dōjutsu, a member of the Yurei Clan is able to conjure a genjutsu involving the creation of silhouettes or illusory beings as a means of distraction. The entities are so realistic that they even have their own chakra pathway system, which can fool not only the Sharingan, but even the "all-seeing" Byakugan. When one of these entities is attacked, it vanishes like a ghost and then reappears. These ghosts make it difficult to pinpoint the user of the technique, for they all possess the same chakra signature as the user. Because of this sensors are unable to distinguish which of them is the "real" person.

This technique can also become more effective when used in conjunction with techniques like the Hiding in Mist Technique.
Weaknesses:
Affects allies and enemies alike. Does not disrupt a person's normal vision or prevent them from activating their own Dojutsu techniques. It however makes it difficult for said people to locate the caster. Does not create Ghosts of allies signatures, providing no protection or hiding for them. Cannot use the Ghost Sight or Ghost Sense techniques while this is active. The Ghosts are not physical therefore cannot hurt or touch anyone who interacts with them. The user stands out among the ghosts, so they need to either hide or use an obscuring Jutsu like Hidden Mist to enhance their sneakiness.

Name: Ghost Sense
Rank: D
Power: N/A
Activation Cost: 3
Upkeep Cost: 1
Range: 30m
Speed: N/A
Element: N/A
Skill: Sensory
Classification: Dojutsu, Secret Technique
Requirements: Akayurei [Stage 2]
Parent Technique: Ghost Sight
Hand Seals: N/A
Description:
The Akayurei grants the user enhanced perception capabilities. Their ability to read into an opponent's soul or spirit gives them allows them to gain some subtle hints toward their thought processes. This allows one to gain a sort of mini-precognition to aid them in close combat (see this KKG's mechanics for more info, as it is meant for the Perception Boost and nothing else). It also however allows them to inspect a person's health bar so to speak. The Dojutsu can also see their life force and how close they are to death.
Weaknesses:
Does not gain the Perception Bonus without this technique making it a more costly boost to Perception than a Sharingan (while also inferior). Seeing a person's health does not aid them in saving a person if they don't have the means to do so.

Name: Chakra Suppression
Rank: D
Power: D
Activation Cost: N/A
Upkeep Cost: N/A
Range: Self
Speed: N/A
Element: N/A
Skill: Sensory
Classification: Open
Requirements: None
Parent Technique: Sensing Technique
Hand Seals: N/A
Description: This technique allows the user to suppress their or their allies' chakra to the point that it becomes completely undetectable. This makes it impossible for sensor type shinobi to track them via chakra. This technique is very useful in the sense of allowing the user to infiltrate the enemy's ranks undetected.
Weaknesses: The use of this technique is restricted to only those with the sensory skill. Also since the user is suppressing their chakra they may not use techniques except for C Rank Taijutsu and below.

Name: Genjutsu Kai
Rank: C
Power: Varies
Activation Cost: Varies
Upkeep Cost: N/A
Range: Self/Contact
Speed: Instant
Element: N/A
Skill: Ninjutsu
Classification: Open
Requirements: The user must know that they are in Genjutsu
Parent Technique: N/A
Hand Seals: Tiger
Description:  The user concentrates chakra into their brain to expel foreign chakra. The amount of chakra required for releasing from a Genjutsu depends on the rank of the Genjutsu being used (not the cost of the Genjutsu but its rank meaning its complexity).
Weaknesses: In the case of vertically stacked genjutsu, it can be used to release only one Genjutsu at a time.
Current date/time is Wed Oct 28, 2020 3:39 pm