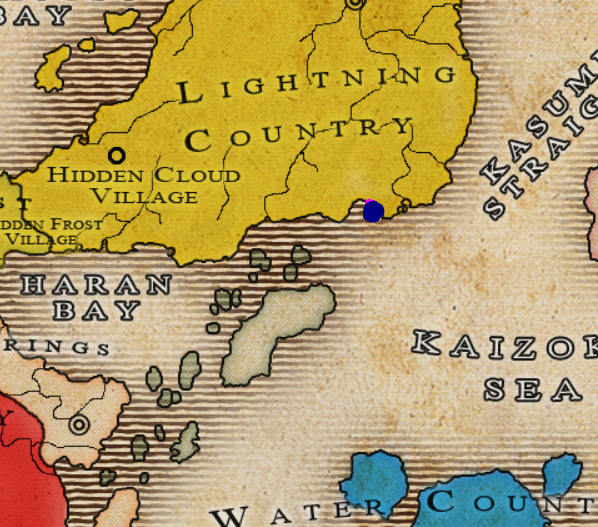 Ho Chi Mine is a small but active town located in the Land of Lightning (pictured above). They have an active iron mine, and very easy access to the sea. During times of peace, their primary buyer was actually Water Country, despite being located within the Land of Lightning, primarily due to the difficulty of shipping through the mountains. Kumogakure was, however, a close second, and Sky Country took a somewhat distant third.

Now, however, Kumogakure has fully taken over the port town and is transforming it into a fortress while blocking all iron exports to any foreign land. Being cut off from vital resources does not sit well with the leadership of Kirigakure, and they are looking to claim the town for themselves and reopen the supply line.

Mission Name: Tower Defense
Mission Rank: A
Theater of War: Ho Chi Mine's Iron Will (keep flowing)
Relevant Plot NPCs None (unless players request any)
Mission Goal: Kumogakure wants to prevent the seven in progress turrets from being destroyed. Kirigakure wants to completely destroy the seven turrets.
Description: Kumogakure has not yet finished building their defenses within and around the harbor. Kirigakure wants you to ruin their progress. The turrets are placed around the entire harbor, equidistant around the entire thing. Kumogakure wins if at least four turret sites are standing after the Kirigakure forces are forced to flee. Kirigakure wins if they manage to destroy at least four turret sites.

Turret sites can take four B Rank hits, three A Rank hits, two S rank hits, or one X rank hit. There are 250 meters between each turret site.
Payment: -
Maximum Number of Participants: Up to 4 participants, two from either side.

Mission Name: Flank Stakes
Mission Rank: S
Theater of War: Ho Chi Mine's Iron Will (keep flowing)
Relevant Plot NPCs None (unless players request it)
Mission Goal: Two Kirigakure ninja will maneuver around enemy lines, disabling traps along the way, in preparation for a flanking maneuver. The Kumogakure ninja must stop them.
Description: Kirigakure is sending you on a mission to read the back line. You have been given a route that will get you there. Unfortunately, a civilian network managed to decipher part of the communique. They know a part of the route, and have begun setting up booby traps along the way. They have also sent a messenger towards Ho Chi Mine proper to warn them of the attack. This messenger was able to inform one Kumogakure ninja on patrol, who is now rushing in to stop the flanking forces' forwards party, the two Kirigakure ninja.

Each trap can be defused by a crafter with a full round of work. If the crafter is disabled, each trap has a stat check to overcome it. The first three require a base of A rank Constitution, Coordination, and Perception (one each in that order) to overcome without a crafter to properly notice and disable them. The final trap requires S rank intelligence to bypass without the crafter.

Should a ninja not be able to make the stat check on a triggered trap, they will roll a d10 and the result determines their fate.

Mission Name: Fight in Mining Armor
Mission Rank: A
Theater of War: Ho Chi Mine's Iron Will (keep flowing)
Relevant Plot NPCs None (unless players request it)
Mission Goal: Win the confrontation
Description: Deep within the mountains of Ho Chi Mine lie miles of mines, going up and down, left and right. Two cornered Kirigakure ninja have fled into the mines. Two Kumogakure ninja have been tasked with finding them. Both sides without a map.

Defeat and restrain your opponents and wait for the civilian rescue team (which will occur after the end of the topic, and lead your out through a secondary exit tunnel outside of Ho Chi Mine).

Since Rin is absent and he never posted in the War Mission, I'll withdraw for now. Someone else can take his spot or another pair of people can compete in it if they like
_________________