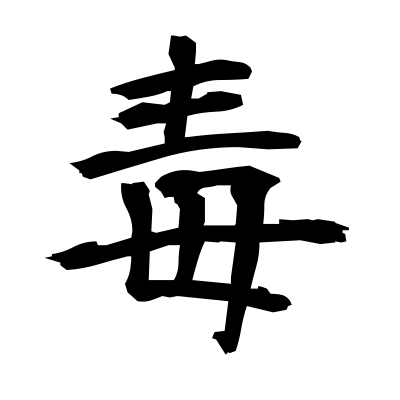 Clan History/Description:
The Doku clan was founded centuries ago by a group of ninja that specialize in the creation of poisons above all else. More out of sheer curiosity than any malice. However they often found themselves bottle-necked by the difficulty in procuring materials and the high cost of often doing so when seeking to make higher quality goods. Being ninja they sought ways around this and over the span of a couple decades figured out a new type of release and adapting many of the standard water jutsu techniques to it.

At first the Doku clan were loaded for their accomplishments by the lord of the time but after one of their poison was used to assassinate the lord from another region he grew more and more paranoid of them until finally he decided to preemptively strike to prevent the same fate befalling him.

That dark night that lord nearly succeeded in wiping out the clan, the few survivors scattering to the wind in order to avoid suffering further prosecution. Seeking to eradicate those that remained the Lord spread propaganda far and wide vilifying the clan. To this day members all but refuse to wear the clan symbol in public in fear of being crucified for their esoteric knowledge.


Clan/Bloodline Traits & Characteristics:
The Doku clan members do not have any serious striking characteristics however they tend to be attracted to the colour purple and it's odd when they aren't wearing at least one article of clothing in that shade.

Bloodline Description & Abilities:
Dokuton aka Poison Release is a special secret release that does not require a combination of chakra natures. It grants the wielder the ability to freely generate, control and manipulate Poison in many forms such as gas or liquid but never a solid. Note that this release only allows the user to generate poison that they have created or know how to create.

Only the Doku clan knows the secret to using the Dokuton but since it's not a genetic ability technically anyone could learn to use it if they are taught by a member of the Doku clan. Some key similarities of all the techniques from this release is the purple colour of the produced attacks, and the immunity to Dokuton based moves cast by the user. Note this only applies to the casters own moves and not to other poisons in general.

When casting a Dokuton jutsu that doesn't require preexisting poison the user must pick a poison they know that is either equal or lesser to the rank of the jutsu being cast. This poison picked will serve as the foundation the jutsu is comprised off. This means that you can't use an A rank Poison with a C-rank jutsu.

On the flip side if you use a lower ranked poison with a higher ranked jutsu the quality of the poison will be raised to match due to the extra chakra being put into it. This means a B-grade poison would become A-grade when used with an A-rank tech. Note this only changes the how effective the poison would work vs the target's constitution and nothing else. The symptoms, effect, countdown and duration all remain the same

When used with the Chakra flow technique it simply coats the weapon with a C-grade liquid poison.


Bloodline Limits & Drawbacks:
Clan members are required at minimum to know Iryōjutsu so they can know how to actually make the poison they will be using as well as how to counter it. While Chemistry is not required the clan's ability is severally hampered without it as the user will be restricted to producing B-grade and below poison.

As most of it's techniques where adapted from water it shares the same weakness to Earth based jutsu, but unlike water it's only neutral towards fire rather then being super effective. 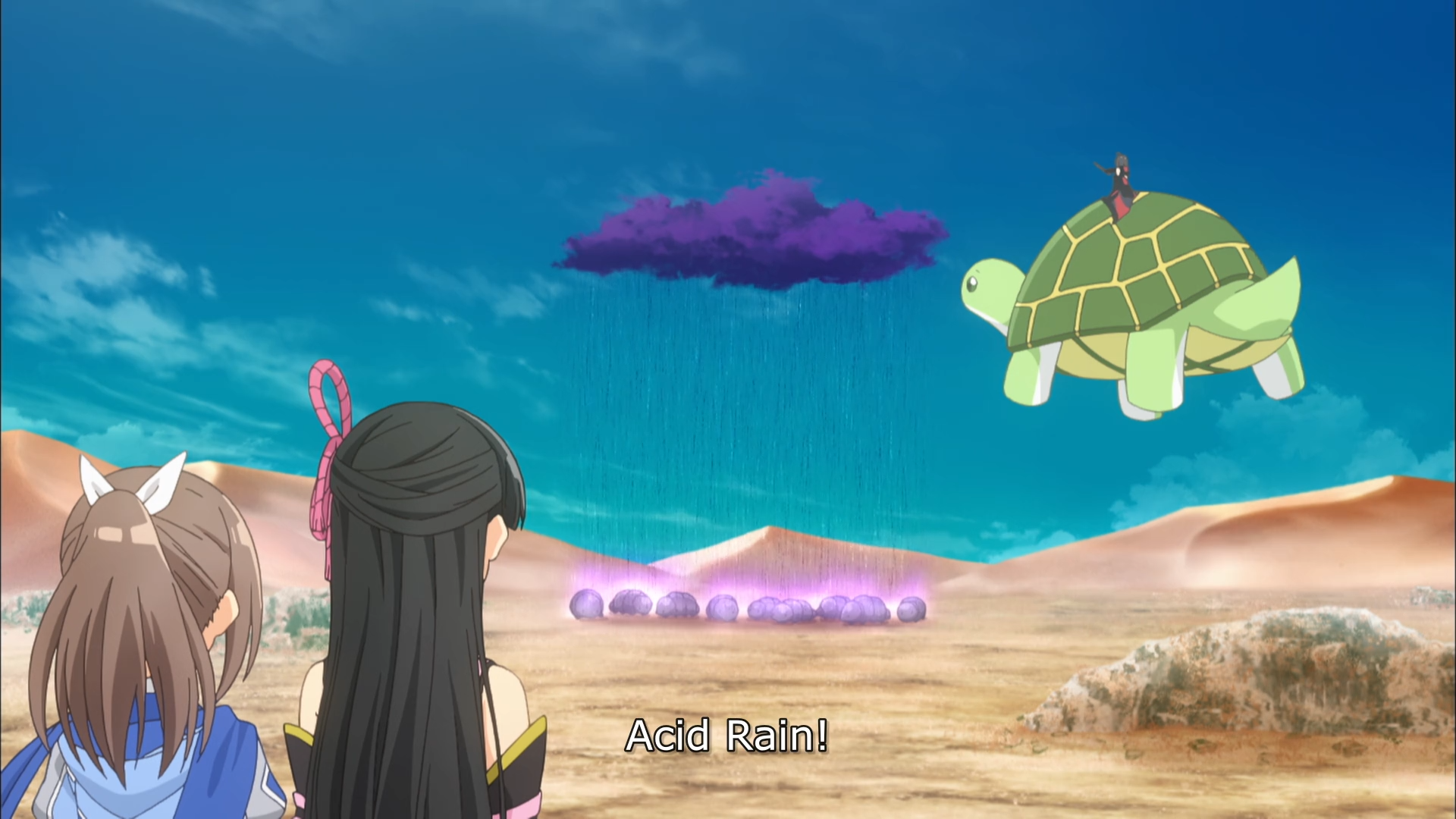 The user creates a large dark purple storm cloud high overhead that will cause a torrential downpour of liquid poison that will begin to saturate the area in every direction within range.

Weaknesses: The poison influences everyone caught in it including allies. In addition, if it where to colloid with another weather effect jutsu they will cancel each other out. 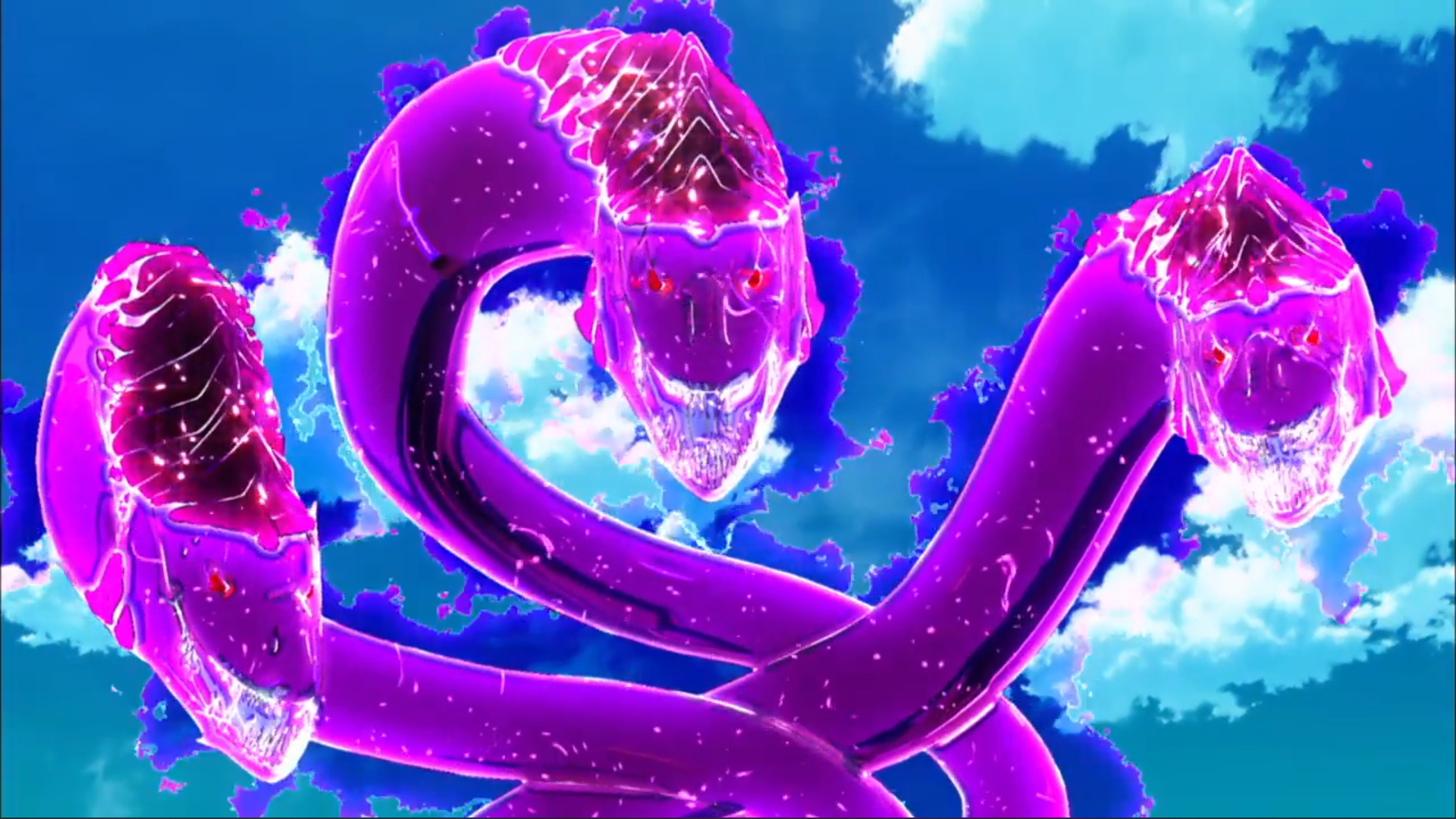 The user shapes a large amount of liquid poison into a giant powerful three dragon heads. Each head acts independently and can either hit the opponent with formidable might dealing great physical damage, bite with great crushing force or even constrict a target. The user can freely manipulate the dragon heads around the body of poison and even travel upon them as long as it stays within 200 m. of its control.

The heads can be used as a medium to cast Poison Release: Lethal Poison Breath by paying the cost of that Jutsu.

Drawbacks: Requires a large body of liquid poison to be used such as a small lake.

Drawbacks:
Because the poison is gaseous it can potentially be blown away or sealed.

Name: Poison Release: Poison Breath
Rank: A
Cost: 20
Range: 150 m.
Speed: B
Element: Poison
Skill: Ninjutsu
Classification: N/A
Requirement: N/A
Parent Technique: N/A
Handseals: Snake > Dragon > Snake
Description: The user spits out a great volume of poison gas from their mouth, swallowing up the enemy with the advancing surge.
Drawbacks: Because the poison is gaseous it can potentially be blown away or sealed.

B-rank:
Name: Thousand Flying Venom Needles of Doom
Rank: B
Cost: 10
Range: 10 m.
Speed: B
Element: Poison
Skill: Ninjutsu
Requirements:Preexisting Poison
Classification: N/A
Parent Technique: N/A
Handseals: Tiger
Description: By using a nearby poison source the user forms one-thousand needles made of liquid poison. Their density and structure are enhanced using chakra giving them a deeper penetration, being able to pierce five-millimeter thick steel (assumed C-grade quality.) The user creates a narrow escape route for themselves from which after they exit the user can safely trigger the technique mutilating whatever is left within.
Drawbacks: This is considered a close quarters technique, thus the need to lure the opponent within that range is necessary while managing to create hand seals.

Name: Poison Release: Venom Wave
Rank: B
Cost: 10
Range: 250 m.
Speed: B
Element: Poison
Skill: Ninjutsu
Classification: N/A
Requirement: N/A
Parent Technique: N/A
Handseals: Snake
Description: The user spits out a great volume of liquid poison from their mouth, swallowing up and crushing the enemy with the advancing surge. The user can ride the wave, allowing them to move at high speed, and attack the enemy, now swept off their feet, without fear of counter-attacks.
Drawbacks: N/A


Name: Poison Release: Venom Formation Wall
Rank: B
Cost: 10
Upkeep: 5
Range: 15 m.
Speed: B
Element: Poison
Skill: Ninjutsu
Classification: N/A
Requirements: N/A
Parent Technique: N/A
Handseals: Tiger > Snake > Rat > Snake > Tiger
Description: This defensive technique creates a wall of liquid poison around the user. Enemy attacks are completely intercepted by a fence of poison blown out from the mouth, and is raised from below with tremendous might. The poison is blown out in the form of a circle around the user, and it makes for a defense without openings. It is also possible for the user to control the amount of Poison and duration at will. It may also be used with an already preexisting source.
Drawbacks: N/A

C-rank:
Name: Poison Cloak armor
Rank: C
Power: -
Activation Cost: 5
Upkeep Cost: 3
Range: self
Speed: -
Element: Poison
Skill: Ninjutsu
Classification: N/A
Requirements: -
Parent Technique: -
Hand Seals: Snake > Dragon > Snake
Description:
After the user forms the handsigns they expell a small amount of chakra to form a coating of liquid poison over their torso (also over any armor they'd already be wearing). This will automatically poison whoever comes in contact with them. This also acts as a psychological tool as well, because an opponent will be wary to hit someone who they may think is covered in poison
Drawbacks: The user becomes more susceptible to Raiton based attacks while wearing this armor taking +1 addtional rank in damage from them

This technique can also be used collaboratively to increase its range and effect.

Name: Poison Release: Venom Shot
Rank: C
Cost: 5
Range: 80 m.
Speed: B
Element: Poison
Skill: Ninjutsu
Classification: N/A
Requirement: N/A
Parent Technique: N/A
Handseals: Tiger
Description: After kneading and converting their chakra into liquid poison, the user will shoot one or more condensed blasts of liquid poison at the target. The size is dependent on how much poison the user can store in their body. The technique can gain an additional + to its Speed when used aerially.
Drawbacks: N/A

Name: Poison Clone Technique
Rank: C
Cost: -
Range: 25 m.
Speed: -
Element: Poison
Skill: Ninjutsu
Classification: N/A
Requirement: N/A
Parent Technique: N/A
Handseals: Tiger
Description: By using liquid as a medium, the user can create one or more clones of themselves. While the clones can perform techniques, they only possess one-tenth of the user's chakra and cannot go too far from the original. The clones can also be used as medium to perform other Poison release techniques. When these clones are struck with a sufficient amount of force they will revert to their liquid poison form. The clones can be created anywhere within a 25 m. range of the user, unlike the Shadow Clone technique which requires clones to be created next to the user (such ranged spawning would require the clone to be spawned from a pre-existing source of liquid poison)
Drawbacks: When casting this technique the user's stamina must be above 30% in order to maintain control over his/her clones. In addition, the user must maintain general concentration to maintain their clone's presence. If at any time the user is inflicted with heavy damage in contrast with their Constitution all clones will be dispersed. The user must be within 25 m. of their clone.

Name: Poison Release: Venom Waterfall Technique
Rank: C
Cost: 5
Upkeep: 1
Range: -
Speed: -
Element: Poison
Skill: Ninjutsu
Classification: N/A
Requirement: N/A
Parent Technique: N/A
Handseals: Boar > Dog > Ram
Description: The technique is done by creating liquid poison through the earth and manipulating the current to form a waterfall. The scale of the waterfall is determined by the user and must be sustained by the user's chakra. The user must be within 50 meters of the waterfall to continue to feel it chakra. This technique requires very little focus allowing the user to perform other tasks without having to focus on feeding this one chakra.
Drawbacks: Must be created over soil. Concrete and other sealed surfaces will not allow the technique to function.

Name: Poison Release: Venom Whip
Rank: C
Cost: 5
Upkeep: 1
Range: 10 m.
Speed: -
Element: Poison
Skill: Ninjutsu
Classification: N/A
Requirement: N/A
Parent Technique: N/A
Handseals: Rat > Dog > Ox
Description: The user creates a whip made of liquid poison that can wrap around the opponent. The user can also channel lightning chakra to shock anyone wrapped in it. It can also be used like an ordinary whip to cause physical damage to an opponent.
Drawbacks: Opponents may also discharge lightning release through your whip damaging you as the user.

Name: Poison Release: Poison Creation
Rank: C
Power: E
Activation Cost: 5
Upkeep Cost: N/A
Range: 5 meters
Speed: D
Element: Poison
Skill: Ninjutsu
Classification: N/A
Requirements: N/A
Parent Technique: Venom Waterfall Technique
Hand Seals: Bird > Ox
Description:
The technique is simple for it only does one thing. By kneading the chakra on the hand the user touches the soil. By drawing toxins from with the ground this technique reveals liqud poison equivalent to 5x5 meters. It lacks firepower because the technique is meant to produce poison. The poison remain even when the chakra runs out.
Weaknesses:
Cannot work in concrete, iron, wood, etc. Can only function in sand or soil.