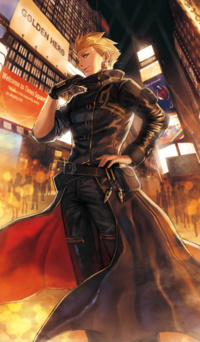 Mission Name: I cannot bear to see this!
Mission Type: Elimination
Mission Rank: B
Mission Goal: Clear out the bear infestation at Mr.Julian's cave.
Description: Mr. Julian is a famous biologist. For some reason, his cave is now filled with twenty bears. It seems he forgot a bear couple he left there for a few years and now they've gone insane, surviving from the provisions Mr.Julian stored there just in case a war broke out. Despite being animals, these bears have a tremendous physical might. Take care not to diiiie~ Village insurance doesn't cover loss of limbs by bear bite.
Payment: 25,000 ryo
Requirements: Jounin+


A cool wind blew across the desert sands as Kai waited at the front of the gates to the village. The wind heralded the oncoming night chill and he stood awaiting the man he was supposed to be on this mission with. Tall, broad shouldered, and muscular, Kai wore sunglasses, even in the darkness of the oncoming night to hide the colour of his eyes, a green as bright and vibrant as new grass. They always seemed to draw attention to him and he disliked that fact. So he took some measures to avoid it. Of course this didn’t work so well when you considered the fact that was was 6’3, had black hair clipped into a buzz cut, and wore black shinobi cargo pants, a green undershirt, and a green coat that went down to his knees. Black combat boots finished off the look and all of it made him stand out regardless. However it was only when people paid close attention to his eyes that he got uncomfortable.

The man he was waiting for was none other than his Sensei, Azuma Asakaze, Jounin of Sunagakure. He taught him his first lightning jutsu just a couple of days ago. Today they were to go on a mission to eliminate a den of bears in a cave out in the desert. From what Kai understood the cave was not close at all, and so they would have to be traveling for a time. Which was a perfect time for him to be practicing jutsu of different elements. All in all, he was somewhat excited to get going, or at least, about as excited as he got. He figured his sensei would be around soon and they could head out to begin the mission.
_________________
Character Name: Mal'Zeth Muramatsu
Spendable Experience: 0
Total Experience: 0
Renown: 0
Ryo: 25,000
Stats: 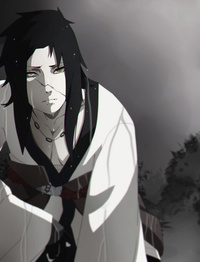 It must have been late evening, the sun was on its way to meet the horizon in the west and the cool night air was settling over the desert, relief from the heat of the day. Azuma was approaching the main gates of Sunagakure, the young Jounin appearing in a slightly different outfit then his normal attire--at least on the surface. He could be seen approaching the gates in a cloak akin to what an ANBU would wear, a deep charcoal in color. Under this cloak was his ‘normal’ outfit, the white Yukata--the black pants ending near his shins, shins wrapped in bandages down to his black shinobi boots. But seeing as this would potentially be a lengthy Mission, he wanted to be prepared for cold nights with the extra layer, as well as able to use it as a way to protect himself from the blistering sun.

The Desert Rogue approached the gates, mismatched hues falling upon Kai who appeared to have been waiting for him. The two tall men had a mission to complete, a cave had been left unattended by some biologist and the bears he had left behind had grown into fearsome beasts, in a fairly large number. Now it was up to Shinobi of Sunagakure to, by any means, evict these Bears from the cave. Azuma approached Kai and glanced over his rather imposing student. "You seem ready, hope you are. We got a fairly long walk to this cave so it’ll take some time. We should probably get going." Azuma said to Kai with a small nod, before continuing on to walk through the gates of Sunagakure, out towards the Sunrise Desert.
_________________

His sensei would arrive in short order, prompting Kai to look toward him as he approached. The man looked older than Kai, something the genin attributed to years of experience and hard time in the world of shinobi. A harrowing experience for many and something that would leave one changed, both physically and mentally. The shaded genin would nod in response to Azuma’s words, and shift his head to the side, bending his neck and causing tension cracks to sound before he spoke. “I am indeed Sensei. I hope to utilize the time we take to travel to the cave to practice jutsu of different elements. I figure the bears won’t leave in the time we take to travel, and even if they do, that just means mission accomplished regardless.” He would say, raising an inquisitive eyebrow at the man. The unspoken question was there, asking if it would be alright for him to do so. Should he object then Kai would obviously acquiesce, but he would also ask for why he couldn’t.

Not as a sign of disrespect or hard headedness, but simply a desire to understand. The sun was swiftly traveling toward the horizon, meaning it would get significantly colder soon, but he would be fine in his coat. His sensei was wearing a white yukata, of the same style he’d first met the man in, under a charcoal grey ANBU cloak. ‘Will he freeze before we finish the mission?’ He’d wonder to himself in speculation.

The Desert Rogue’s ears burned with the sound of Kai cracking his neck before he would respond to Azuma, expressing the desire to practice jutsu of numerous elements during their travel time. This honestly sounded like an amazing plan to Azuma, the young man nodding in response to it as Kai went on about the bears. The bears had been in the cave for some time, would be weird if they left right before Shinobi arrived to force their exit.

"Sounds like a good idea to me, I can obviously help you with Raiton jutsu--but the other elements I can only explain as I have been told about them. Feel free to ask me anything, but I apologize if I don’t have all the answers." Azuma said in response to Kai practicing more jutsu on the way to the location. Azuma would move to lead the two of them out of the Village, passing through a deep pass between the towering walls that surrounded the village on all sides. Azuma would nod to about the only guard he respected for doing their job right--the others lazily letting about anyone pass through the gates--as they walked by them, earning a short wave from the random gate guard towards the two, as the desert itself awaited them.
_________________