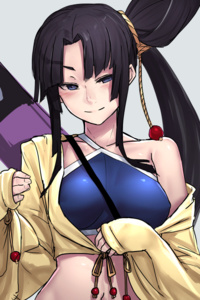 Mission Name: Gathering Herbs
Mission Type: Chore
Mission Rank: D
Mission Goal: Collect a basket of herbs
Description: One of the local owners of a herb shop have hurt themselves when they fell down some stairs. The owner would usually go out in the afternoon to pick herbs from the training fields, but because they can't walk they are looking to hire someone to do the job for them. Swing on by the shop to collect a basket and a book of herbs before heading off to the training fields. Return only once the basket is full.
Payment: 10,000 Ryo
Requirements: Genin +

Yoshitsune had taken this mission as a reprieve between the second part of the exams and the third, and final part. She had just barely passed, being allowed a spot in the finals due to fiat from the proctor. Apparently her performance was enough to impress the proctors and determine that between her and Tsuki that she deserved to pass more. It was a bit of a shame, since Tsuki was definitely talented, but with both of them each having a relic only one of them could pass. Now she was the one sent off to the finals, sent to battle against someone named Kye from her own village.

She would zoom around, running to collect as many herbs as she could. Each would be placed into her basket, and patted down as to not fall out as she continued to run. This was one of her applications of Swift Release, and let her zip and zoom pretty fast all over the place. She had collected eventually all of what she needed, filling the basket up to the top. Once she did Yoshi would return, zipping back to turn the mission in.
_________________