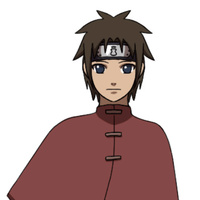 Son'Rei felt as if he had been walking for days, his knees weak from the long trek through the sand. In truth, it had only been a few hours since he snuck out of the Fujio compound. Leaving on his own in the dead of night to find the Village Hidden in the Sand, the sun was now rising over the horizon and he had no doubt once they realized he was gone they would come after him. He had hoped to have found the village before the sun rose, but it would seem that was not going to be the case. It was not as if the boy did not want to be in the sun perse, but he knew the light of the sun would increase the chances of the Fujio finding him. The boy knew he had to keep moving until he found the village, as he topped yet another dune in the endless sea of dunes the young Fujio saw something in the distance.

"Can it be, have I finally reach the village?" Son'Rei would have jumped for joy had his legs not been so tired from walking all night. It wasn't until he was closer that Son'Rei realized that it wasn't the village, it was just an Oasis. Son'Rei would let out a sad sigh as he dropped down into the sand next to a tree, "I'm never gonna find the village, this is hopeless. Maybe I should just turn back." Son'Rei contemplated as he looked around the Oasis, his legs were too weak for him to keep going or turn back. He would just have to rest here a bit gather his energy and then decide from there, he thought to himself as he slowly closed his eyes to rest.
Ei Kanagawa

A stroke of black would rush down the canvas, and then another after that. They were quick, but nothing new to Ei. She was famous for her incredibly quick brush strokes among the artistic community. Speed was of the essence, and she had more than enough coordination in order to paint as fast as she did. Coming out here to a location like this she might paint through two dozen canvases with the same scene before she settled on one she was satisfied with. The imperfect ones would all have to be disposed of, and then she would be able to take the final copy back to decide on whether or not to publish it. All of it was very time consuming. So she had to be fast.

This was the most color she had seen in a while too. The Land of Wind was much too brown. All of it was just different shades of sand. It got boring after a while. Still, Ei was supposed to portray the world as it was. If the world was brown, all that meant was that she would have to buy an exceptional amount of brown paint.

Coming here though did let her use a bit more green and blue. Which was nice.

She would find her focus disturbed though. The sad words of a young child. They didn’t mesh with this scenery, being on the border between proliferation and struggle. Her eyes would flicker away from the paint and canvas, and it would only take her a moment or two before the child would be found. That they were only a child was something of a shock. So small, so weak and tender. It was a surprise that something so delicate and gentle could survive to reach an oasis like this centered in unforgiving deserts. It felt like a miracle.

“Looking for a village, sweet child?” She would coo over to the boy, calling down to him with a sweet smile. “You’re so close now, but why don’t you come and sit with me? I’ve been so lonely painting here alone, won’t you give me your company before heading off?”
_________________

The sound of another voice surprised Son'Rei, yet soothed him at the same time. To the boy it was the voice of an angel, looking to find the source of the voice Son'Rei was met with the sight of a young woman not far from where he was. He didn't know if it was because his vision was weak from how tired he was or if it was because of the woman's natural beauty, but it was as if there was a glow about this woman. Son'Rei would rub his eyes to ensure the woman wasn't a mirage but she was still there, maybe she was an angel here to take him away. He had died here in the desert, never reaching his destination. The thought quickly fled his mind, he doubt he would feel this weak if he was already dead. "Are you real?" He asked in a weak voice as he stood and began walking slowly closer to the woman, "do you know where the village is? Will you please take me there? I wish to serve the Sand Village." Son'Rei nearly collapsed next to the woman, his legs simply could not hold him anymore.
Ei Kanagawa

The questions would cause the already smiling woman to erupt into a slight laughter, one which she would cover with the sleeve of her kimono. It was adorable. Already she became fond of this mysterious child. The way he drug himself closer and closer to her, it was clear that he was trying so hard. It was commendable for someone of such a young age. That he had collapsed next to her would be fine. He had already come more than far enough. Gently Ei would reach down to pat at the boy’s head, a small sign of comfort in return for him dragging himself this far.

“Yes, I know where Sunagakure is. I can even take you there.” She would let herself play with his hair idly, although she would be quick to notice how dirty it was. Not only did it seem that the child needed a rest and a good meal, but also a bath. That could be easily arranged though. “First though, before you close your eyes… won’t you tell me your name, child?”

As he fell next to the woman, she moved her hand causing him to flinch slightly in anticipation of her striking him. The woman's touch however was as gentle and soothing as her voice, the woman was indeed strange to the boy having never known kindness such as this. Son'Rei would get so lost in the bliss of this strange new feeling washing over him that he almost did not register the woman asking for his name, despite the woman's kindness towards him with what he had been through he hesitated on whether or not to trust the woman. Having never seen the woman before and the fact that she was far too kind to be involved with those who he was fleeing from, finally after a moment or two the boy would speak in a low timid voice as he continued to relax while the woman played with his hair.

"My name is Son'Rei of the Fujio Clan, I wish to be a shinobi but they won't let me. I must reach the village before they find me and make me go back, if I'm a shinobi they can't tell me what to do anymore." The last of the words held a slightly aggressive tone too it, yet somehow still soft and timid as if he was afraid to say it too loudly.
Ei Kanagawa

“Son’Rei” She would repeat it, just to hear how it sounded off her lips.”That’s a wonderful name. A strong name. It’ll make a wonderful name for a new Genin in Sunagakure no Sato.” She would say, just to soothe him. He was just a cute child, and as a result Ei couldn’t help but want to pet him and comfort him. It was a natural maternal instinct. What he said brought along a certain amount of surprise though. Not his name, but the Fujio Clan. That he had run away from home and into the deserts to try and find Sunagakure, just so he could escape his family. She couldn’t know his past, but if such a small child found such a thing to be necessary, and would have the resolve to come all this way, she couldn’t dismiss their desires.

Her hand would leave his hair, and Ei would stand up from her stool. It seemed that her time painting here, in this oasis, would temporarily come to an end. A small scroll would be slid out of her kimono’s sleeve, and the stool and easel she had been painting with would be sealed back into it. This sort of casual fuuinjutsu application made transporting painting supplies easy. After she had cleaned up her workstation Ei would return her attention to the child. Son’Rei.

She scooped him up. Even if he hadn’t collapsed in full, there was no telling when he would. They were still a good distance away from Sunagakure. It was about a six hour journey back home, and there was no way that this child would be able to make that journey in his condition. Especially as it appeared he would faint at any moment.

“I’ll take you there, and then we’ll work together on getting you something in your stomach, and a nice bath. Doesn’t that sound nice?” She would say with a smile as she looked down at him. Carrying him might have been something that the scared and vulnerable boy objected to, but it was the only way this would work, and so Ei would do her best to make it as comfortable for him as possible. With the child in her arms she would exit the oasis, beginning the journey back to the village.

The woman stored her stuff that was laid out, before leaning down and picking him up in her arms. Son'Rei didn't object, not that he had the energy to do so even if he had wanted too. No the boy was weary from his journey and he was lost in the bliss of this new feeling he had not known before this woman, the woman was his angel and she promised to take him to Sunagakure and the boy trusted her.

It would not be long before the boy was asleep in the woman's arms as she carried him the rest of the way to Suna, his dream of being a shinobi would soon begin and he would have this woman to thank.