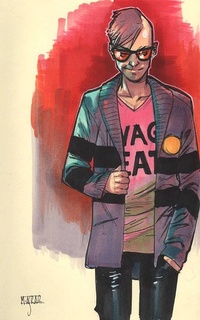 Here with the ruling:

Nozomi's Use of Petal Propulsion:
In the topic, Nyg brought up this quote from the rules:

"-Any Techniques or Abilities used, whether they are by your character, an item, or anything else, must be noted at the end of your post. This is to avoid player deception that could lead to conflicts and arguments."

This rule is true. However, Nozomi did in fact state the usage of her Petal Propulsion Technique in her previous post. Given Shimiko did not actually preform anything to inhibit Nozomi's actions it is expected that Nozomi's Petal Propulsion Technique was executed without any delay. It would be pointless to mention a technique again that was already paid for and used when the actual technique used was not impacted by Shimiko's post. This would be confirming something that was already confirmed in the previous post. Seeing as Nozomi mentioned the usage of Petal Propulsion in her previous post she had already followed protocol.

Player A and Player B are sparring.

Player A uses Body Flicker to clear 10 meters between himself and Player B and uses Fireball Technique.

Player B performs Waterball Technique the moment Player A leaves.

Player A acknowledges the Waterball during his Body Flicker and uses Earthball to counter, instead of Fireball.
___

Player A will not be required to pay for another Body Flicker activation nor is he required to mention he used it again because the only content that changed in his post was the follow up technique, not the usage of Body Flicker.

Shimiko's Use of her Melody Arm Speaker:
The Melody Arm itself is really just a unique tool to produce the sound needed to channel the Sound-based Ninjutsu. A movement with the Melody Arm tunnels air into the design producing the ringing sound. This allows the technique to be cast.

The technique actually works by manipulating the sound waves. In the anime Dosu is seen channeling the sound waves (although not actually visible it is displayed for the viewers) into a beam or stream of chakra-infused sound to attack the ear of the opponent directly. This can be seen at 15:02 on this video clip depicting its use: https://youtu.be/QtIEStclVEk?t=902

That being said, the user can only manipulate the "sound-enhanced chakra" where the sound is present. It uses the sound as a medium to execute it. The technique is only effective within a certain range. Dosu's OG version shows it being used only at close ranges (0 - 5 m. max.) In Shimiko's version this is 0 - 80 m. with the aid of Focused Amp. Even though sound actually travels a lot further the technique can only be used in such a short range, most likely due to the complexity of manipulating sound to that degree and the strength of the sound produced. As we all know, Sound is vibrations. The range is due to the strength of vibrations. Obviously, the closer one is to the source of the vibrations the louder the sound is due to stronger vibrations present. Very weak vibrations from 100 meters out would be too puny to successful transmit into a successful application of the technique.

So Shimiko is capable of activating her technique and pursuing Nozomi because:

A.) Her Melody Arm Technique isn't heavy enough to be incapacitating (such as using GFA)
B.) The Range of dependent on the strength of vibrations from the speaker, not from activation
There are other technique which allow the total range to move with the user, such as Elemental Dragons. This is due to the remote control from the user and the dragon. So this is something that is already standardized

As a Final Ruling: Shimiko successfully pursues Nozomi and connects with all attacks aforementioned. Nozomi is blasted with an S-rank power Sound Technique and perforated by Shimiko's bladed attacks. Given her Constitution is B-tier she would be left badly injured with multiple lacerations and stab wounds while under the influence of the S-rank Sound Technique. Although she is not unconscious or near death her performance for the remainder of the fight will be severely hampered unless some of her injuries were healed.
Current date/time is Sat Oct 31, 2020 9:06 am