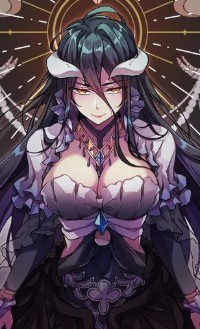 The fuzzy embrace of shadows began to part ways as petrifying white light beamed through. It was the presence of light that reassured Andariel that she was still alive. Eyes raising slowly she immediately recalled where she was. The smell of latex, heart monitors, and her wearing nothing but a hospital gown. Her eyes drew down to the IV placed in her hand. It fed her fluid to help her stay alive. To her abdomen was a feeding tube which gave her the necessary nutrients to keep her body functioning. She had the essentials to keep her alive, but as a succubus she craved more. Deep down her body was starving of the male vitality. She had been sober for at least seven months which was far too long. She could sustain without it, but that messed with her emotionally. Currently she was under a spell of depression. She felt awful. Something she wasn't willing to sit around and do nothing about.

"Oh my~ Has it really been that long? I don't even remember falling. Oh well, I guess I should find my belongings first. They shouldn't be too far..." Reaching to the food pump she'd forcefully remove the needle as it slid out of her stomach and passing her tissue. It was admittedly a bit painful but nothing she'd do more than wince at. The IV on the other hand was just a minor prick and came out with no trouble. Throwing her legs over the bed she struggled to stand on both feet again. She'd stumble at first, but as blood flow resumed to the lower half of her body she was walking again. Her eyes briefly scanned the food pump machine feeling it would be awfully rude to escape containment and leave their machinery on that kept her alive for so long. A red button with a green light on seemed like the most obvious one to switch. Pressing that the machine stopped humming and "nutrient paste" ceased to flow.

Pulling the lace which kept her hospital gown together she'd let it fall on the floor being liberated from the pathetic excuse for clothing. She'd carefully sneak to the doorway poking her head out. Her hair raised up and felt her horn was protruding. Oh of course! I almost forgot to blend in. Forming a simple transformation sign she changed her appearance in the slightest fashion. Her horns disappeared and overall she shrunk an inch. After convincing herself the hall was clear she'd pace quickly to not be spotted before heading into the laundry room. Entering the room there she found what she needed. The only outfit that stood out from the rest. It was a set of armor and a slew of weaponry fitted for her. Gearing up and arming herself she left the hospital with no interruption making her way out to the streets.