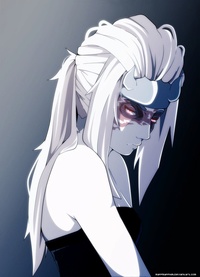 Flashback
Honiko found herself transported to the home of the Dragons via the Reverse Summoning technique. Watahshi Wastelands was located on the far east side of the Ninja Continent. The area was a complete and desolate wasteland. The land was lifeless and inhospitable to all organisms except that of the Dragons. Jagged mountains and hills decorated the landscape but the real center of activity were a ring of volcanoes that steamed with soot and flowed with lava. In the center, of this ring was a bustle of activity as dragons flew to and fro. C lay on a mass depository of wealth his large wings resting over the the billions worth of ryo in gems, cash, and various priceless artifacts. Honiko made her way to his location and stood near a volcanic peak that gushed with lava. The Sage of Dragons wasn't bothered by the intense heat and she waited for C to acknowledge her before speaking. The monstrous dragon craned his neck her way and spoke in a voice so deep and foreboding it made his son, Balerion sound like a child.

"You promised us an apprentice Honiko"

"And an apprentice you will have....in due time. My time. Balerion spoke out of turn to one of my disciples and divulged information that he had no business speaking about. Must I remind you what my Sensei said to you when we first met?"

C's aura could be felt and many of the lesser dragon summons in the area fled. Honiko stood her ground and stared down the behemoth with crimson eyes. C snorted and raised himself to a crouching position as opposed to laying down. He turned to the Sage and spoke with anger seething in his voice.

"I remember well and we have upheld our end of the bargain. Yet you present me with a Demon-lair and a Cursed One. Balerion speaks for me just as you speak for your Master. We are insulted by this offer. He was right to seek alternative arrangements as it has become clear you have no intention of doing so. This Rin Uchiha has promise..."

"Rin Uchiha is off the table. He is not one of mine and I do not trust him."

"He's an Uchiha with an interest in our species. Calm under intense pressure and apparently willing to work on behalf of your organization. He is the one we desire."

"I know nothing of him and he has yet to be thoroughly vetted. Balerion may have turned him into an asset but my Master will not tolerate outsiders sharing in our monopoly of power. There is another....."

C roared into the sky and released a stream of fire so hot and thick that it was essentially plasma. The explosion of anger didn't startled Honiko as she predicted he would react this way. She had nothing to fear from the mighty dragon as her own Master had brought the beast to heel. It was because of him that she wielded the title of Sage of the Dragons. C knew better than to even try and harm her. Assuming he could land a hit on her, any mark on her person would be a mark against her Sensei. It would be an act of suicide. When C was finished with his tantrum she continued:

"There is another warrior whom I have in mind. One that fits your criteria. My organization trusts her which means that my Master will. She will be your apprentice and I expect you to treat her with the utmost regard"

Honiko did not break eye contact with the beast and it was clear by his breathing that he was not pleased although he knew better than to push the issue further. Honiko looked away from him only to gaze around the environment. She noticed that the beast was nowhere to be found. Did he truly believe that his father would be able to spare him of the punishment she had in store for him?

"Balerion must be punished for what he has said to my disciple. I'm not asking your permission but as a sign of mutual respect I'm telling you in advance."

C said nothing and went back to his laying position. He turned away from the Sage but his aura continued to burn brightly. There was a moment of silence that passed between them.

Honiko had only just finished the words when C whisked her back to the Hospital in Kumogakure. He had been chastised and humiliated but given who Honiko was and who she represented he was powerless to fight back. He remembered all too well what her Master had said to him some years ago but more importantly he had remembered what the man had done.