Embark on a Journey 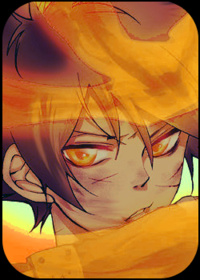 Embark on a Journey

Takeo strides on up to the gates, wearing a black suit and tie with his gloved hands swaying from side to side with every tap upon the ground his dress-shoe bearing feet makes. Despite being recently appointed as the Head Strategist of the village, ultimately his own personal agenda lied less in staying within the village's walls and more about collecting information for it, as well as recruiting members for Firewatch. He had already gotten the clearance prior, so with the various preparations he made he could now afford to get a move on.

With a brief glance of his warm brown gaze to both of the guards at the gate, the Yuki offers a brief nod and a flash of a relaxed grin, before heading on out. The only things indicating that he's a shinobi on his person are the two hip pouches parallel to one another, hidden beneath the jacket of the fully black suit. If anything he looked more like some business man at the moment, funnily enough. That was alright with him though; he digs suits more than he does standard shinobi attire anyways.

'See you in a bit, Kirigakure.' The brunette remarks, elevating a single hand. The seal of confrontation is formed and following that, mist collectively encapsulates his form, obscuring it from view for just a brief moment. Following that, half of the Tiger handseal is formed and chakra kneads, circulating through his body. In a gust of speed that disperses the mist as soon as it was formed, the Flame Emperor has departed from his misty home.

Re: Embark on a Journey

Takeo silently strolls back on up to the village, maintaining a rather stoic expression as he moves along, slowly approaching the gates to Kirigakure. He's easily recognized upon his entry, something which he dismisses from the moment he's close enough to gain clearance into his home. The brunette moves onward through the gates, heading off to the administrative building to hand in a report of his meager findings.